Create a speech on "Looking for Alibrandi"

“Looking for Alibrandi” is a film which develops the notion of changing perspective through focusing on the central character Josies search for identity and belonging in the world and her relationships with other characters. Moreover, the use of music and camera shots is applied to certain scenes to emphasize Josies attitude and feelings.

The use of voice over is applied throughout the film by the main character Josie Alibrandi as it constantly reveals personal ideas and impressions from Josies point of view.

Don't use plagiarized sources. Get your custom essay on
“ Create a speech on “Looking for Alibrandi” ”
Get custom paper
NEW! smart matching with writer

During her final year of High school, her life is turned upside down. However, as she matures from being a very rebellious and determined girl to a more responsible and experienced young woman, perspectives of her own identity, her culture and the people around her change drastically.

In “Looking for Alibrandi” changing perspectives is demonstrated through the concept of cultural background, Josie has to come to terms with her Italian heritage including Tomato Day or as she likes to call it National Wog Day, because her culture makes up who she is.

Proficient in: Looking For Alibrandi

Italian music is applied to this scene to represent there Italian culture and to allow the audience to gain some knowledge and understanding about their traditions and customs. Also, fast paced music is taken over towards the end of the scene to indicate the way she feels rushed and embarrassed about her culture.

A key event in the film that changes Josies perspective is the meeting of her father, Michael Andretti. Initially, Josie is hostile to her father and unsympathetic to his explanations.

However, as certain events unfold, Josie begins to admire him and sentimental piano music is plays to convey the positive attitude she had towards the idea of having a father figure.

Furthermore, another change in perspective is identity. Primarily, Josie believes due to her ethnic background, she was looked down upon. However, the experience of a close friends death causes her to realize the importance of family and that others have it much worse than her.

In relation to John Bartons death, a close up of Josies face is captured to display her devastated yet numb expression along with harmonious tunes to mirror Josies grief.

In conclusion, as demonstrated in “Looking for Alibrandi”, changing perspectives is an ongoing process in life and is can be both positive and negative. Without this process in life, a person cannot adapt to new situations and present themselves in life.

Create a speech on "Looking for Alibrandi". (2016, Jul 07). Retrieved from https://studymoose.com/create-a-speech-on-looking-for-alibrandi-essay 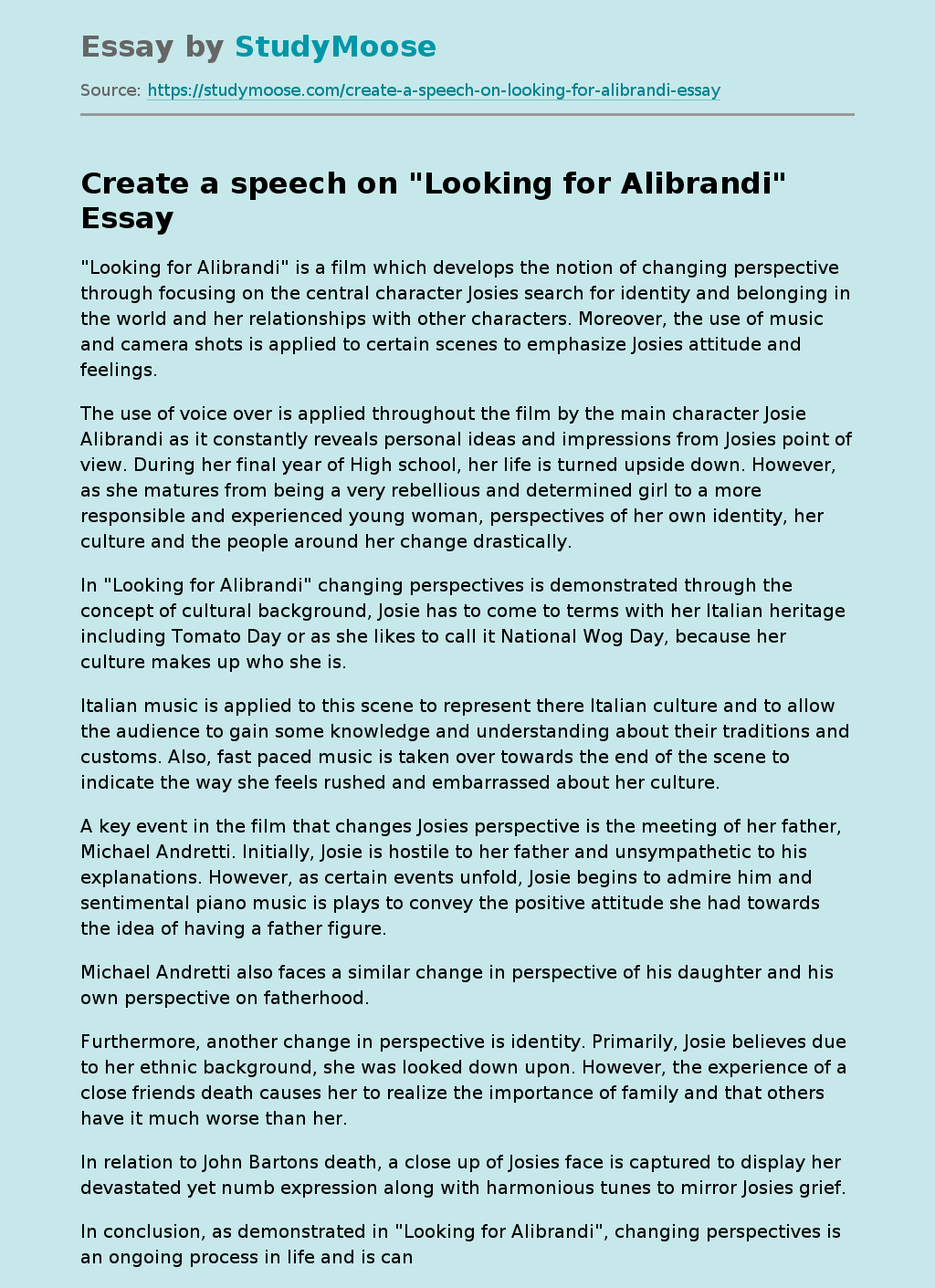