Crash the Movie, Crashing Into Prejudice

Numerous movies have been produced for society that address racial prejudice and stereotyping. The movie Crash is just such a movie. However, this movie takes a more impartial approach than most. The action is shown in a collection of vignettes highlighting the story of several characters over the span of two days in Los Angeles, California. The characters are victims of prejudice in one scene only to be the offender in a different situation later in the film. The stereotypes run the racial gambit from White to Latino to African American to Asian American to Middle Eastern American.

Turn in your highest-quality paper
Get a qualified writer to help you with
“ Crash the Movie, Crashing Into Prejudice ”
Get high-quality paper
NEW! AI matching with writer

The film begins and ends with a car accident. The first one is between an Asian American woman and two LA detectives, one female Latino and one African American, Det. Waters and Ria. The Asian American lady is visibly upset and blames the Latino woman for the accident. Because of her accent she mispronounces the word braked and it sounds like “blaked”. The Latino woman proceeds to mimic her in a prejudicially sarcastic way.

This approach to the beginning of the film supports the view that prejudicial attitudes exist among members of both dominant and minority groups (Parrillo, 2008).

The next scene begins with the word “Yesterday”. A Middle Eastern man and his daughter are in a gun shop. He is arguing with his daughter because he is trying to buy a gun. The clerk yells at him and calls him Osama. The clerk then tells him to “plan his jihad on his own time”.

The older man takes offence and starts arguing with the clerk. The daughter gets her father out of the shop and returns to either get the money back or the gun. She then picks out a box of shells because they come free with the purchase of a gun. The box is full of blank cartridges.

Later in the film this is a pivotal choice as the father uses the gun when he gets frustrated with what he believes is unfairness from a Latino locksmith, Daniel. The prejudice the clerk showed was rejection of a certain people solely on the basis of their ethnicity or membership in a particular group (Parrillo, 2004). The next scene outlines a perfect example of stereotyping by a dominant and a minority group. It is of two young African American men, Anthony and Peter, dressed like college students leaving a restaurant. As the youths walk up the street they are met by a well dressed white couple, D. A.

Richard Cabot and his wife Jean. As they near each other the woman grabs her husband’s arm in fear. This is indicative of the stereotypical belief and selective perception of the wife that all young black men are criminals and dangerous; a cognitive condition described in the textbook (Healey, 2012). This enrages Anthony and he begins to complain to Peter. Anthony reveals his selective perception of the incident by implying that all white people are over caffeinated and the whole LAPD is trigger happy. We know there are African American officers in the force but at this time Anthony is grouping people by association not by race.

However, Anthony and Peter go on to hijack the white couple’s vehicle by gunpoint thereby confirming and reinforcing Jean Cabot’s fears. Now the scene changes to another crime scene. In this scene we see Det. Waters and Ria again. They have just arrived at an off duty officer shooting that happened during an alledged road rage incident. They are very surprised to find out that the white man standing by the cars and the dead African American man are both police officers on the LAPD. This is the third time a white cop has killed a black man.

The next vignette shows the D. A. ’s house and the Latino locksmith, Daniel, changing the locks on a big house. Jean begins her tirade by telling her husband that she wants the locks changed again tomorrow because Daniel is going to sell their new keys to a gang because he is a Latino and they are all gang members. Her husband questions this and she then begins to reveal herself to be a deeply prejudiced person who is totally immune to the information her husband is trying to tell her (Parrillo, 2004). The D. A. reveals his total ignorance and indifference to minorities by his cynicism and he does this in front of his assistants, one who is African American.

The movie goes on to highlight several more incidents of racism and prejudice that include all of the characters, either as victims or offenders. There is the sexual assault of the African American woman couple by the white LAPD officer, Ryan. Ryan exhibits the action-orientation level of prejudice by his discriminatory actions (Parrillo, 2004). There is a scene of the Middle Eastern man walking into his store after it has been broken into. There is graffiti on the walls with the racial slur “raghead” written there. The wife comments that they are Persian not Iraqi and wonders why people can’t tell the difference.

The man finds out his insurance will not pay for the break in because earlier Daniel the locksmith had told him to buy a new door. In his frustration his displaced aggression and anger is transferred to Daniel because the insurance company seems to be an untouchable target (Parrillo, 2004). There is a vignette when Anthony and Peter do something good for another minority. When they accidentally run over the “Chinaman” they do take him to the hospital. Later we find out the Asian man was participating in human trafficking.

Officer Ryan does redeem himself in the end by saving the same woman he violated. He pulls her from a burning car. The Middle Eastern man finds Daniel’s address, waits for him and steps out of his car to shoot Daniel. Daniel’s daughter runs out to protect her daddy with the invisible cape Daniel gave her earlier. This invisible cape is supposed to block bullets and Daniel gave it to his daughter one night when she was scared. This is when the blank cartridges come into play. The man doesn’t know they are blank and believes he has witnessed a miracle because the little girl is unharmed after he shoots her at point blank range.

We find out that Peter is Det. Waters’ brother. Peter is shot and killed in Det. Hanson’s car by Hanson when he exhibits an emotional level of prejudice (Parrillo, 2004). Hanson shoots him out of fear and distrust. His body is thrown in the ditch and Hanson drives away to burn his car and get rid of the evidence. Jean comes to terms with her anger and after she does she falls down the stairs. Her Latino maid is the only one to help her. She realizes that Maria is a nice woman who happens to be Latino and her friend.

Even Anthony has a redemption scene when he goes back to get the “Chinaman’s” vehicle and tries to sell it to a chop shop only to find out it has human slaves in the back. The buyer wants to buy the slaves too and offers Anthony more money. Anthony gets the van back and releases the people on the street. He then gives them some money to get something to eat. Prejudice has been shown by this movie in many levels and strengths. The stories are interwoven to show how prejudice affects everyone in an ever-widening circle. There were also many stereotypes; the black LAPD officer’s younger gang banger brother, the white clueless D.

A. ’s pampered, prejudiced wife, and the white racist officer, to name a few. The movie was stitched together well and easy to follow without getting lost in the plot. REFERENCES Haggis, P. (Director) (2004). Crash [Theater]. Parrillo, Vincent. (2008, 04). Causes of Prejudice: the Sociology of Prejudice. Retrieved from FHSU BB. Multiculturalism in a Democratic Society. Blackboard on March 2, 2013. Healey, J. (2012). Race, ethnicity, gender ,and class the sociology of group conflict and change. (6th ed. ). Thousand Oaks, California, USA: SAGE Publications Inc.

Crash the Movie, Crashing Into Prejudice. (2017, Jan 19). Retrieved from https://studymoose.com/crash-the-movie-crashing-into-prejudice-essay 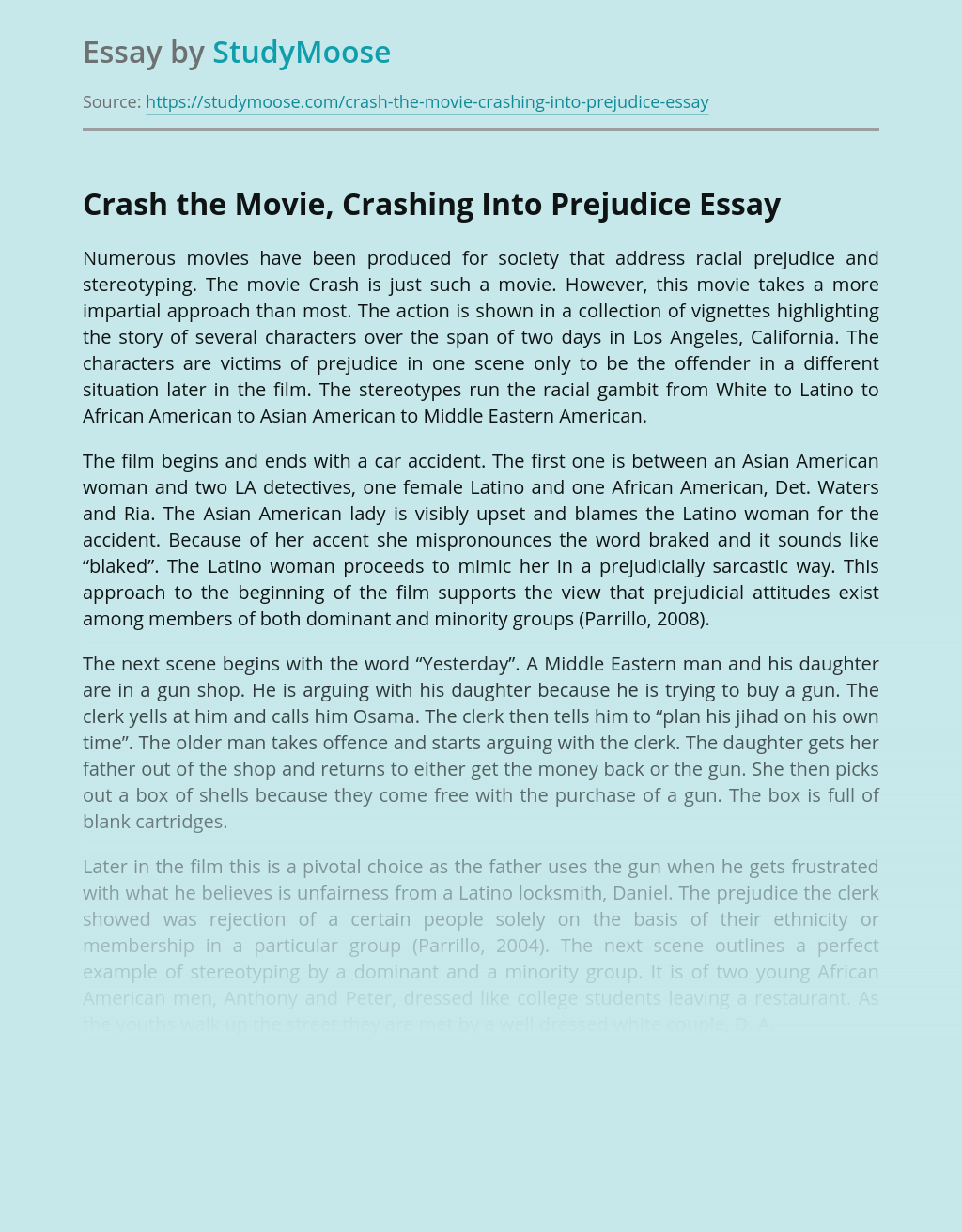 Turn in your highest-quality paper
Get a qualified writer to help you with
“ Crash the Movie, Crashing Into Prejudice ”
Get high-quality paper
Helping students since 2015
Stay Safe, Stay Original