In the summer of 2006, following the constitutional changes that came in the wake Slobodan Milosovich’s rule that ended in the 2000 general election, Montenegro held a referendum which preceded its declaration of independence from Serbia and Montenegro; in response to this the former declared itself a republic through a special parliamentary session. These events were brought by several factors including the signing in 2002 of the Belgrade Agreement that allowed for the Union to be restructured besides the assassination of the Serbian prime minister in 2003 which was following by the formation of a minority government.

Don't use plagiarized sources. Get your custom essay on
“ Country profile ”
Get custom paper
NEW! smart matching with writer

A general election was held in 2004 that saw the election of Boris Tadic as the first Serbian president elected democratically. By the constitutional charter of Montenegro and Serbia, the latter inherits the state of the union and with it the membership to the United Nations as well as other bilateral and multilateral associations (Edmunds & Timothy, 2007).

The Serbian republic has a population of 7,498,001 spread over an area of 84,361 square kilometers who are in the main ethnic Serbs, Bosniaks, those of Romanian extraction, Albanians as well as Croatians, Bulgarians, ethnic Hungarians and Slovaks among other minor sub groups.

Culturally, the national languages spoken in the country include vary depending on the ethnicities while the major religions include Islam and Christianity with the Roman catholic church and the Russian orthodox having a particular presence.

Geographically the country is located in Central Eastern Europe bordered to by Macedonia, Romania, Croatia, Bulgaria, Hungary as well as Bosnia. Economically, Serbia faced a gloomy time in the wake of the collapse of the Soviet Union compounded by the political conflicts that rocked the Balkans devastating the economy so much so that by the year 2000, inflation was at 100%, GDP had fallen by more than half from 1990 while poverty rates had effectively doubled.

The social, political and economic reforms by the new government as well as increased integration of the nation with the EU and other international institutions have been at the core of the positive economic outlook and the relative political stability (International Monetary Fund, 2006b). Though agricultural output declined in the year 2005, the strong showings of industrial growth (grew by 1. 3%), rising trade, developments in the construction as well as in the financial services spurred the economy to grow by more than 6. 3%.

Inflation rate fell in the year 2006 to 11% compared to 17% in the preceding year fueled by growing demand, rising fuel prices, linking of prices to the exchange rate among other factors. In the same year, the budget surplus was 0. 6% of the GDP while the country’s current account deficit with the IMF has reduced to just over 11. 2%. These improvements were mainly attributed to expanding export growth coupled with a contraction in imports, increasing foreign investments which rose by 7. 7% of the GDP; foreign loans have soared by 7.

6% of the GDP while Serbia’s foreign exchange reserves rose to more than $5. 2 billion. It even gets better; the country’s debt service ration has risen to 6. 8% of the GDP even though the country’s debt to GDP ratio has kept high at 61% of the GDP (International Monetary Fund, 2006b). Serbia is already a member of the World Bank and the EBRD which have been crucial in the bankrolling the development strategies and it is making progress towards accession to the WTO and the European Union. Accession to these bodies would require greater changes to which the country faces varied challenges.

It attempts to comply with the Copenhagen criteria have been marred by the status of Kosovo which declared independence from Serbia in February>In addition, dealing with its past, and its cooperation with the international criminal court in trying and apprehending suspected war criminals notably Ratco Mladich and Radovan Kartdich among others was found wanting, not least because the suspected criminals still have political influences in the country and attempts to hand them over to the Hague may stir up political difficulties.

Other problems include border conflicts with her neighbors in the Balkans after the wars that resulted in borders being changed but without clear boundaries (Smith, 2002). Long standing political tensions inherent in the Balkans and in the Serbian case, the issue of Kosovo as well as Montenegro will remain a challenge to the Serbian economy as well its political ambitions to join the European Union.

Even though the three ‘countries’ were not badly scathed by the global financial crisis especially due to a low capital market integration with the European Union countries, this very fact has come in to haunt them, growth has stagnated due to a decline in remittances into the country as well as decline in the demand for the region’s exports (Hinton & Mercedes et al, 2008). Even so, Serbia’s efforts to join the European Union though facing opposition are in the right direction and its compliance with the Copenhagen criteria would bring its institutions and laws to EU’s standards that would in turn confer a measure of stability to the country.

Already the country’s membership to the EBRD and the World Bank has borne fruit by provision of emergency loans to fund its development programs but also helped the country avoid recession following the global credit crunch. The out look for Serbia is as positive as it is fragile. Reference: Arandarenko, Mihail & Mijatovic, Bosko (2008). Reforms in Serbia: achievements and challenges. Belgrade: Center for Liberal-Democratic Studies. Edmunds, Timothy (2007) . Security sector reform in transforming societies: Croatia, Serbia and Montenegro. Manchester:Manchester University Press. Hinton, Mercedes et al (2008). Policing Developing Democracies. 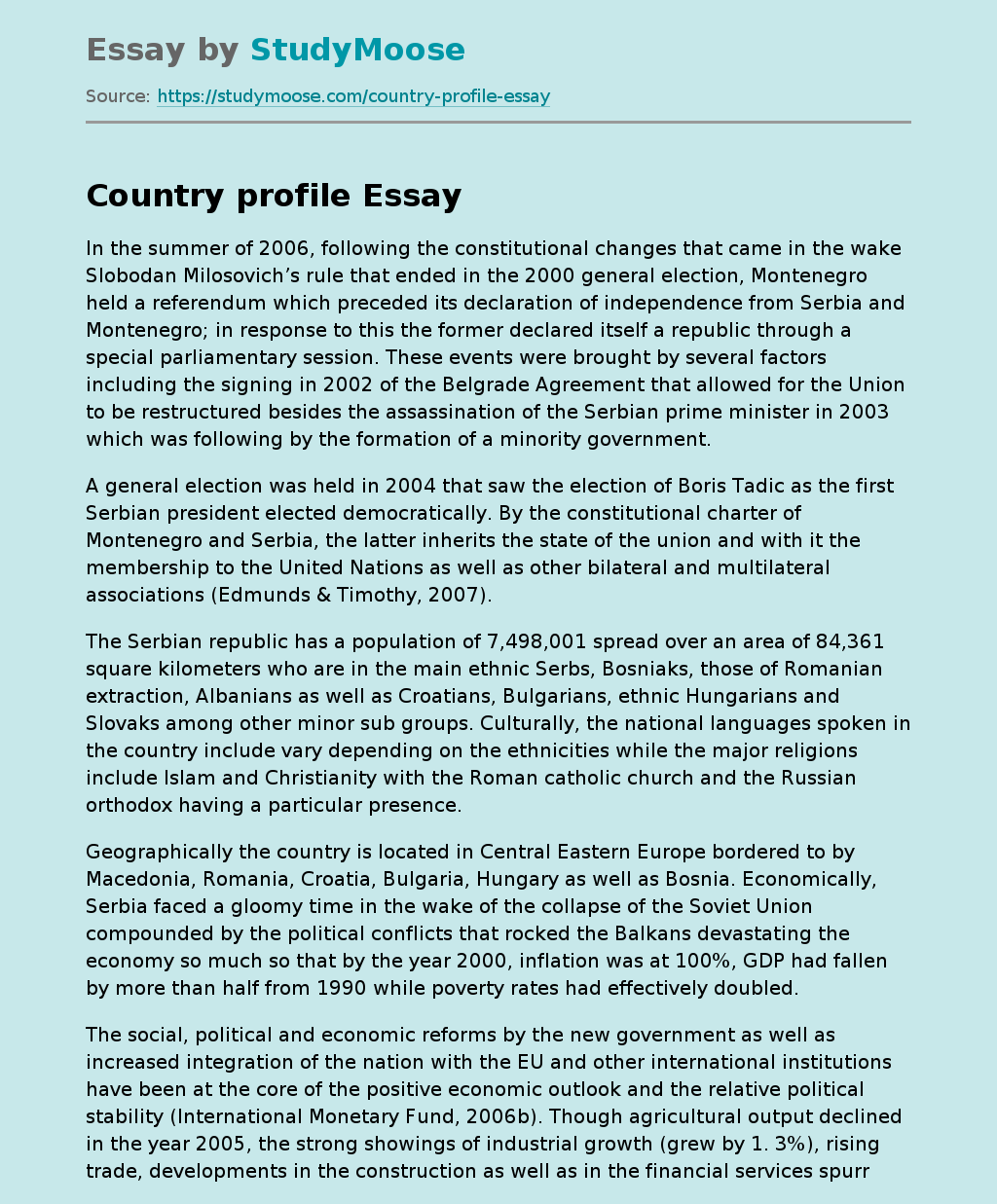