Coulda been in the movies, an had nice clothes

John Steinbeck’s novel “Of Mice and Men” was published in 1937 and is centred around two characters, George and Lennie, who are looking for work in the midst of the Great Depression. The story is set in a farm outside Soledad, California (Spanish for solitude), the name of which hints at the deeper theme in the novel. It was inspired by a real-life experience of Steinbeck’s; he told a New York Times reporter in 1937 that “Lennie was a real person.

Don't use plagiarized sources. Get your custom essay on
“ Coulda been in the movies, an had nice clothes ”
Get custom paper
NEW! smart matching with writer

He’s in an insane asylum in California right now. I worked alongside him for many weeks. He didn’t kill a girl.

He killed a ranch foreman”. Through the study of loneliness and effects on his characters, Steinbeck tells us that this tragedy happened as a result of ignorance and isolation. In this essay I will discuss the themes and effects of loneliness on each character, and show that people who are united by loneliness prey on each other when they should be cooperating.

One character who clearly shows the negative effects of loneliness is Curley, the boss’s son. Curley’s inability to make friends and distrustful nature results in his enforced isolation from others.

His resentment at his own shortness manifests itself by subconsciously punishing people who are taller than him. His contempt and jealousy for taller people provoke him to assert his muscularity over them, and in so doing proving to them, and to himself that his height is not a debilitating issue (“seems like Curley ain’t givin’ nobody a chance”).

This unwillingness to accept his height and resentment towards taller people prevents him from making friends, which fuels his loneliness.

His wife’s refusal to touch him is, to him, a betrayal, and only exacerbates his distrust towards others. Her insistence that her husband keep his hand gloved in Vaseline is her attempt at exerting control over him. She does this to highlight her own feelings of revulsion towards him. Curley’s anger at his wife’s rejection is deepened by her flirtatious attitude to the workers, (“Well. What the hell was she doin’? “). Curley’s own behaviour has manifested itself into a vicious circle whereby he is creating a situation he wants to escape from.

In conclusion Curley is a victim of self-imposed loneliness, the debilitating effects of which manifest themselves through aggression and suspicion towards other characters in the novel. Curley’s wife also embodies the theme of loneliness in that she is the only significant character who is not given a name, merely known to all as the wife of the boss’ son. This fundamental lack of identity suggests that her personal thoughts and feelings as a woman are of no consequence to society independent of her husband, or indeed any of the other characters, and her only endearing quality is to belong to another.

It is shown through her readiness to believe her mother capable of deceiving her that she does not enjoy a close relationship with her family. Once discovering her mother’s alleged deceit she decides to leave, and so, orchestrates a marriage with Curley as a means of escape. This refusal to accept culpability for her own mistakes with the “man from Hollywood”, and belief in her own self-importance, lands her in a situation of abject loneliness whereby she is estranged from her family and settled in an unhappy marriage with someone whom she does not love.

Coulda been in the movies, an had nice clothes. (2020, Jun 01). Retrieved from https://studymoose.com/coulda-movies-nice-clothes-8406-new-essay 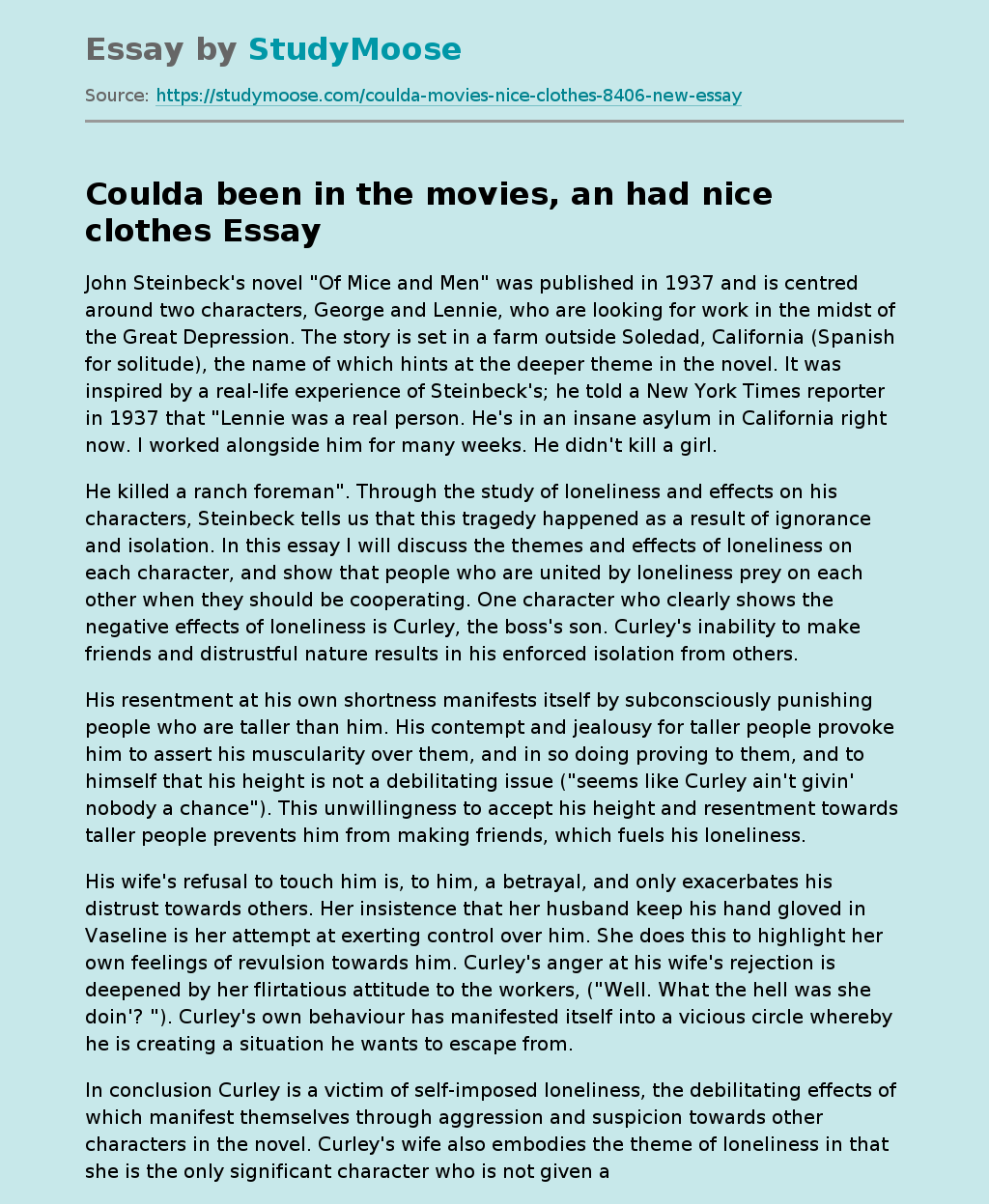