Cosmetic Surgery in the Philippine Setting

In our paper, we will find out if all people would consider cosmetic surgery as recourse to enhancing oneself and one’s sexuality.

This research paper attempts to answer the questions raised before, that is, who are willing to undergo these operations for the sake of beauty? And what do the young Filipinos of this generation think about cosmetic surgery? Also this paper aims to enumerate the reasons why or factors operating on the decision of why people undergo cosmetic surgery.

Don't use plagiarized sources. Get your custom essay on
“ Cosmetic Surgery in the Philippine Setting ”
Get custom paper
NEW! smart matching with writer

This research has been conducted through the distribution of survey forms among selected respondents. These respondents were 74 randomly selected (read: disregarding gender, social status, religion, etc. ) young Filipinos ages 18 to 25. Each respondent was then given the following questions to answer:

Pat (real name withheld for privacy reasons), a thirty-seven year old government employee, is one such woman who has undergone cosmetic surgery.

She had a nose lift just this summer. She recounts that she wasn’t really planning or saving up for an operation. She was normally dissatisfied about her nose, but only when her American boyfriend based in the States sent her money did she actually consider having one. She cites that financial constraints are the foremost problem why she never considered cosmetic surgery before.

“Hindi naman kami mayaman, parang artista lang na ‘pag may ayaw sa katawan, punta lang kay Vicky Belo,” she says. So when the opportunity came and that impediment was eliminated, she went for it.

She claims that the surgery had generally benefited her, her looks had improved. She says her boyfriend was happy with the results, and she is happy too that she didn’t look like the “probinsyana” she was before. But Pat has some issues with public acceptance. Some of her family members in Camarines Sur, for example, have renounced her for doing such a thing. She says that people seem to be flabbergasted when they learn of her nose job. She also explains that Filipinos are “too conservative”, they tend to look down on people who had modified her looks with the help of surgery.

The first question in the survey aims to determine the percentage of people who have and have not undergone cosmetic surgery. 3 answered yes and 71 answered no, which is 4. 22% of the whole sample. As expected, very few young Filipinos have undergone cosmetic surgery, for reasons we can assume safely to be that they do not have the money needed even if they want to, or that they do not need nor want it yet. The three respondents who had undergone surgery had the following kinds of operations: laser, stitch, and auxiliary. These procedures have been used by these respondents to correct some form of damage, like reconstructive plastic surgery.

They had the operation because they had to, not because they want to change their physical features. In effect, very few young Filipinos have undergone cosmetic surgery because they do not need it at all. Based on the group’s assumption that financial capabilities are the primary impediment for having cosmetic surgery, that factor has been eliminated in the next question. 35. 14% of the respondents said “yes” while a bigger percentage of 60. 81% said “no” to undergoing plastic surgery if ever given the chance, disregarding financial constraints and such.

Of those who would agree to have their physical features altered, a big percentage of the respondents responded that they would like to have a slimmer body by removing fats (especially in the tummy area) removed. This is more than those that wanted their cheeks, butts, wrinkles, skin or nose changed. On the other hand, those who preferred their bodies “natural” claimed that they are “already contented” with what they have. Some other people regard physical beauty as only something superficial and that it’s way too much to bother about it for undergoing such procedures.

Other reasons for not undergoing one would be the pain that they have to feel, the cost of operations, and the fear for public disapproval. From these reasons, we can actually deduce that the society in which we have grown up in plays a large role. And our society being as intertwined with religion as it is, give us more factors to consider. The Catholic Church has instilled in our minds to remain natural. Filipino values include “If you were blessed with a beautiful face, then be thankful, otherwise, accept what you have. ” That we think is why most of our respondents would still not want to undergo cosmetic surgery given the chance.

Another thing is that our culture is very conservative; people will tend to think differently of a person after such operations. Take celebrities for example, snide remarks like “eh kasi retokada” directed to those who underwent cosmetic surgeries are common. The mainstream media are also of the essence. The celebrities with perfect skin, faces and bodies set the standards of acceptable beauty and sexuality, so people look up to them in telling whether a person is “beautiful” or not. We have then pinned down the reason why we get such results from our surveys.

These reasons should be without a doubt our culture, which is actually very dependent on our dominant religion. Although standards of beauty are set by the society, it is also the society which prevents most Filipinos from undergoing cosmetic surgery. And the results for question 6 verify this result, 30 respondents believed that cosmetic surgery improves sexuality while 45 respondents believed otherwise. We have a very confident community indeed. VI. Conclusion From the results of our survey, we have achieved our objectives for conducting this research.

The status quo plays a central role in setting people’s standards of beauty and sexuality, therefore outlets such as mass media are essential to building up the norms that Filipino people live by. But then these standards are very unstable indeed, trends come and go. The epitome of beauty a decade ago is not the same as what is “in” now.

From these results, we can pretty much say that the people under the industry of cosmetic surgery should do something to change how the Filipino youth think, or else they would get very little clients. To other researchers, this research paper may be improved by taking into considerations the other age brackets of the Filipino community. Upon doing so, we will see how the Filipino community, in general, think about cosmetic surgery. It would also be helpful to do extensive chronological research spanning a few years before to recognize how the overall taste of the Filipinos vary over time and what socio-economic/cultural factors may be involved.

Cosmetic Surgery in the Philippine Setting. (2020, Jun 01). Retrieved from https://studymoose.com/cosmetic-surgery-in-the-philippine-setting-essay 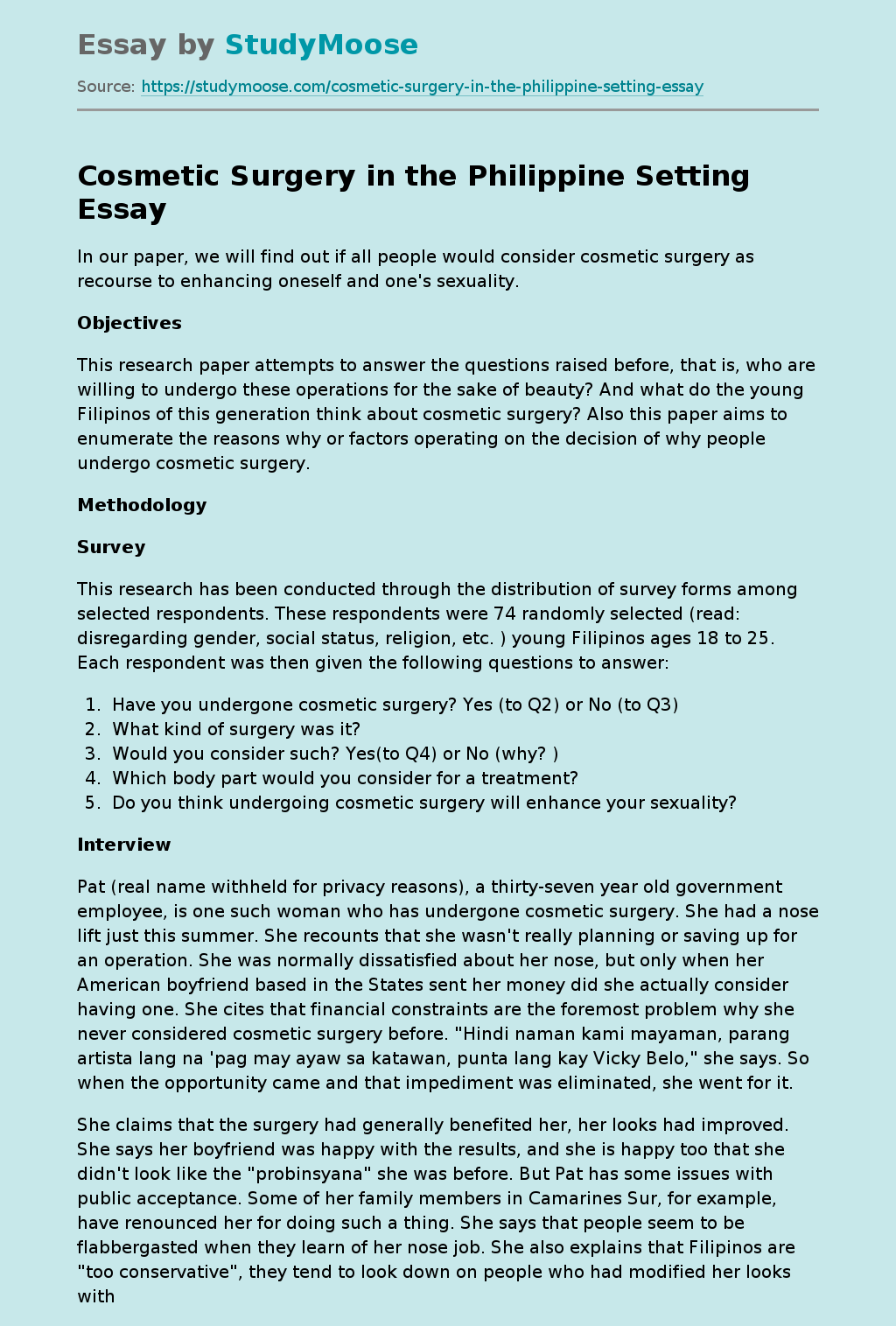