Throughout history, mankind has had innumerable moments of corruption and greed. From the City-State wars in ancient Greece to the organized crime during the prohibition, human beings have always been prey to the desires of wealth and power. While our current society may seem civilized compared to those eras, the shallow traits which haunted mankind then are still in play in today’s society. There are always going to be people looking for a way to get ahead of everyone else, and many are willing to bend or even break laws to do it.

Don't use plagiarized sources. Get your custom essay on
“ Corporate Transparency vs. Corporate Governance ”
Get custom paper
NEW! smart matching with writer

The corporate world today advances the opportunity for corruption unlike any other arena in today’s world, save perhaps politics, but that topic is for another day. As society has matured throughout the centuries, governments have tried to regulate this dark side of human nature to create a fair and even playing field, thus corporate transparency was born. Essentially, the rule of thumb has been the more transparent a company is, the more likely it will follow the laws and regulations.

There has been little resistance to this concept, as most economists would agree that it is necessary to limit corruption. However, one could actually make the case that too much transparency would actually hurt the performance of a company. Therefore, it can be argued that there must be balance for a company to perform at an optimum level and that both extremes, full disclosure and zero transparency, will result in less than optimum performance. The purpose of any business is to make money for its owners and investors.

It is an obvious point to make but still an important one.

Some people are so concerned with growth that they are willing to break laws and hurt others just so they can get further in life, but others are more concerned with building a foundation for the employees and investors alike to grow and make a living within the company. Both types of people have the same motive, financial gain, but their methods for going about it are quite different. It is part of the reason corporate transparency exists; to level the playing field for all involved and make sure that the wrong-doers are being monitored.

However, it is important to understand that everyone, from the entry-level employees all the way up to the board members, is in favor of growing the business, whether it is for personal gain or for the organization. It is the motive behind every decision made. More information means more certainty for investors, which is why investors are always going to want more transparency. It is obvious that low transparency allows decision makers to run amok. Given the opportunity, decision makers can make unethical decisions to expand their own wealth. One of the biggest examples of this is Enron.

In the span of fifteen years, Enron grew from nothing to the seventh largest company in the United States (BBC, 2002). Throughout its tenure, Enron routinely misrepresented its profits and debt, showing that the company was doing much better than it actually was. It wasn’t until October of 2001 that the revelation of the scandal took place. Another example of unethical behavior was WorldCom. With WorldCom, high level executives “used shady accounting methods to mask its declining financial condition by falsely professing financial growth and profitability to increase the price of WorldCom’s stock” (Yahoo, 2007).

These scandals are primarily what led to the most significant piece of legislation in regards to corporate oversight, the Sarbanes-Oxley Act, which “sets guidelines and requirement for accounting, financial disclosure, the ethical behavior of corporations, and the like” (Yahoo, 2006). The evidence shows that a level of transparency must exist for all involved to have assurances that the decision makers have the stock holders’ and investor’s best interest in mind with all of their decisions. Transparency definitely has its place in corporate America as it can also lead to higher performance.

Many investors view transparency as the only definitive input they can get as to whether or not to invest in a company. Quite simply, if someone is considering investing into a company, the only information the investor can draw from is from the financial statements. With better information given in regards to the financial practices within a company, the better decision the investor can make in regards to his investment. Conversely, with very little information, investors may not invest at all due to a lack of information.

In addition to gaining new investors, having transparency within the company can build confidence for the company’s management from current investors. Accurate and relevant information allows boards and investors to make better decisions on personnel. If a board member or investor knows that a certain individual is more forthcoming, it builds trust within the organization, which will lead to more investors and a lower cost of capital. The better the investor-management relationship, the more investors a company will likely gain.

The more information that is divulged to investors, the less of a chance of unfortunate events, and thus transparency itself can actually grow a company (Investopedia, 2010). There are, however, negative effects on the performance of a company from transparency as well. The more information a company publicizes about its financial and commercial practices, the more its competition can entrench itself in its market share. By divulging information about its dealings, it gives a company’s competitors a distinct advantage.

Competitors that have a smaller market share may use the information to gain a larger one, while competitors with a larger market share may use the information to prevent the company from gaining any ground. Furthermore, over-transparency could result in extreme responses from the public. In this age of social media and the internet, companies cannot control their public image nearly as much as they could twenty years ago. Take, for example, the Tylenol murders in 1982 involving Johnson & Johnson. At least two bottles of Tylenol were found to have been laced with cyanide, killing seven people.

By and large, the company handled the situation perfectly. It informed everyone of the situation, pulled the product from the shelves, and rebranded it with new tamper-proof bottles. As a result, Tylenol regained all the lost ground and has continued to sell very well ever since (Morgan, 2008). Compare that with a more recent case, Daniel Bouton, CEO and Chairman of Societe Generale. In January of 2008, Bouton found out one weekend that a rogue trader in his company had generated nearly fifty billion euros in losing trades.

This amount being much more than the company itself was worth, he enlisted a couple of trusted traders and spent several days unraveling the trades and cleaning up the mess. By the middle of the week, he revealed the news to the world but was able to save the firm, only taking about five billion euros in losses (Morgan, 2008). It is the opinion of Nick Morgan of the Harvard Business Review that had Bouton gone public right when he found out about the crisis “the resulting feeding frenzy would have almost certainly sunk Societe Generale, and perhaps precipitated a much wider financial mess” (Morgan, 2008).

Bouton was still removed as CEO a few months after the incident. As the article was written in 2008, Morgan actually predicted that Societe Generale would go under as a result of this event, but it is still in business thanks in part to the actions of Daniel Bouton. In this case, Bouton acted in the best interest of the firm, its investors, and its employees. Yet, in doing so, he withheld significant information from everyone to prevent the word from getting out. It is a clear example showing that more transparency does not always mean better results.

Another example of negative effects from transparency is the threat of repercussions for upper level management. Due to the stringent legislative regulations, corporate executives are more in danger than ever of losing their credibility and positions over non-disclosure. As a result, it incentivizes the corporate executives to over-disclose information just to make sure they are covering themselves (Benjamin Hermalin, 2007). As stated earlier, the more information that a competitor has the better chance it has to either establish a foothold in market share or disrupt the growth of the company.

Over-disclosure, then, would enhance that affect exponentially. Additionally, it can prevent high level executives from taking chances or calculated risks, even if it would benefit the company, for fear of losing their position. A good example of this is Daniel Bouton. Even though he, arguably, prevented the company from going under he was still removed as CEO a few months later, someone else in his position may not have done that. The fear of losing their job, as he did, may have led to them fully disclosing the situation when they found out, which ultimately could have ended the company’s existence.

It is that fear that can drive higher level executives to make decisions that may not necessarily be best for the company, but instead ensure their own job status. Hence, it is another problem created by too much transparency. Transparency has its place for one sole purpose: to oversee the decisions made in a company and prevent any kind of scandal or corruption from taking place. Conversely, too much transparency can actually lead to worse performance as a company. It is the conclusion of this study, therefore, that there must be an acceptable balance in place for a company to perform at an optimum level.

Oversight should be restricted to the dealings and practices within the organization for the purposes of financial tracking and overall debt to equity ratio. Micro-managing into the daily decisions of the upper level management as well as the operational practices should not be regulated, so long as there are no civil or criminal laws being broken. Too much oversight would create an environment too riddled with paranoia and indecision that would, essentially, paralyze the operational practices of the company.

To perform at optimal levels, every member of the organization would need to know their role and work as a team. Investors tend to flock to the trustworthy and low-risk companies, which would result in the most trustworthy companies being the ones that are the most profitable. Since the investors know that management is trustworthy, they wouldn’t need to micro-manage the daily operational practices. They could trust the executives have the company’s best interest in mind with every decision, just like Daniel Bouton. Yahoo. (2006, December 15). 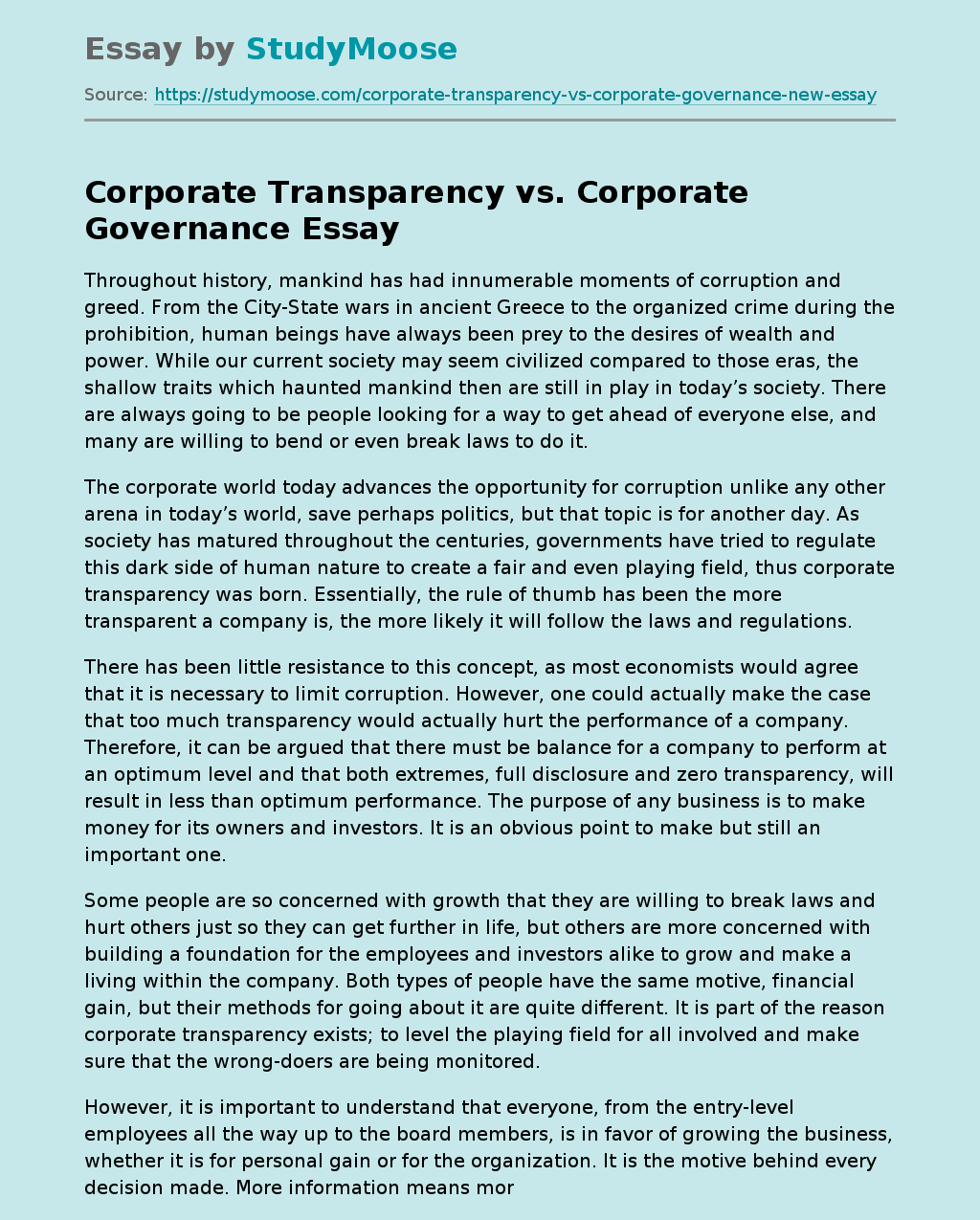