Foreign direct investment (FDI), in its simplest term, is when a company from one country makes an investment into building a facility in another country, or when investments are made in order to acquire a certain stake in enterprises operating outside the economy and country of the investor. FDI plays an extraordinary role for firms wanting to operate and compete in a global business. It can provide a firm with new markets to penetrate, cheaper production facilities, access to new technologies, skills, and financing.

Turn in your highest-quality paper
Get a qualified writer to help you with
“ Corporate Strategy and Foreign Direct Investment in Developing Countries Such as India ”
Get high-quality paper
NEW! AI matching with writer

For a host country or the foreign firm receiving the investment, it can provide many opportunities that are necessary for economic growth and development. FDI can also come in many different forms, such as direct acquisition of a foreign firm, setting up a facility in a foreign country, or investing in joint ventures and/or strategic alliances with local and foreign firms (Kim & Kim, 2006). In the past decade, due to a dramatic change in the way businesses are conducted, combined with loosening of governments’ regulations on foreign investments, FDI has increased dramatically on a global scale.

When companies make decisions regarding FDI, this process require the efficient allocation of funds to investment opportunities, which often require large amounts of money that will hopefully bring greater returns to its investors. With foreign investments being far riskier than domestic investments, the effective and efficient use of funds is critical for the future performance of a multinational company.

Multinational companies that engage in FDI provide a range of potential benefits that extend to the actual investors as well as the host country that is receiving the investment which are quite apparent.

An example within many of these advantages include, increased profits for the industry or the firm due to lower costs of resources abroad, and increase in jobs provided in the host country. However, despite the positive arguments for FDIs there are still also many reasons how or why these type of investments can prove to be harmful.

Domestic firms may consider these investments as unfair competition because the home-market is losing jobs that are instead being set-up abroad. Also, the host country may feel that they are losing their national identity due to foreign cultures and influences being imposed on them. Despite the many benefits that FDIs have provided both companies and host-countries, it is still unsure that such activities will not extend harmful effects to either participant due to the various reasons mentioned above.

A reasonable outline for investments should be set-out in order to allow investors reap the benefits of their investments, while simultaneously contributing positively towards the growth and development of the host-country. The following sections of this report will attempt to analyze FDI effects on developing countries, the means available for companies to invest in foreign markets, mergers and acquisitions, and other issues related to the field of foreign direct investment. Foreign Direct Investment in Developing Countries

Foreign direct investments initiated by MNCs occur primarily because in most cases these type of activities aim to fulfill all MNC’s primary objective; to maximize shareholder value (stock price) by “taking-on” various value-adding activities or investments. As such they are considered as being major contributors to economic growth for developing countries. A host country will usually want to attract foreign investors in order to acquire additional resources such as capital, new technologies, knowledge, as well as increased job opportunities for its population.

Over the past decade globalization has increased dramatically, which has also sparked increasing flows of FDI in developing countries as governments begin to ease up on their regulations. According to publications from the Institute for International Economics, FDI in developing countries, and countries who are in a transition phase of their economy (i. e. China) grew dramatically during 1990-1998, from $24 billion per annum to approximately $120 billion per annum.

Mentioned in the previous section, FDI in theory, as well as in practice, has proved to offer several gains to developing host countries who accept MNC’s investment efforts. From these gains, the major ones that are usually more specific to developing host countries include the transfer of technology that couldn’t otherwise be acquired through investments or trade, development of human capital through employee training, and gains in profits resulting from corporate tax revenues in the host country (Loungani and Razin, 2001).

The fact is that the impact of FDI in a certain country may vary from one country to another country, therefore the degree of FDI impact really depends on the government policies and regulations that are set forth in order to either attract or deter FDI inflows. Therefore, we could concur that government policymakers have the most important role when it comes to FDI decisions. They should be aware of the different methods that could be used to promote FDI and how each of these means would affect the development and growth of the local economy.

Often, policymakers seem to rush into FDI liberalization policies without considering the pros and cons of such actions. However, as the South East Asian economies have well proven to the rest of the world, if FDI can be used strategically, it can be an extremely useful tool for emerging economies and developing countries. FDI in India India’s recent liberalization of its foreign investment regulations has generated strong interest by foreign investors, turning India into one of the fastest growing destinations for global FDI.

Foreign firms are setting up joint ventures in several of India’s fastest growing sectors such as telecommunications, computers software, financial services, tourism, etc. According to a global survey conducted by KPMG International on corporate investment plans in June 2008, India is expected to experience the largest overall growth in its share FDI, and will most likely become a haven for investments within the manufacturing industries. It’s true that India is becoming one of the most favored investment destinations for many developed countries as well as countries whose economies are in a transition phase.

The following diagram shows how GDP per capita growth, trade volumes, and FDI inflows have surged over the years 2001-2006. Within the past few years, Japanese firms are increasingly purchasing various amounts of equity ventures in Indian firms, particularly within the automobile, electronics, and IT sectors. FDI is now recognized as one of the most important drivers of economic growth for India, and as such, the Indian government is making all efforts to attract and facilitate FDI and investment from foreign investors.

India’s liberalization efforts have not only removed national barriers towards foreign investments, but have also made the process of investment activities much easier by establishing various measures. According to India Business Directory (IBD, 1999-2009), some of these implemented measures include:

•Loosening of foreign exchange controls in order to promote greater tradebetween India and other countries •Companies now have significant amount of freedom to raise funds from foreign markets in order to invest and expand their foreign operations in India •Trade between countries is subject to fewer trade restrictions; i. . decreasing tariff levels •Foreign investors can pass on earnings from Indian operations with relative ease As India and its industries continue to develop and expand, more and more investors are attracted to its market with hopes of experiencing great returns. The possibilities of foreign investment in India seem endless with the combination of incentives and benefits that the Indian government offers to foreign investors.

Some of these incentives include tax exemptions due to the various tax treaties that India has with 40 other countries, as well as investment incentives offered by the Indian government and the state (IBD, 1999-2009). One of the major reasons why India has attracted vast amounts of FDI in recent years is due to its FDI policies. According to the Embassy of India website (2009), FDI up to 100 percent is allowed under the “automatic route” in all sectors and activities except for those that are otherwise stated.

Some of these sectors that don’t permit full ownership by the foreign investor include such items that require special licensing; i. e. alcoholic drinks, cigarettes and tobacco products, electronic aerospace and defense equipment, explosives, and hazardous chemicals. There are also other sectors of the economy that are prohibited from receiving ANY form of FDI, which include atomic energy, railway transport, ammunition and defense equipment, and mineral oils. However, most of the sectors fall under the “automatic route” for FDI, which basically implies that FDI can take place without the approval of the central government.

Corporate Strategy and Foreign Direct Investment in Developing Countries Such as India. (2017, Mar 08). Retrieved from https://studymoose.com/corporate-strategy-and-foreign-direct-investment-in-developing-countries-such-as-india-essay 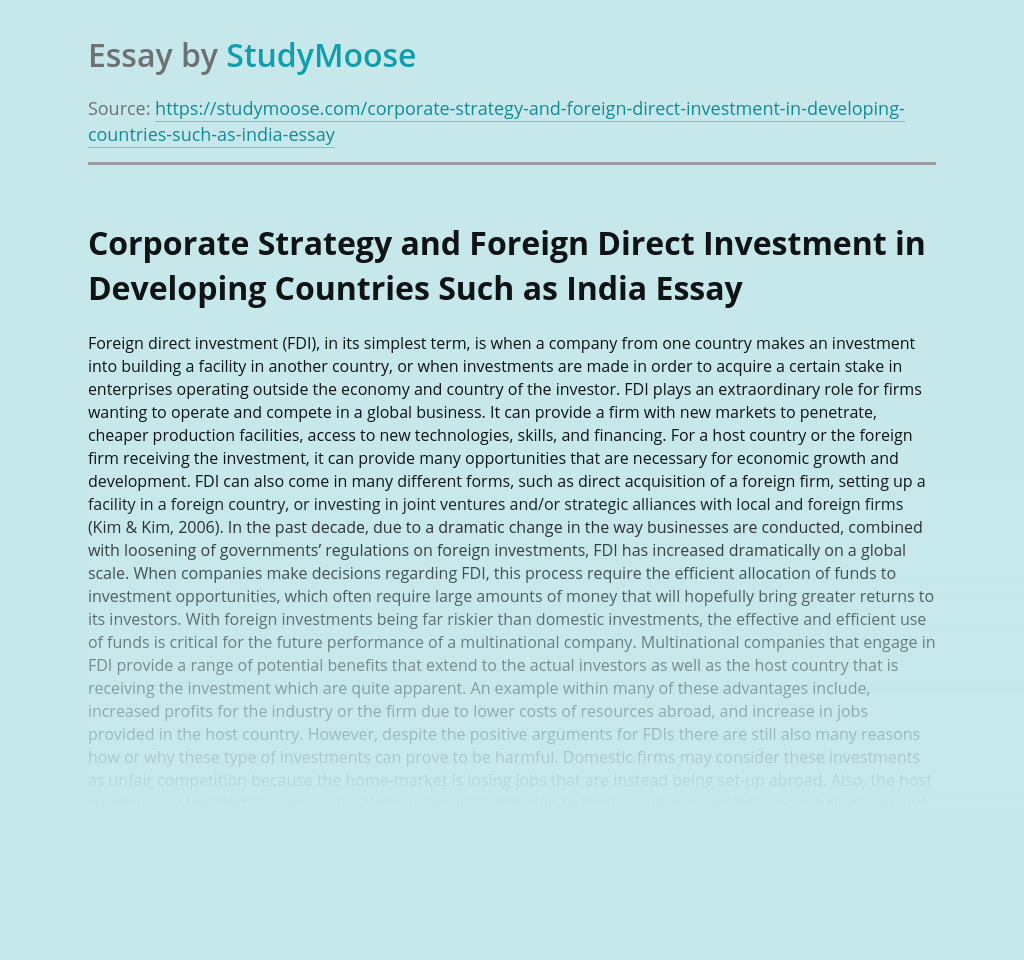 Turn in your highest-quality paper
Get a qualified writer to help you with
“ Corporate Strategy and Foreign Direct Investment in Developing Countries Such as India ”
Get high-quality paper
Helping students since 2015
Stay Safe, Stay Original