According to Vockell (1991), “Corporal punishment is the infliction of physical pain, contingent upon the occurrence of a misbehavior” (p. 278). It is a very controversial topic that is raised amongst educators across the nation.

Sometimes all children need is a little spanking to set them straight, help them see the errors of their ways, but, how would you know when you’re crossed the line from disciplining the child to committing child abuse. According to an article by Clark (2004):

363). Some people who support corporal punishment can see only the positive effects of these advantages. Out of these six advantages and for the purpose of this essay, we will be focusing on five of the advantages. The first advantage of corporal punishment is that “it is cheap and easy to administer.” This simply means that, it will cost less to spank a child instead of a long period of imprisonment and if one does not care about the “niceties” about hitting a child, it can be easily administered. The second advantage that was stated by Wilson is that it is an “effective deterrent.” Educators believe that corporal punishment is the only language children understand because it is perceived as unpleasant. This may sound like a disadvantage, but, punishment by its own definition involves unpleasant stimulations. Children will likely keep to the rules govern by the institution because they would fear the physical pain and humiliation.

The third advantage stated by Wilson is “effective reform,” this is the disciplining or reforming of a wrongdoer for misbehavior. As with effective deterrent, effective reform, also uses fear of physical pain and humiliation for attitudes or behaviour deemed unacceptable, to help improve or mend one’s ways. Another one of Wilson’s advantages states that “it is fair for all, since all people are similar in their dislike of pain” (Clark, 2004, p. 367). The recipients of physical pain knows how much it hurts to be spanked, paddled, canned, flogged or smacked, so they would try to stay clear of the obvious consequence. The final advantage states that there is “no permanent damage: when using corporal punishment. The recipients will learn self discipline when being administer corporal punishment as long as you follow the guidelines used in the institutions. These guidelines are put in place to help educators be responsible when disciplining a child using corporal punishment.

According to Vockell (1991), a solid finding from child-rearing research states that, children who are spanked more often than others are more likely to hit other children and act out aggressively while growing up. Parents and teachers need to reason with children to make them better understand that there are consequences to their actions. The children should know that it hurts the adults more than its hurts them to be spanked. And, by explaining this to the children, they would not grow up solving their problems by hitting people that annoy them. Another disadvantage is that corporal punishment may inflict real injury to the child that can be related to child abuse. Teachers can sometimes take out there anger and frustration on children in the name of corporal punishment, leaving them with broken bones, torn ligaments, whiplash injury, blindness and in some cases death, just to name a few.

According to Benatar (2001), “punishing a wrongdoer by inflicting physical pain sends the message that violence is an appropriate way to settle differences or to respond to problems. In conclusion, the arguments for corporal punishment might be practical and the only way for a wrongdoer to learn discipline and respect, but, at the end of the day, according to Europe (2007), “hitting people is wrong and children are people too” (5 p.). The effects on the children when using corporal punishment can be most damaging to their physical and emotional self. Even with school systems guidelines, teachers still commit child abuse in the name of corporal punishment. 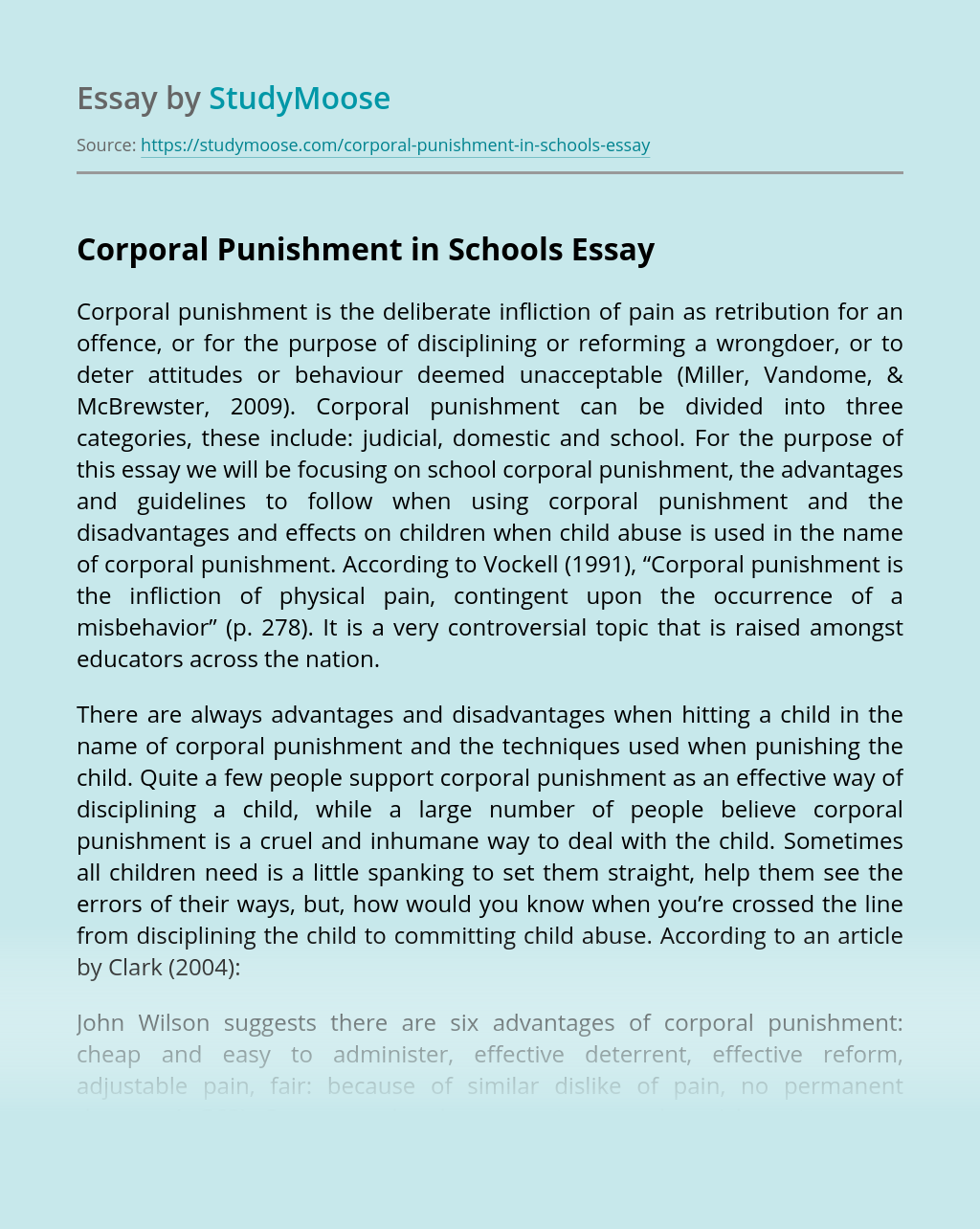 Don’t waste time
Get a verified expert to help you with Corporal Punishment in Schools
Hire verified expert
$35.80 for a 2-page paper
Stay Safe, Stay Original