Corporal punishment in regards to spanking has been used for hundreds of years in educational systems and in house holds and is still legal in all fifty states for parents to use in there household because it is an effective way to punish a child for wrong behavior. Even though in the last couple of decades this topic has been very controversial, many countries and educational systems have decided to outlawed corporal punishment because of the belief that it has created more and more violent behavior in children.

But, there is still no direct link to spanking causing children to have more violent behavior. However, if youth violence and dysfunction is increasing at the same time that corporal punishment is decreasing, we should be open enough to consider whether the two trends are related. Maybe there is no connection. But maybe lawmakers and child welfare workers should pay more attention to the research suggesting that physical discipline can be helpful in certain contexts (Larzelere,2005).

But corporal punishment is being apposed because other studies say it promotes more anger and aggression in juveniles, but places where it has been totally outlawed have shown different results.

For instance, after Sweden outlawed spanking, violent behavior did not decrease. Instead, there has been substantially more violence in Sweden than ever before– violence by children, violence by parents, and violence by society in general (Grusec, 1994). That being said, there is no direct link to corporal punishment being the cause of violence increase because this shows it did just the opposite. But research does show that it could be linked to something else, journalist Patricia Hersch tells of the ‘deluge of adolescent dysfunction sweeping the nation, manifesting itself in everything from drugs, sex, and underachievement to depression, suicide, and crime’; and it is being seen in younger and younger children. About 20% of kids now ‘have some sort of developmental, learning, or behavioral disorder.’ And as the Carnegie Council on Adolescent Development warns, ‘substantial numbers of American youth are at risk of reaching adulthood unable to meet adequately the requirements of the workplace, the commitments of relationships in families and with friends, and the responsibilities of participation in a democratic society.’(Hersch, 1998) And a lot of this is being caused by the lack of parenthood and how parents are raising their kids now days with substantially fewer parents staying home with their kids and we have become addicted to TV, movies, and videogames (Rosemond, 1989). Parents don’t have to attend to their kids as much because they just put a T.V. or some kind of videogame system in front of them to keep them occupied. Thus, giving the kids less interaction with other people and their parents, which can lead to bad relationships and also antisocial which leads to aggression as well. So we see all these things that easily effect our children and their behavior but people still try to link all of it back to corporal punishment when we should look at the big picture.

A common misunderstanding is how to use corporal punishment correctly, and the primary goal most parents have in administering corporal punishment is to stop children from misbehaving immediately (Gershoff, 2002) and is indeed a good method when used correctly. When a parent is using corporal punishment out of anger, frustration, or aggression, the child will learn that same action you apply on them. Therefore, the punishment can be classified as abuse to an extent and when pain is being forced on a child out of your own aggression and anger they learn those same attributes and those later on cause behavioral problems down the road. But when used just to stop a specific behavior with out trying to inflict pain on the child is when it is most effective, and yes spanking is a primitive discipline method. But a child’s mind is also primitive. As researchers like Dr. Jean Piaget of the University of Geneva have popularized, kids learn from the tangible to the intangible—from the concrete to the abstract. It is during the tangible, concrete stages when physical discipline seems to be the most helpful (Fuller, 2010). Thus, when using corporal punishment correctly and not abusively, the child understands immediately at a younger age. It is just like a dog, you need to train them at a very young age for the training to be most effective. Same thing goes for children because at a young age is when it becomes concrete, and just like dogs again, and when they start getting older it’s harder to get children to obey, and you cant teach a dog new tricks.

But statistics from Sears, Maccoby, and Levin (1957) show that they found that 99% of the children they studied experienced CP at least occasionally. If that’s true and corporal punishment causes aggression, promotes violent activities, and learning disabilities like people say then why doesn’t everyone have aggression, behavior problems, and learning disabilities? They don’t because spanking is to be better at controlling aggression than mental punishments like timeout, reasoning, scolding, “non-contact” punishment, privilege removal, love withdrawal, or diverting. Also showing that calm and controlled spanking, and spanking in response to defiance, is uniformly more beneficial than other punishments. (Larzelere,2005)

Growing up in a household where corporal punishment was definitely used by my parents, I feel my experience has had a huge impact on me because it has honestly helped me now more than anything. I say that because at a young age I learned fast what was right and wrong and have always been able to pick up onto things fast, and as I grew up I might have had some family problems and what not but I feel like me being disciplined at such a young age, it has kept with me all along. And I’m not just disciplined because I think I will be punished or something, but I have learned to be more, I’ve learned to be self-disciplined, and being disciplined has helped me in school, sports, living life on a daily basis, and my future. And that is another reason I believe corporal punishment is effective; it teaches discipline at such a young age, and with discipline comes responsibility, and these two traits are key for healthy lifestyle not just at a young age but through your whole life. Because no matter how old you are their will always be a punishment for your disobedience, whether it’s disobeying your parents or it’s disobeying a police officer, either way your going to have to disciplined enough to take responsibility for your actions. And if your making bad decisions or choices then you’ll probably have a worse punishment whether it’s a spanking or you go to prison. Punishments just get worse as we get older so might as well be disciplined now then end up in jail.

In conclusion, I see corporal punishment as a very effective way for children to learn not to disobey your parents but to also just be obedient in general. Even though some researchers say it has evidence leading to violent behaviors and aggression, their research seems to be inadequate when it comes to the results and observations of research. Research trying to support the outlaw of corporal punishment even says the evidence presented is not strong enough to permit a conclusion that it has been proven that smacking causes long term adverse effects on children (Larzelere,2005). Proving my point that corporal punishment is not a direct link to issues down the line, and I would like to reinforce that corporal punishment is an effective way of punishment if used for the right reason and depending on the context of the behavior, and that it has personally directed me and influenced me in more of a positive way. 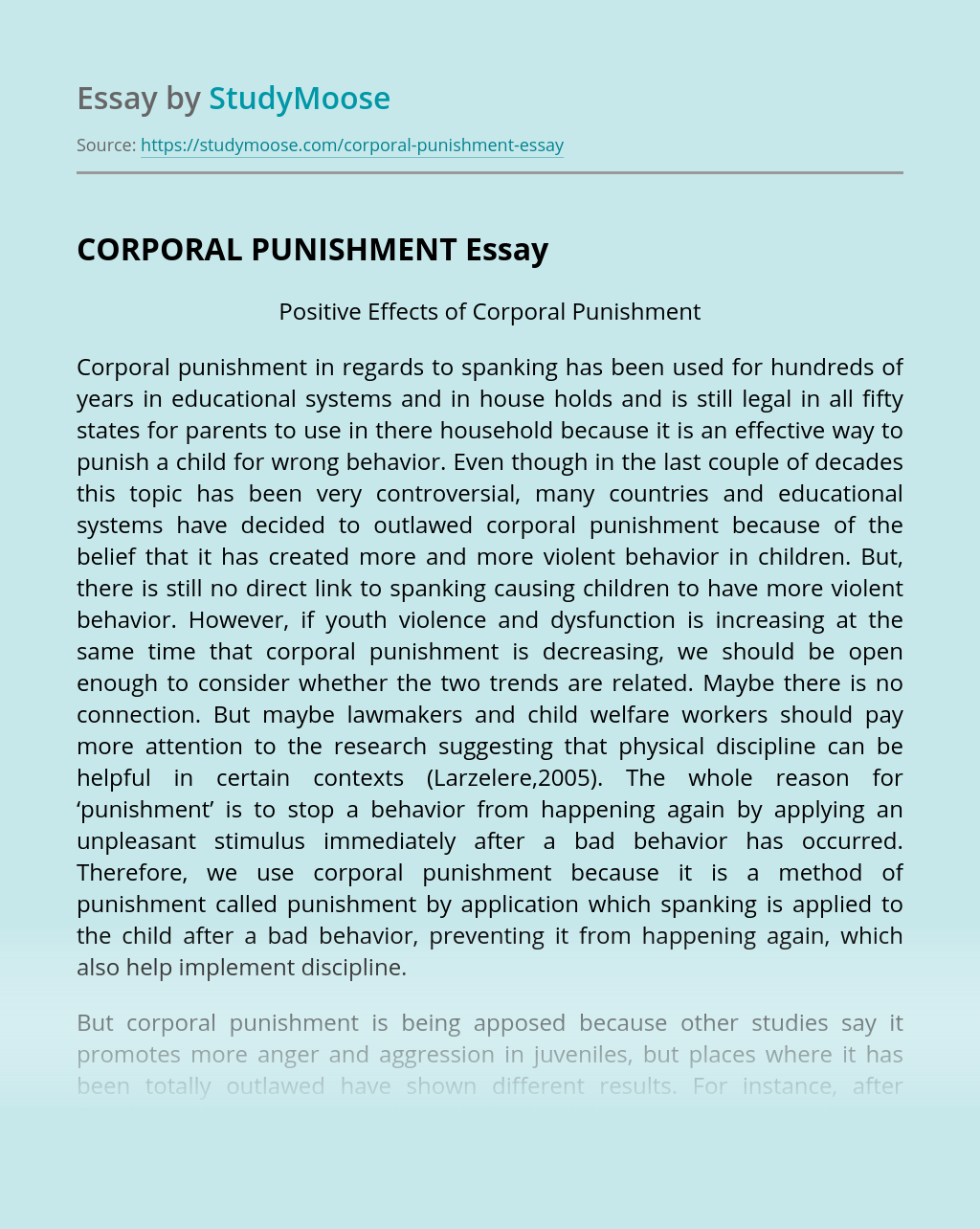