Tick, tick, tick, the heart ticks on. The Tell-Tale Heart is another spooky Gothic Horror story written in the 19th century by Edgar Allen Poe. Written entirely in first person, we follow the account of a young man driven to insanity by his mad actions. The person we hear the tale from tells us of his emotions and his feelings along the way. The young man lives with an older man who has never harmed him or never done anything wrong to him, but he decides to kill the older man.

Don't use plagiarized sources. Get your custom essay on
“ Conventions of the Gothic Horror – The Tell-Tale Heart by Edgar Allen Poe ”
Get custom paper
NEW! smart matching with writer

The old man’s eye drives him to this terrible deed as it looks like a ‘vulture’s eye’ and makes his blood run cold every time it sets upon him. The young man slowly but surely progresses into a state of madness and plots the murder of the old man by spying upon him sleeping at midnight every night.

We come to the night of the murder, and the young man is almost caught spying on him as the old man wakes from his sleep terrified, the time comes and the young man leaps into the room, throws the man to the floor and pulls the bed over him.

He dies. Chopping the body into pieces and carefully hiding them under the floor boards the police call round about a scream they were informed of, the man is not afraid, but as he sits there chatting away to them calmly a ticking fills his ears and no matter what he tries it gets worse and worse until he finally goes mad and confesses to the police of his crime.

We define different stories by genres, how we find out what genre the book fits in is by determining if the story has the correct conventions within it. Within the Tell-Tale Heart we are frequently shown conventions of the Gothic Horror genre, reversal of common norms is one convention shown to us:

“He had the eye of a vulture…”

Abandoned isolated setting is another convention in the Gothic Horror genre and is shown in the Tell-Tale Heart:

“Amid the dreadful silence of that old house”

An abandoned setting is frequently used as a setting in the Gothic Horror genre as it easy to use this setting to create an atmosphere of danger, fear and concern. The Victorians are reflected in this convention as they were feeling abandoned and isolated after their beliefs and religion had been purposely ripped to shreds by science proving them wrong.

Another convention is high emotion:

We see that the narrator here is very nervous showing us his high emotions within the story and giving an atmosphere of fear. As it is told in first person we, the readers, are affected by the nervousness of the main character and in the story it creates an atmosphere of fear, nervousness and anxiousness. The Victorians were very nervous at the time of the crisis and were probably in a state of high emotion.

Sense of mystery and suspense is yet another convention found within the Gothic Horror genre and the Tell-Tale Heart:

“… a very, very little crevice in the lantern. So I opened it — you cannot imagine how stealthily, stealthily…”

Mystery and suspense is a convention that increases the Gothic Horror genre intensely as it builds up the emotions of the characters and leaves the readers wanting to read on to find out what happens, the atmosphere created by this convention is an agonizing heightened sense of anticipation. The Victorians would have been in suspense and most of it would have been mystery as well as they were waiting for some sign of their beliefs to be confirmed as still true.

The use of darkness and gloom in the Tell-Tale Heart is shown often too:

“…black as pitch with thick darkness…”

Darkness and gloom creates an atmosphere of derangement and confusion as you feel something could jump out at you anytime. To the Victorians this would have scared them a lot as their loneliness and the darkness surrounding them could mask anything hiding and could scare them even more.

“…It is the beating of his hideous heart!”

This quotation shows us the convention of supernatural occurrences, we get from this quote that the narrator can hear the beating of his heart even though he is dead already. The atmosphere here is of fear and terror as the thought of a dead mans heart still beating is very scary and could drive even the sanest person into madness.

For my last convention it will be dangerous omens:

“All in vain; because Death, in approaching him had stalked him with his black shadow before him…”

From this quotation we can feel a sense of someone being hunted or stalked, in this case it would be the man being hunted down by death and taken from the world. Atmospherically it would create fear and paranoia, as the feeling of getting pursued by an unknown person or being would be chilling and creepy. The Victorians could be represented as the people being stalked and science would be the stalker or hunter, as they were pursuing religion of the people and destroying it with their logical theories.

Conventions of the Gothic Horror - The Tell-Tale Heart by Edgar Allen Poe. (2017, Oct 15). Retrieved from https://studymoose.com/conventions-of-the-gothic-horror-the-tell-tale-heart-by-edgar-allen-poe-essay 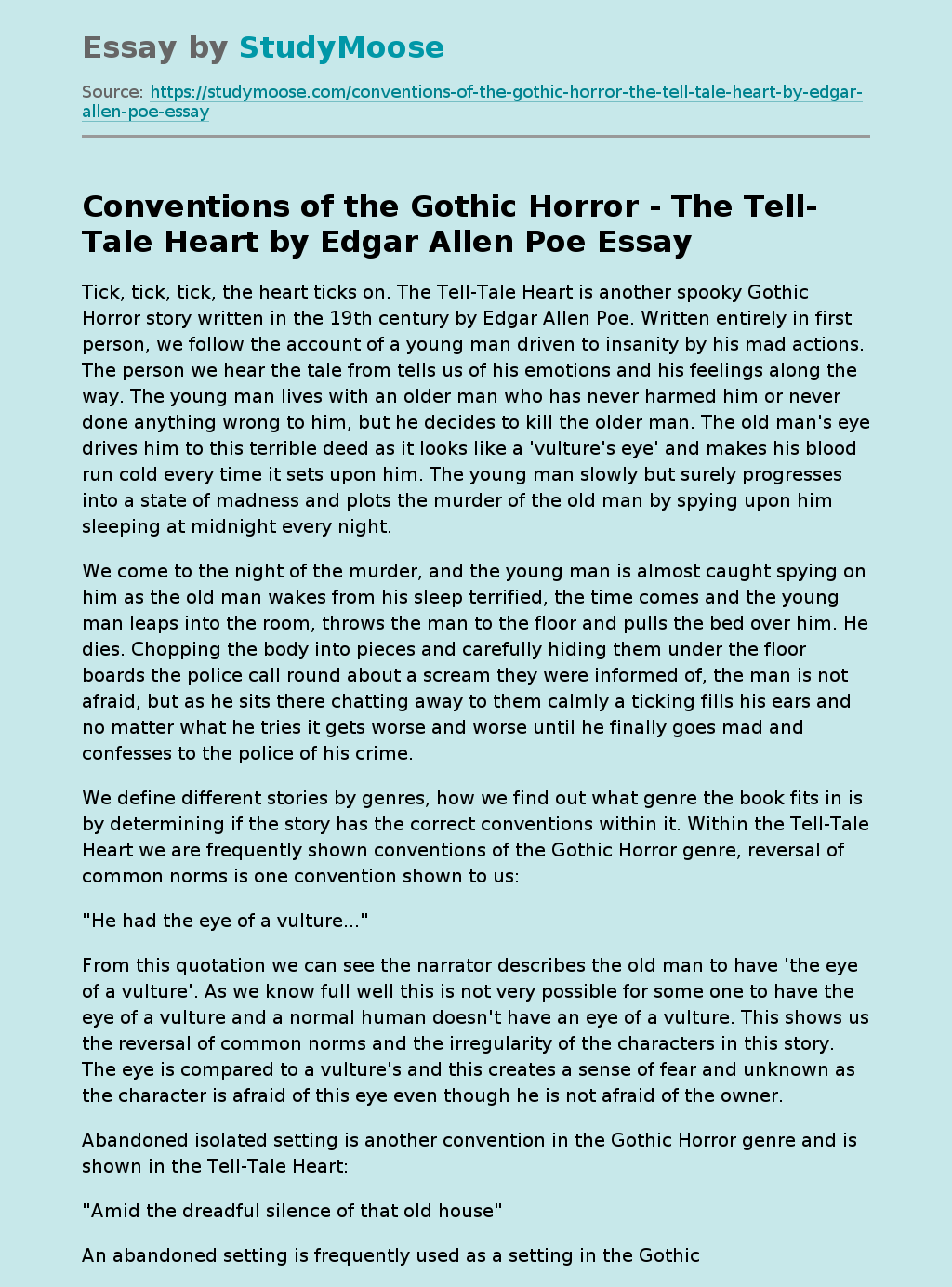