Organic farming had not played a role in the market in the previous years, yet today it is common in grocery stores around the country. Organic farming refers to the way farmers grow and process agricultural products, such as fruits, vegetables, grains, dairy products and meat. Organic farming is also constantly referred to as healthy, smart, beneficial, and ecofriendly but these are words used in advertisement ploys ran by large organic corporations. For centuries organic farming had been practiced, however, conventional technology has allowed us to further our reaches.

Conventional Synthetic fertilizers along with pesticides, herbicides and fungicides are all in the lime light today for the job they’ve been performing for years, they’ve allowed us to grow more and faster for our ever growing population. In studying conventional versus organic farming we find out which method is the most efficient, by analyzing modern marketing ploys, yield rates and agricultural sprays. Advertisements have become a way of life for the average person.

We are exposed to advertising in in every way imaginable.

Corporations want to get their point across that their product is superior to everyone else’s. Organic produce and meats are no different. Christie Wilcox, is a science writer and PhD student at the University of Hawaii, as well as an award-winning blogger and publisher of traditional and peer-reviewed writings and scientific research, says in one of her blogs “In the past year or two, certified organic sales have jumped to about $52 billion worldwide despite the fact that organic foods cost up to three times as much as those produced by conventional methods.

(Wilcox). People are paying more for what they believe is a better and healthier product. Organic is marketed at a price increase for paper work and stamps on the product that reads certified organic. Of course there are many requirements before these stamps are allowed to be placed on the product. What exactly constitutes a certified organic product, and is it difficult to meet those standards? There are several stages to reaching Organic level.

One of the many criteria is to avoid synthetic fertilizers along with conventional pesticides; in livestock it is to avoid hormone injections and avoid cross breading from conventional and organic cows. In produce the trick is to use certified organic pesticides and fertilizers. This is where many consumers are confused. Organic farms are allowed to use fertilizers and pesticides as long as they’re on the U. S. D. A Standard list. This list continues to grow having a dramatic effect on organic credibility.

Read about positive effects of the green revolution

One of the most interesting things is that “shockingly, the actual volume usage of pesticides on organic farms is not recorded by the government. ”(Wilcox). This means organic farms are allowed to spray their organic fertilizers and pesticides with the quantity they’d like without ever having to prove it. Pesticides, they’ve been around for years, why does everyone make such a big deal about them? According to the EPA (Environmental protection Agency) it “ensures that each registered pesticide continues to meet the highest standards of safety to protect human health and the environment.

The Agency has several programs to ensure the review of registered pesticides, including reregistration, tolerance reassessment, registration review, and special review. ” (EPA). With such strict regulations and standards in place what is to fret? There are many organizations and agencies to protect its citizens. If there were substances which damaged your health in pesticides they would have been banned by now. These pesticide products pass constant scrutiny and are expected to meet the highest of standards.

We trust conventionally grown produce for our children in our schools, why not eat it ourselves at home? When you buy conventional you are paying for what you get, there is no need for over dramatization or blurring of the facts. These days for conventional produce, every carton, bag, or individual commodity comes with a label sticker where you can scan and track the product to the farm it was harvested from and know the exact detail of the field. This wouldn’t always apply to organic as they are not required by law to record the amount of organic pesticide they spray on their fields.

What does conventional farming offer that organic just can’t compete with? To put it short what doesn’t it offer? In all farming operations one of the main concentrations is yields. A yield in layman terms is the amount of produce your field will render at the end of its harvest. Yields define your field and crop from how profitable or how fertile it may be. According to Matthew Knight, writer of dozens of reach articles for CNN says “New research looks set to refuel the debate revealing yields from organic farming to be, on average, 25% lower than conventionally-farmed produce. (Knight). That is a substantial amount less of produce. To continue feeding such a massive population we need to farm in massive amounts. Even with organic farms on the rise it would take hundreds if not thousands or more acreage to compete, or keep stable with conventional farming. That just isn’t an option with today’s populations which is estimated to be at around 7 billion individuals, and is estimated to jump to approximately 8 billion within a lifetime. It seems like that 25% of more produce starts to show its value, the same principle applies to organic livestock.

According to Joanna Pearlstein, Senior editor of research at Wired Magazine says “Dairy cows raised on organic feed aren’t pumped full of hormones. That means they produce less milk per Holstein — about 8 percent less than conventionally raised cattle. ”(Pearlstein). Why is going green not always what is best for the planet? Even though organic is praised for its sustainable practices, it in some cases it can be damaging to the environment rather than helping it. As Brendan I.

Koerner, contributing editor at Wired, columnist for Gizmodo and writer of Now the Hell Will Start states “methane has become far more prevalent in the Earth’s atmosphere since the dawn of the Industrial Revolution. ”(Koerner). With an estimated 100 million cattle in the US a major contributor of the methane gases is cows, and with “organically raised cow[s] [putting] out 16 percent more greenhouse gases than its counterpart” it is easy to understand why. The more organically raised cows this nation begins to produce can have a dramatic effect on our already controversial green house and global warming crisis.

So organic must taste better for the price increase, right? You’d be surprised to find out that several studies have proven no absolute difference in taste of conventional or organic products, “In the same poll where 95% of UK organic consumers said they buy organic to avoid pesticides, over two-thirds of respondents said organic produce and meats taste better than non-organic ones. But when researchers had people put their mouths to the test, they found that people couldn’t tell the difference between the two in blind taste tests. (Wilcox). These statistics demonstrate the strength of marketing and promoting organic products to be superior to conventional ones. The nutrients also do not seem to differ and are relatively the same in many nutrients test such the ones which “contained a total of 3558 comparisons of content of nutrients and other substances in organically and conventionally produced foods. They found absolutely no evidence for any differences in content of over 15 different nutrients including vitamin C, ?-carotene, and calcium. ”(Wilcox).

Both conventional and organic at this point are virtually identical to one another. The differences are minimal at the best. If the consumer believes that organic taste better or is healthier they have fallen for the trap laid to them by the organic corporations of the world. Joseph D. Rosen, emeritus professor of food toxicology at Rutgers, emphasizes it more clearly when he says, “Any consumers who buy organic food because they believe that it contains more healthful nutrients than conventional food are wasting their money,” (Rosen) he writes in a comprehensive review of organic nutritional claims.

It is apparent then that these bold marketing ploys by organic corporations have effectively worked, but are not necessarily true. As a society we expect the advertising of products to be published in truth and as a result of this, we have learnt to trust big-time corporations. But from analyzing the tactics that these corporations have used in the case of organic farming i. e. modern marketing ploys, agricultural sprays, taste of products and yield rates it has become apparent that what we have been told is not entirely true.

The facts lie in the basic truth that is conventional farming. In all instances, organic farming is shown to be a figment of a corporal money-making design that, unfortunately, society has fallen to. While there are small truths to what these companies tell us, like the certified organic fertilizers example, they are always hesitant to tell us the bigger story. This analysis is why I believe that conventional farming is the more trustworthy and efficient way to farm, and that if society would adhere to this, organic farming would not be such a staple in our supermarkets today. 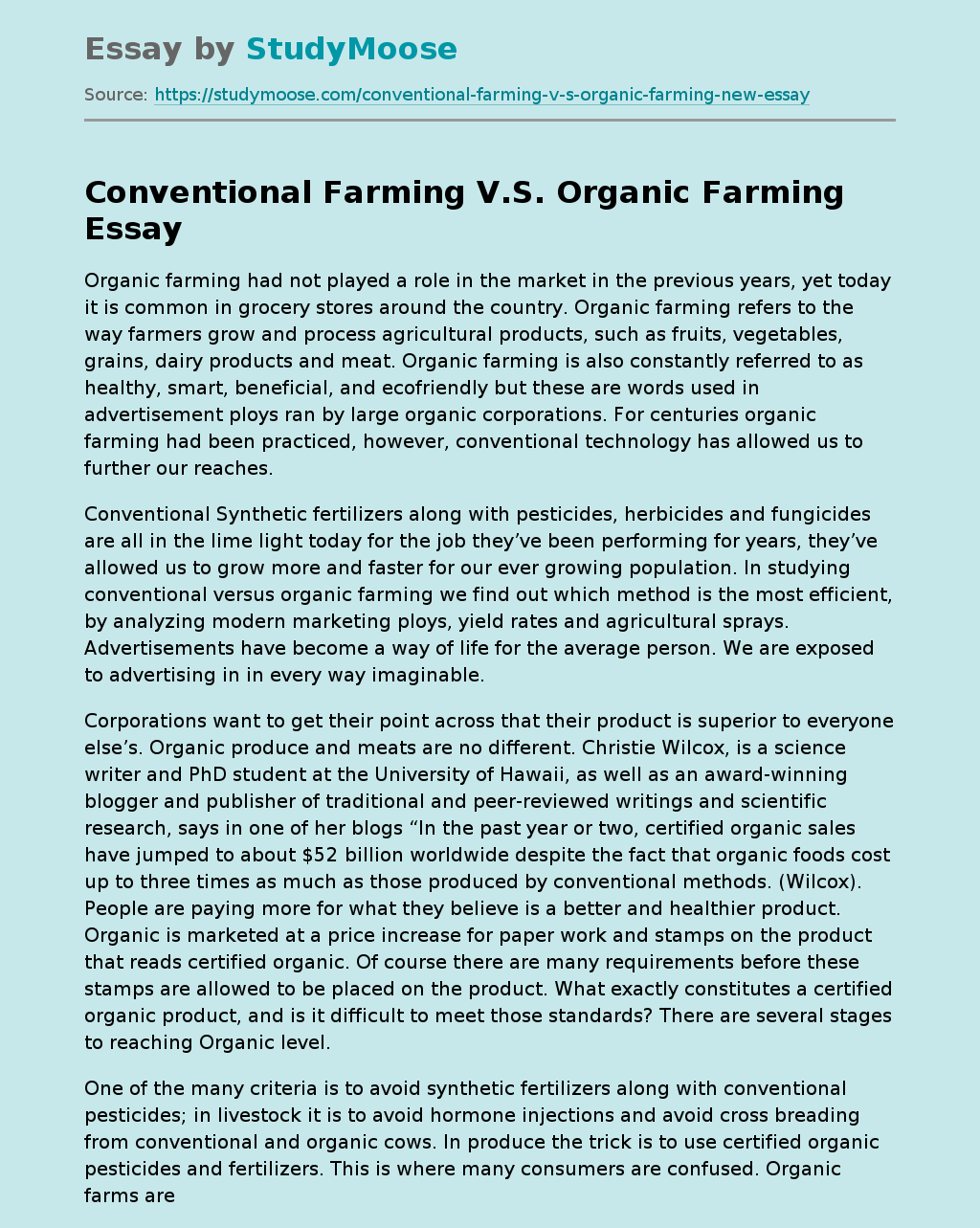