Either slavery or the nation had to perish. In history classes now-a-days we are told, Abraham Lincoln rose to the presidency and took the needed steps to end the intolerable situation of segregation by making sure that the South did not withdraw from the Union and remain a slave-holding society. Does he really deserve all this credit? This used to seem a plausible story to me. Most people are quite satisfied with the ending, hoping that, in time, effects of slavery and segregation would vanish and the country would emerge supportive of individual rights for all.

Don't use plagiarized sources. Get your custom essay on
“ Controversional Abraham Lincoln ”
Get custom paper
NEW! smart matching with writer

Yet, there were some difficulties with the story, (after being exposed to Leon Litwack and Fredrick Douglas’ works). Abraham Lincoln had moral objections to the slave system, which is indicated in the Gettysburg Address, yet his duty to the union became his primary and only objective, and his actions were based solely on the mentality of the majority.

Instead of starting from slavery the conflict started from the difference in economic policies of the Northern and Southern states, some of them related to slavery but others were independent of it.

Slavery, however, had been planted in both sections of the Union and had proved unprofitable in the North and profitable in the South. The South sought to expand the influence of the slavery; the North sought to contract it. For Lincoln his top priority was dealing with preserving the Union. There is no doubt that Abraham Lincoln despised segregation and desired equality. However Lincoln refused to make a bad situation, with the Union, worse by any ill-judged or ill-timed effort to make freedom for all men reign, as he spoke of in the Gettysburg Address, unless it was necessary.

His fear that any public abolitionist moves might drive slave states into confederacy caused him to refrain from helping the slaves willingly.

“…conceived in liberty and dedicated to the proposition that all men are created equal.” Even though the Gettysburg Address exhibits his desire for a democracy where freedom and equality reigned for all men, it doesn’t change his main political purpose, which was to do whatever necessary to preserve the Union, which in this case happens to be freeing the slaves. Abraham Lincoln didn’t so much-object to slavery as to some of the Northern states. In fact, Lincoln even agreed with the way many Southern slave-owners thought about blacks and whites.

True, in the end, he did emancipate some of the slaves, but if he had the opportunity of preserving the Union without freeing the slaves he would have. “My paramount object in this struggle is to save the Union, and it is not either to save or to destroy slavery. If I could save the Union without freeing any slave I would do it…” He acted solely upon the mindset of the majority, the whites, and acted the least on the issues of what he is “heroically” known for, the equality for all men. Lincoln’s emancipation of the slaves was a just move within his political-diplomatic strategy, and nothing more. It was most likely intended to satisfy some of the Europeans who had sympathized with the case of the Southern states. So in fear that England would side with the South, Lincoln declared slavery a heinous and intolerable act, and refused to agree to facilitate continuation.

Abraham Lincoln is almost as controversial a figure today as he was 136 years ago. His actions were the result of the benefit for the majority and the preservation of the Union. Emancipating the slaves was just an added extra for saving the Union. He had no interest in freeing the slaves. He clearly states that if he were elected he would attempt to abolish slavery. The south was defeated, slavery perished, the Nation lived, and Abraham Lincoln was wrongly labeled as a hero. 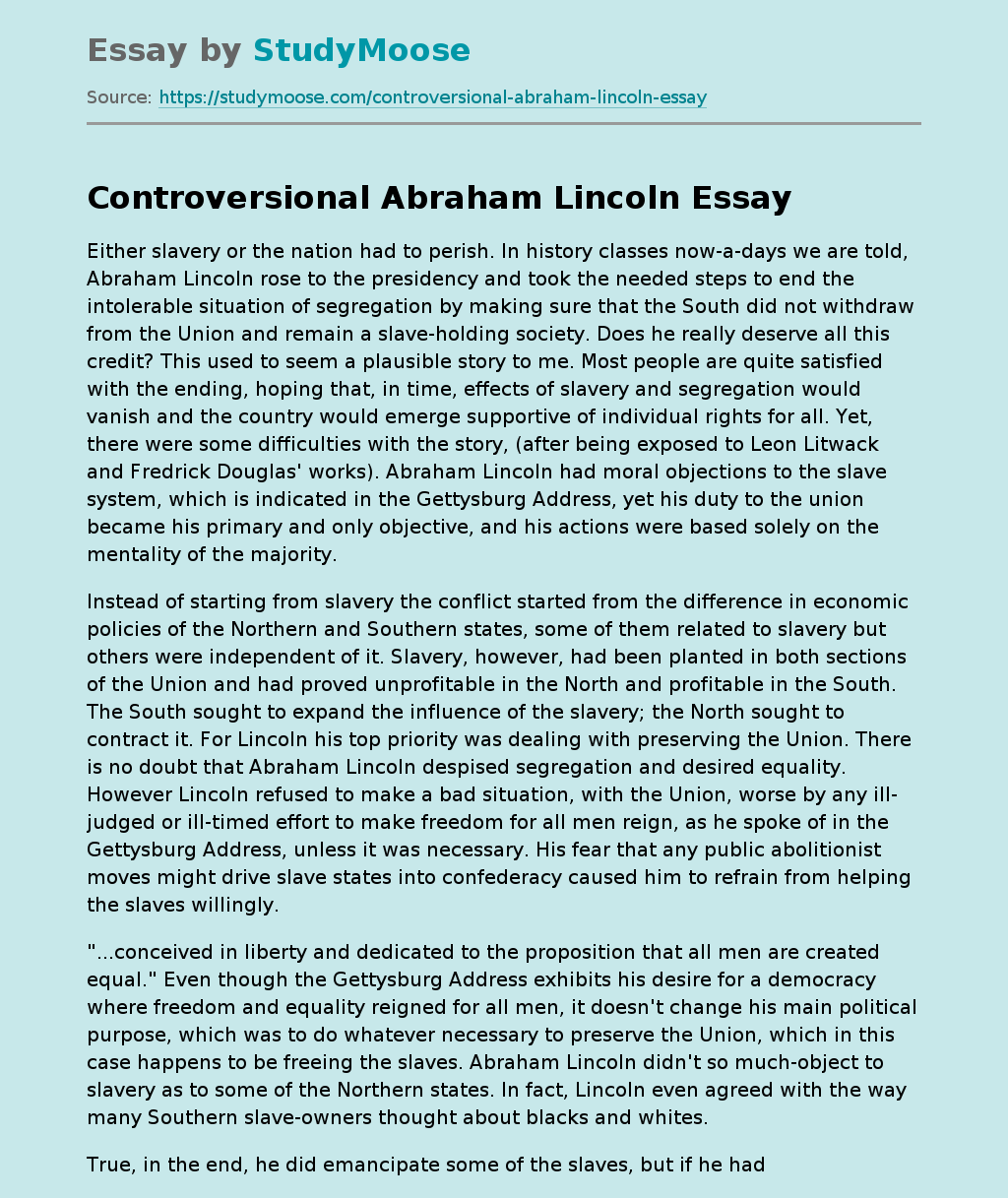