Bruce Dawe once said that, “we write out of a need to come to terms with some concern, or something “bugging” us.” From this statement, it is blatant that he expresses his emotions and morals through his poetry in attempt to share his views and concerns on contemporary issues of the world with the world, influencing readers to reconsider their values. The universal appeal of Bruce Dawes poems lie in the poet’s passion in speaking for those who have no means of speaking.

Don't use plagiarized sources. Get your custom essay on
“ Controversial Issue of Abortion The Wholley Innocent ”
Get custom paper
NEW! smart matching with writer

In “The Wholley Innocent”, which is written in the 1980’s, Dawe, challenges his readers through a wilful determination to terminate the pregnancy of a healthy foetus. Through the use of poetic techniques such as persona, vivid imagery, deliberate repetition, and onomatopoeia Dawe reaches the moral conscience of his readers to the wrongness of terminating life prematurely. “The Wholley Innocent”, through its use of poetic forms, effectively documents the universality regarding an extremely controversial issue that is abortion.

The title “The Wholly Innocent”, accurately reflects the subject matter, as the poem involves an aborted foetus who has done no wrong in this world, and is therefore “wholly innocent”. Sequentially, this positions the reader in believing that the unborn foetus, which has done no injustice to the world, should be given the chance to live. The foetus’s innocence is again reinstated in the line “Defenceless as a lamb.”, as lambs symbolise purity. This induces the reader to sympathise with the innocent foetus and thus, positions the reader to perceive abortion as immoral.

This also suggests that the innocent mustn’t suffer because somebody else somewhere, the adult, is guilty. On the whole troubled question of when life starts and what we should do about when it has started, Dawe recognises that there is one thing which most people will concede, the point that those who are waiting to be born are holy innocents, in the double sense of the word; of being wholly innocent because they don’t have any say in what happens to them. Dawe uses this to generate universal appeal as no one sympathises with the guilty but will however sympathise with the innocent and defenceless.

Through the use of the poetic technique of repetition, Dawe establishes that the unborn foetus has the right to see these basic components of nature that we usually take for granted. The repetition of “never” and “Nor” in the first two stanzas describes the fact that the foetus has missed out on numerous aspects of life due to being aborted. In these stanzas the use of repetition expresses the endless list of things that the foetus has lost as a result of never having encountered life. This manipulates the reader into believing that abortion is unethical as you are not providing someone with the opportunity to experience life.

Further underpinning the poem’s universal appeal is word choice where Dawe foregrounds the theme of having the right to life. The lines “Oh you within whose god-like power” “It lies to so decide,” establishes the fact that the mother of this foetus has no right to take away his/her life as she possesses little power in comparison to that of god’s. The word choice in the last stanza of the poem is also effective as it leaves the reader with a sense of guilt. The lines “Remember me the next time you”, “Rejoice at sun or star –“and “I would have loved to see them, too.” reveal that the foetus is only human and would have also enjoyed the things that other people take pleasure in. The final line of the poem also leaves anyone who has even undergone abortion feeling guilty. “I never got that far.” reinstates the act of depravity that has been committed further endorsing the concept of senseless life loss, a universal theme.

Dawe uses vivid imagery to emphasise the fact that abortion is profligate and unjust. The penetrating imagery of a womb that could become a tomb if abortion is carried out in “The Wholly Innocent” will unnerve any reader contemplating terminating a pregnancy. The lines in stanza five “For I was part of that doomed race” and “Whose death–cell was the womb,” reveal the fact that the unborn foetus is ashamed to feel a part of its race which evokes untold pity for his/her defenceless life that is trapped. The foetus also highlights that all he/she wants is to experience the simple things in life like to “rejoice at sun or star.” Most readers would agree that this is a universal right for all individuals to see these basic components of nature. In the line, “I never knew the sovereign touch of care.” this suggests that he/she never experiences parental love which in turn evokes untold feelings of pity and sympathy in the reader. A simile is also used in stanza three that he/she will die “anonymous as mud” if nobody protects him. The foetus also compares itself to a defenceless lamb with certainly evokes feeling of sympathy in the reader.

Overall, Bruce Dawes “The Wholly Innocent”, which is an extremely powerful poem, successfully establishes the fact that the mother of this foetus has no right to take away his/her life. This poem also establishes that there is absolutely no justice in killing a life and that the mother has no entitlement in doing so, as she possesses little power. With the aid of the poetic techniques of repetition, word choice, and imagery he arouses sympathy, carefully manipulating the audience to reflect upon his own views towards abortion. In this way, Dawe has created a poem that is not only uniquely Australian but presents issues of global concern which generates universal appeal. 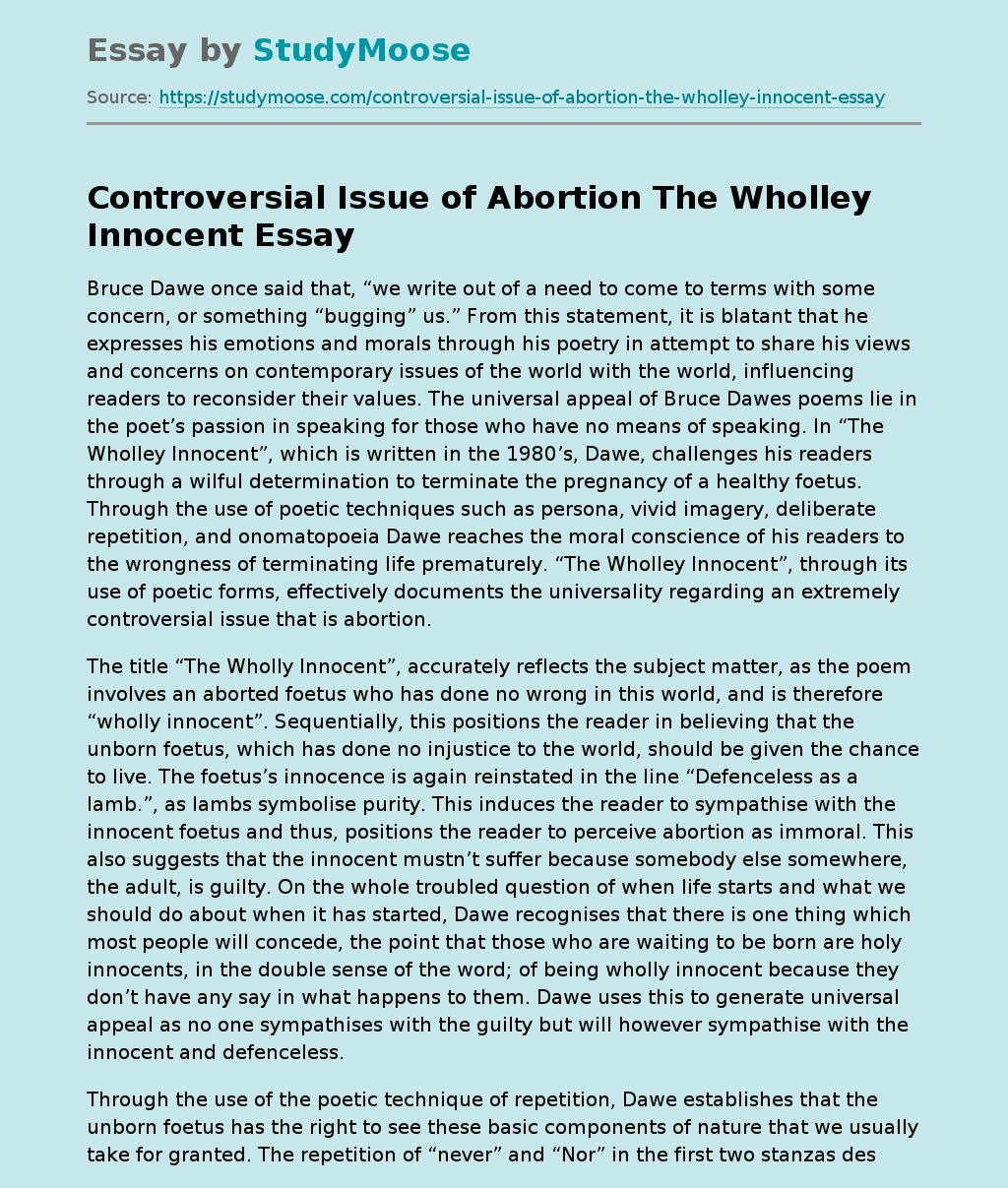