Are we a little too close minded? Authors love to explore controversial subjects and well everyone loves to read them too cause they are different. When it comes to India there are a lot of topics which may offend one community or the other. One may find it interesting the other may find it disturbing. This is because of the huge diversity we have. Everyone has different aspects to live life and problems arise one way or the other when both the parties don’t agree to one thing.

Don't use plagiarized sources. Get your custom essay on
“ Controversial Banned Books in India ”
Get custom paper
NEW! smart matching with writer

India and foreign authors love to take a dig at controversial topics and India has a lot of controversial topics. Many books are banned from India because of their non-acceptance by certain societies. I would like to discuss about the banned books and the reason behind their ban.

Rushdie’s fourth novel written in 1988 came into controversy for insulting Prophet Muhammad. The Muslims found it as blasphemous because of the satirical use of Islam.

The book also claims that Islam has too many rules. Many copies of his book were burned. A fatwa to kill was issued against him, the publishers and the editors by Iran’s Ayotollah Ruhollah Khomeini in 1989. Fatwa is a legal and religious order given by a Muslim leader. Bookstores were also banned because of this book. This book still remains banned in India and some other countries. Rushdie was forced into hiding because of the Fatwa, he also canceled Jaipur Literary fest due to this.

This book contains controversial opinions of Jaswant Singh. The post-partition period saw trauma among people. Who was responsible for the partition? In this book, Singh is sympathetic towards Jinnah and blames Pt. Jawahar Lal Nehru for the partition. It also had vicious remarks against Sardar Vallabhbhai Patel. The book was banned and also Singh was expelled from BJP headed by L.K. Advani in 2009. However the ban was lifted after a few days.

The Myth of the Holy Cow- Dwijendra Narayan Jha

Hindus consider cow as a holy animal and abstain from eating beef. This book published in 2001 has textual evidence from Vedic scriptures that Hindus ate beef and slaughtered cow before the 19th century. This was a controversial statement and the book was banned by the mainly by the Hindu community. Hyderabad Court also banned the book and he received many death threats after his findings.

The Polyester Prince: The Rise of Dhirubhai Ambani

This book is the only whose banning reason is not politics. The unofficial biography of the Ambanis got banned in 1988. It did not even got printed. The Ambanis took legal action as it was defamatory. They are the richest not for nothing.

An Area of Darkness: V.S. Naipaul

This book is a criticism of the India’s caste system which has left some communities in extreme poverty and sufferings. India is shown as helpless and hopeless country. The reviews by the Indians were not so very good and it was largely controversial because of the extreme remarks. 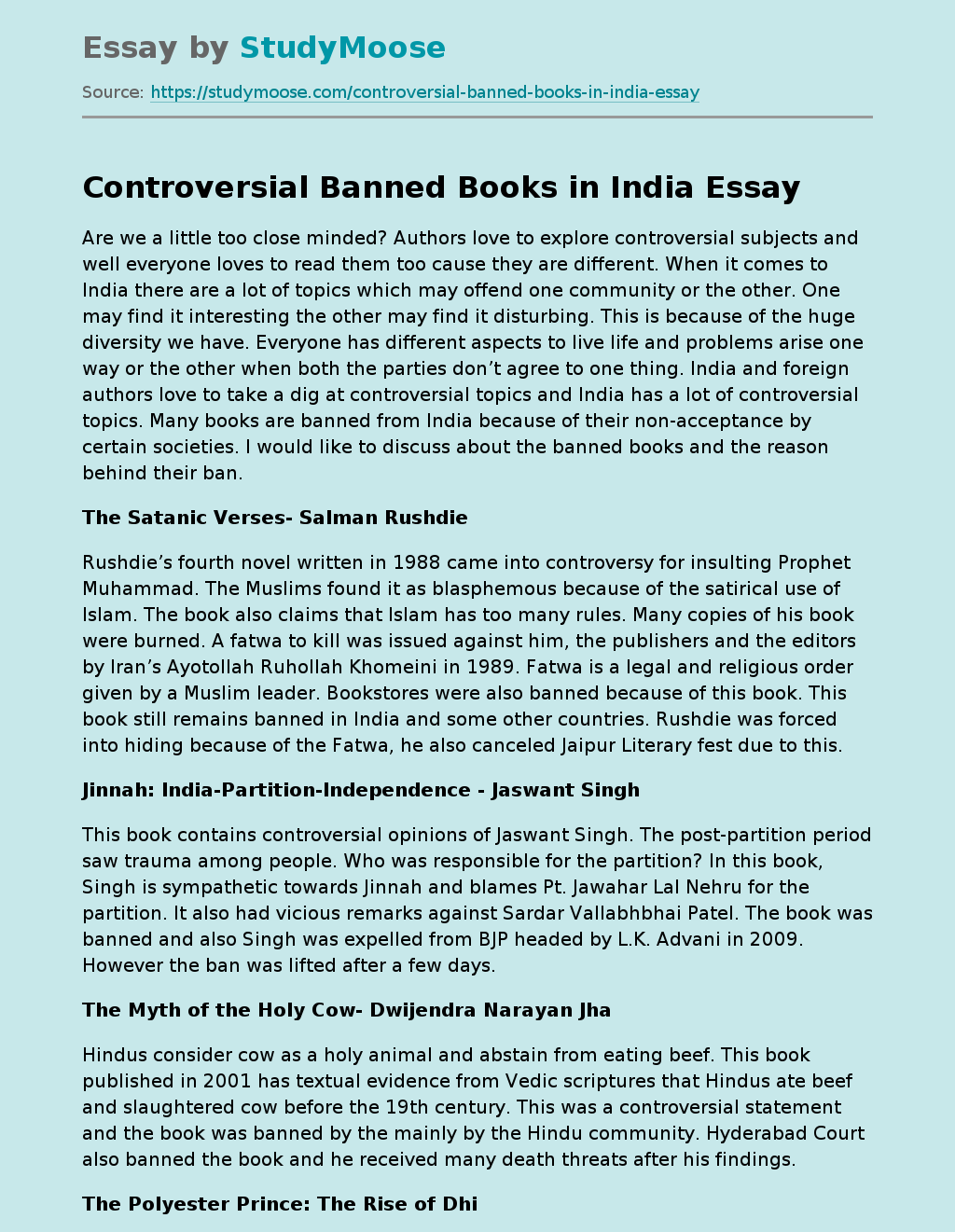