Don't use plagiarized sources.
Get Your Custom Essay on Contemporary Issue in Health and Social Care Just from $13,9/Page

UK citizens are very much concerned about their health and social care issues and they listen, understand, and take relative actions to apply this information for the effective and efficient health care sector (The Guardian. 2014). Use of pamphlets is one of the most effective ways to disseminate information. UK government and related ministry has also made it available through radios, televisions, and running campaigns which are educational (Minniti and Moren, 2010). For example

Before the invention of Facebook, any movement that had to be taken place faced great difficulty. But as Facebook grows and other mass media are getting concerned about the rights of them from the society, any nonviolent movement is taking place without such effort than previously had done (Mcclimens, et al, 2012). People are conscious about various contagious diseases and much more aware about their contribution to the society. They are also focused on their rights from the society. Their contribution to the society and the benefits they are deriving from the society are summed to take them to a balancing position or situation (AJOL, 2014). LO2 Understanding how issues of public concern related to health and social care are presented in the media 2.1 Ways in which media can be used to influence the attitudes and behavior of people in relation to health and social care issues Ravasi and Schultz(2006)

Statesas it is mentioned in the previous section, mass media and social media in UK and perhaps all around the world is dedicated to the health and social care of the people. People’s attitude and behavior has changed and has been upgrading with the help of mass media especially in case of health and social care issues. Mass media is one of the main catalysts in the development of the positive attitudes and behaviors of the people. People are now much more aware of the use of social care services. They use child care services; they use more residential nursing care; they use residential care facilities and many more others (The Guardian. 2014).

So, how people accept media information and, if accept, the degree of acceptance is a matter of great concern (Godden, 2014). People are very much concerned about the reliability and validity of the media information relating to the health and social care issues. Their dependence on the information is based on the transparency, honesty, and giving voice to the public. For example

In India, it is mandatory to make the life insurance at the very advent of the birth of a child as like in the United States of America. UK is also monitoring a positive change in the health and social care sector and issues. In the local environment, people are also becoming much more aware about the services that can be expected from the government. Social care sector is observing a boom in the economy and the government is now transferring its duty to the private sector for the social services. The government is taking the position of monitoring the health and social care service institutions (Cleland and Gareis, 2006). 3.4 Factors that have influenced on the development of different perspectives According to Minniti and Moren (2010) various social and economic factors lead to the changes in the different perspectives of the issues of health and social sector.

A survey is conducted by the NHS of UK with a question “Do you think that Britain’s health services are one of the best in the world?” 59% of the respondents replied positively whereas 33% disagree with the opinion and the remaining other said they don’t know (NHS. 2014). This example illustrates the national level attitude about the health and social care and it can be said that people are satisfied with what are being provided and the level of satisfaction is high. Health and social care sector is a sensitive sector as this sector is related to the life of the people. 4.2 Evaluation of the validity of public attitudes and behaviors in relation to a specific issue Public sometimes overact in different issues about health and social care. Their overreaction may lead to suspension of some good bills and at times which is catastrophic for the common people.

In case of some specific issues public attitudes and behavior must have to be evaluated and the validity of their action will have to be measured (NHS. 2014). In the previous example it is clear that people are much more convinced about what they are getting from the government and public. Still some others reacted negatively and others made no comments on the issue. It is overreaction about the issue of health and social care. Peoples normally have positive experiences of the services being offered by NHS. NHS also makes direct communication and has strong media coverage. For example

Mass media develops the public attitude toward the health and social care issues and an issue can be the “Satisfaction of the people services being offered by NHS” 26% people say that government has adopted right policies for the NHS whereas 44% says not. 54% people are satisfied with the national level services of NHS whereas 23% are not. 68% people are satisfied with the local NHS services (NHS. 2014). 4.3 Justification of the possible consequences of contemporary thinking for health and social care provision and services Csikai and Bass (2001)refers if people are not sophisticated enough and still remain in the Stone Age about the thinking of the health and social issues, these may lead to severe consequences. 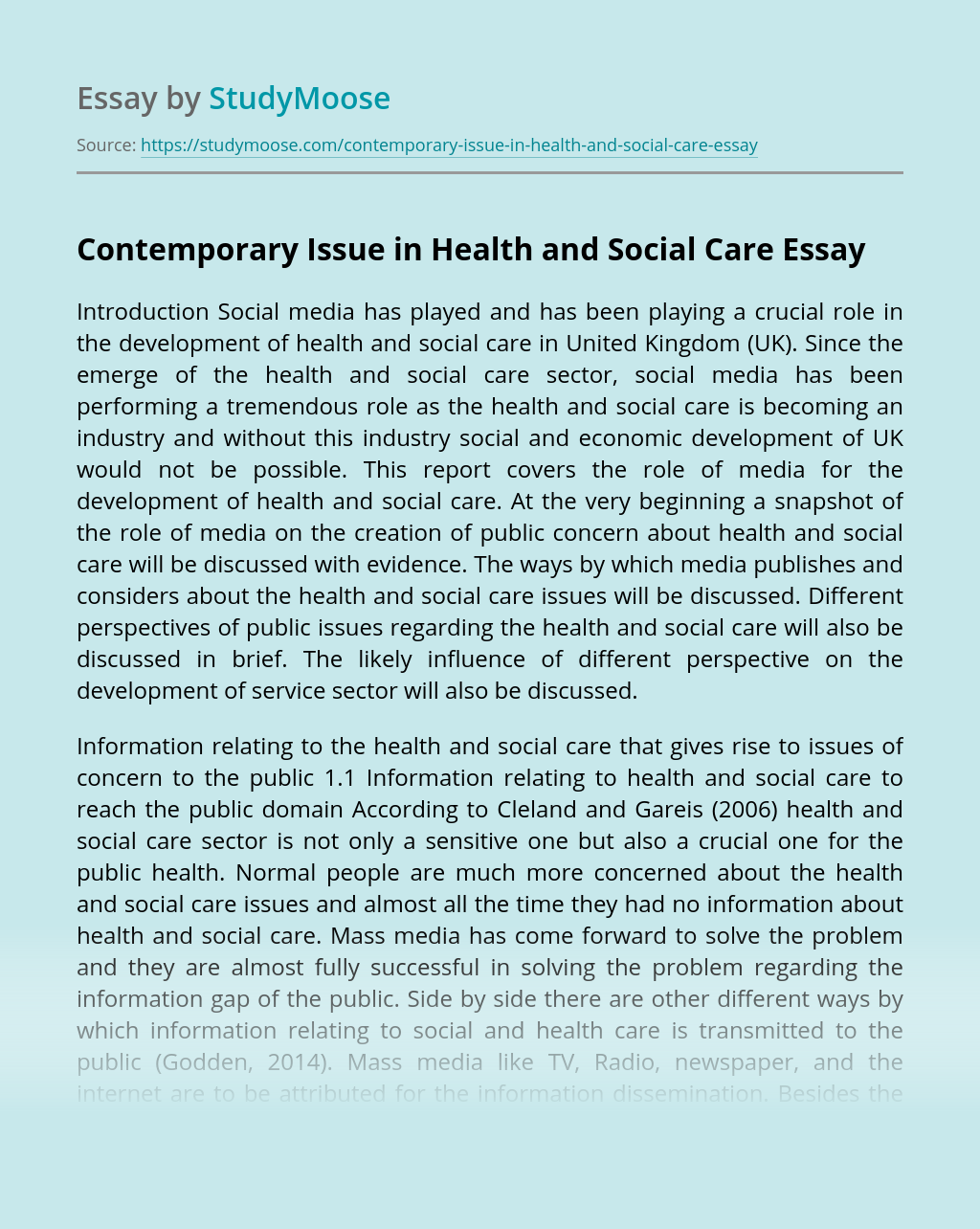 Rate this post Health care spending in the U.S. continues to soar to unsustainable levels. There are many strategies and views on ways to contain health care costs, while improving the efficiency and quality of health care. Hospital services, physician services, prescription drugs and technology/medical innovation and the aging population are areas that drive the...

Rate this post Sharp Healthcare offers groups for breastfeeding mothers, postpartum depression, grieving for loss of a child, obesity, eating disorders etc. Do the community members value health promotion measures? What is the evidence that they do or do not (e.g., involvement in education, fundraising events, etc.)? Fundraising events for local kids with Neuroblastoma (Pediatric)...

Rate this post How are the health care workforce and health care delivery affected by generational differences? Millions of generations have worked so hard to contribute to some of the challenges within the workforce. Every generation has inner deep values formulated by the era in which they were born and some life experiences. The work...

The Determinants of Health

Rate this post The determinants of health are economic and social conditions that affect people’s health status. These influence the living and working conditions that impacts people’s everyday living condition. Factors such as the place and the environment we live in, genetics, educational level or work status and income, as well as friends and family...