Consumer Culture plays a significant role in our everyday lives. The articles In Praise of Consumerism and Needing The Unnecessary; The Democratization of Luxury by James Twitchell show strong arguments in favour of consumer culture. Both articles focus on how important consumerism has become in the modern commercial world and how more people wealthy or middle class are buying luxury items to be accepted by others in society. People in today’s society who buy luxury items find it “arousal seeking” and it is believed that consumerism will soon be the new world culture.

Don't use plagiarized sources. Get your custom essay on
“ Consumer Culture in the Twenty First Century ”
Get custom paper
NEW! smart matching with writer

These two articles show similar views on consumerism and hold valid information in favour of consumer culture. Korten shows that the transition from an Empire to Earth Community would be alot easier without the increase in consumerism in the 21st century.

James Twitchell wrote an article In Praise of Consumerism about how consumerism is a significant part of everyday life. Commercialism is in practically everything that we encounter on a day to day basis.

It is in the water we swim in, the air we breathe, our sunlight and shade. In our society you can’t consume an object without consuming meaning which is a major part of the modern commercial world. People like having things and it has come down to the quality and quantity of what you have as to how you are perceived by others in society. Twitchell states in his article that the American Century will be the next era and that it will likely be the commandeer of the 21st century.

So basically American culture is well on its way to being recognized and used by cultures all over the world. It will soon be the new world culture. Korten states that the United States has been the world’s most aggressive national proponent of economic growth and consumerism as the tickets to happiness; however what did clearly increase in the United States over this period were measures of depression, anxiety, distrust and psychological dysfunction. Although this article focuses on consumerism being a positive development for the 21st century, Korten shows that along with consumerism comes many personal and social issues.

In the article Needing The Unnecessary: The Democratization of Luxury he talks about how consumerism has changed from the 1950s to the twenty first century. In the 1950’s the wealthy upper class people were the ones who had the luxury items and they could flaunt what they had. But if you were a middle class person who had luxury items you had to be very subtle about it. If you flaunted what you had you were frowned upon by other people in society because luxury items were lightly tainted with shame. In the 21st century it is completely the opposite. Since the 1980’s more middle class people have been buying more luxury items as opposed to the wealthy. Alot of people are buying things they can’t afford with money they don’t have by using credit cards, loans, mortgages and cash advances. This allows more middle class people to buy more luxury items as opposed to wealthy people, but this doesn’t mean they can actually afford it which in time can cause many more problems.

According to Twitchell to understand the material culture in the beginning of the 21st century, you have to understand the high importance of unnecessary material. It is believed that you are what you consume and practically everything you consume is not needed. Consumer culture focuses on community. People regardless of their class are buying more luxury items to look cool and also to be admired and welcomed by others of the same lifestyles. Earth Community offers an alternative to the alienation and the sorrows of Empire, a way of living that places life values ahead of financial principles of domination. Korten shows that in an Earth Community you don’t need luxury items to be accepted by society.

Consuming luxury has gone from telic (arousal reducing) to paratelic (arousal seeking). Consumerism provides individuals with a temporary “high on life”. Buying new things makes them feel momentarily happy, powerful and superior. These are all good feelings however they don’t last and many people who don’t have the resources to buy luxury items are buying them. This creates for them debt, stress, frustration and competitiveness. Those who can’t afford these luxury items show resentment for the ones who can. This causes tension in society and can create an Empire where people are competitive and hostile. The golden rule of Earth Community is do unto your neighbours as you would have your neighbour do unto you as you work together to create a better life for all.

Consumerism is focused towards making individuals happy as opposed to everyone. Those people who can’t afford to have the nice things are forced to live with daily reminders through advertisements of things they want but cannot have. Consumerism doesn’t create a better life for all but creates one for those who can afford it. Consumers are fully aware that they are more interested in consuming appearances rather than the object. They enjoy the status that surrounds the objects they buy/own.

Korten’s concept of Earth Community is in favour of creating relationships and developing communities by bringing people together. Twitchell makes a good argument showing how consumerism has brought people together. People can now blend into society by simply buying the latest fashions and are no longer being excluded due to their ethnicity, social status, family name, language or religion. High-end items are decreasing the past social restrictions for the 21st century. Twithcell states that high-end consumption promises to do exactly what critics of stuff have always yearned from namely, to bring us together, often traumatically. The transgenerational poor are excluded, as the bottom fifth of our population has not budged an inch in the luxe explosion.

Yet more people than ever are entering the much-vaunted global village because of consumption, not despite it. Consumerism is allowing for most people similarities that connect them together and eliminate the previous gaps between social classes. Korten states that relationships, not money are the true measure of well-being. What matters most is our connection to and participation in the life of community. If we were to define human progress by the measure of human happiness we would devote far less of our resources to making money and far more to building community. Korten shows that relationships are more important than money and Twitchell shows that consumerism can help build relationships.

As a supporter of David Korten’s concept of Earth Community consumerism makes people more interested in material possessions than community. Consumerism does have some good affects on the community but it restricts people moving away from an Empire towards an Earth Community. If people weren’t so busy trying to get the things they desired they would focus more on meaningful relationships. Korten shows that people who have lots of money are just as happy as people who don’t. When surrounded in a caring community money makes little difference in regards to happiness. Twitchell makes an interesting argument in favour of consumerism and shows that consumerism has an ability to fade the lines between social classes. Consumerism still ignores the extremely poor; however, it can create a larger community of middle and upper class. 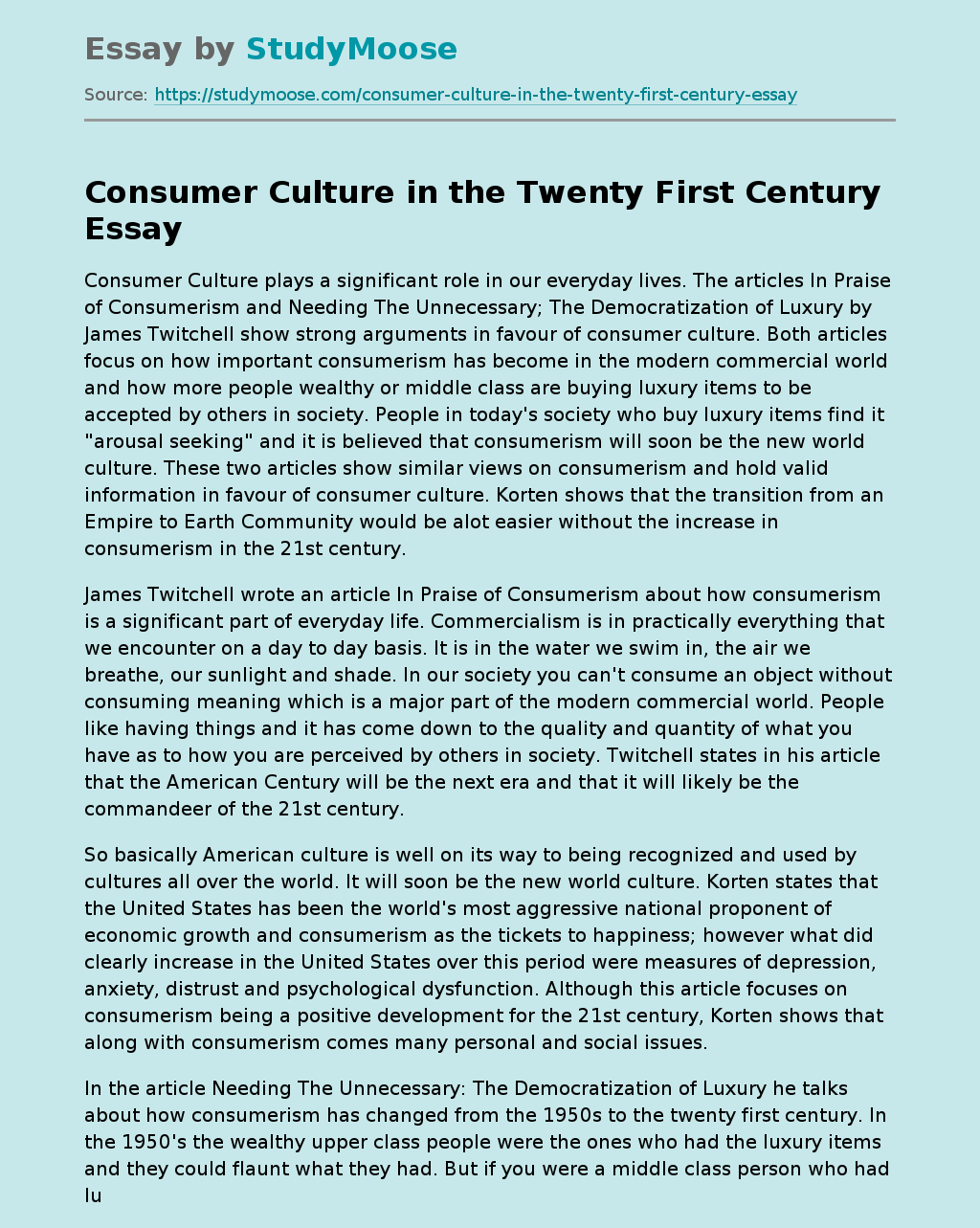