Consequently the cognitive perspective of learning explains why

Consequently, the cognitive perspective of learning explains why my ability to play was poor when I was in a mixed team. This is because gender stereotypes results in women being looked upon due to their being differences in female and males brains (Baron-Cohen 1994). As I categorised that women are bad at football and recognised that I’m a woman, this reduced my ability to outperform males in training. Ruigrok et al (2014) supported why I created these stereotypes where they found that the cerebrum (brain region used for learning) is 10% larger in males.

Don't use plagiarized sources. Get your custom essay on
“ Consequently the cognitive perspective of learning explains why ”
Get custom paper
NEW! smart matching with writer

This explanation may’ve contributed to why my male coach used the microaggression of: “You’re quite good for a girl.” Yet, these stigmatising views are slowly being reduced where Publis Sport and Entertainment (2019) stated that the Women’s World Cup final attracted a record breaking 82.18 million spectators.

Using this perspective to explain why myself and my coach used our schemas to stereotype women being worse at football resulted in cognitive bias when learning.

Thus, cognitive psychology is limited in terms of its individualistic perspectives. Instead, my learning could’ve been supported better by using the behaviourist perspectives explanation of operant conditioning. My male coach could’ve used negative reinforcement where consequences (such as my coach criticizing me when making a poor pass) could be eliminated when performing desirable behaviours (I.e. my coach saying perfect footwork and reducing the amount of critical comments). This would’ve reduced my perception of : “Girls are bad at football” and would’ve improved my learning in the mixed club.

Football helped me to maintain a healthy lifestyle, but I also had to visually and kinesthetically learn to cook foods that contain carbohydrates and minimal sugar to balance my diabetes. My cooking skills developed at 12, where I observed my mother cook the same meal every Monday and Friday and get rewarded for it. I then replicated the dish on the same following days where more complex skills were learnt every other week like steaming then roasting. I repeatedly and gradually learnt because the cognitive perspective states that the spacing effect (learning over greater intervals) increases information being encoded into long-term memory; improving my ability to replicate each dish. Also, during observations my mother made me write out every step she took so that I’d actively comprehend how the meal came together. If I became confused, I’d ask questions to assist my learning like: “Why did you simmer and not boil?” Yet, I felt pressure to succeed as my kitchen lights were bright

Consequently the cognitive perspective of learning explains why. (2019, Nov 16). Retrieved from https://studymoose.com/consequently-the-cognitive-perspective-of-learning-explains-why-example-essay 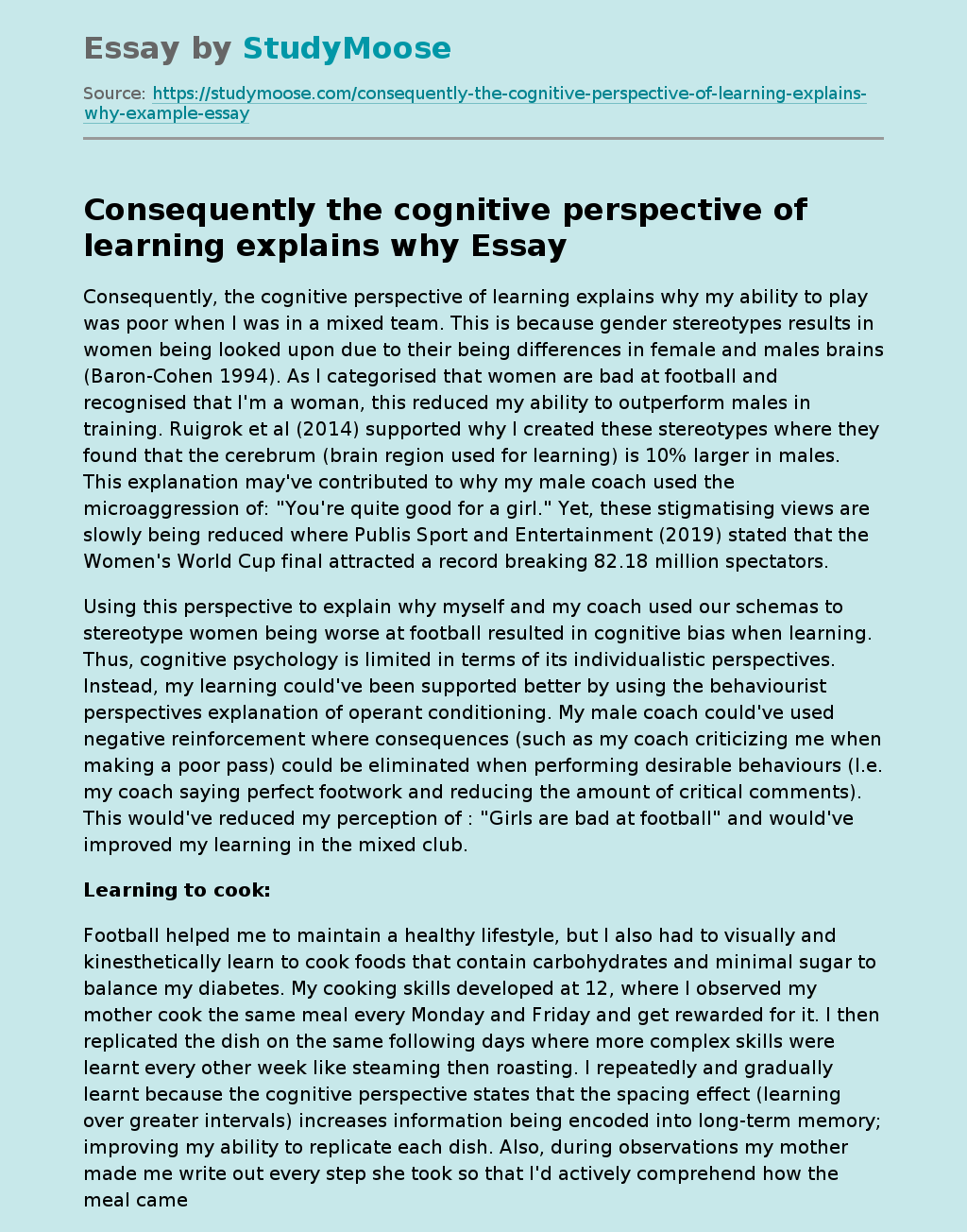