Concern for the Environment

Environment refers to everything that surrounds and influences an organism. Our environment is getting worse day by day, and we are suffering for other people and our mistakes. We might not be able to see all of the bad things in our environment, but they are for sure there. This could affect our families and our future one day. There are some problems affecting the environmental stability, namely- ozone depletion, enhanced greenhouse effect, global warming, and climate change.

First, what is ozone depletion? Ozone depletion is defined as the thinning of the ozone layer, caused by a group of manufactured chemicals called ozone-depleting substances (ODS).

Don't use plagiarized sources. Get your custom essay on
“ Concern for the Environment ”
Get custom paper
NEW! smart matching with writer

Burning fossil fuels – coal, oil and natural gas – releases carbon dioxide into the atmosphere. Cutting down and burning trees also produce a lot of carbon dioxide. Because there are more and more greenhouse gases in the atmosphere, more heat is trapped which makes the Earth warmer. This is known as global warming.

Global warming is the increase of Earth’s average surface temperature due to effect of greenhouse gases, such as carbon dioxide emissions from burning fossil fuels or from deforestation, which trap heat that would otherwise escape from Earth. This is a type of greenhouse effect.

Climate change is a significant and lasting change in the statistical distribution of weather patterns over periods ranging from decades to millions of years. Global climate change will affect people and the environment in many ways. Some of these impacts, like stronger hurricanes and severe heat waves, could be life threatening. Others, like spreading weeds, will be less serious. And some effects, like longer growing seasons for crops, might even be good! However, as the Earth keeps getting warmer, the negative effects are expected to outweigh the positive ones.

From the previous discussions I have made, we already have known how ozone depletion, enhanced greenhouse effect, global warming, and climate change would affect the environment. I think, if ozone depletion would still continue, the rate of skin cancers, cataracts, genetic changes and inability of human systems to respond to infection, will increase because, much UV rays can now enter the earth. I also think that, if enhanced greenhouse effect would continue to increase, more heat will be trapped in the atmosphere that will result in global warming of the earth.

With connection to the enhanced greenhouse effect, if global warming would still continue, sea levels could rise due to the melting of glaciers and polar ice caps, and the current patterns of rainfall could change drastically around the world. With regards to climate change, if it would still continue, many larger cities could experience a significant rise in the number of very hot days. Air pollution problems would increase, placing children and elderly people suffering from respiratory problems.

Each and everyone of us should be aware of what is happening in our environment. We could reach out to people who don’t care about our surroundings and we could change their negative attitudes to positive ones in creating a better place for us to live in. I guess, by becoming more environmentally aware we can minimize the detrimental effect we have on our world by keeping ourselves fully informed about the bad effects of these environmental issues such as- ozone depletion, greenhouse effect, global warming, and climate change.

Concern for the Environment. (2016, Nov 26). Retrieved from https://studymoose.com/concern-for-the-environment-essay 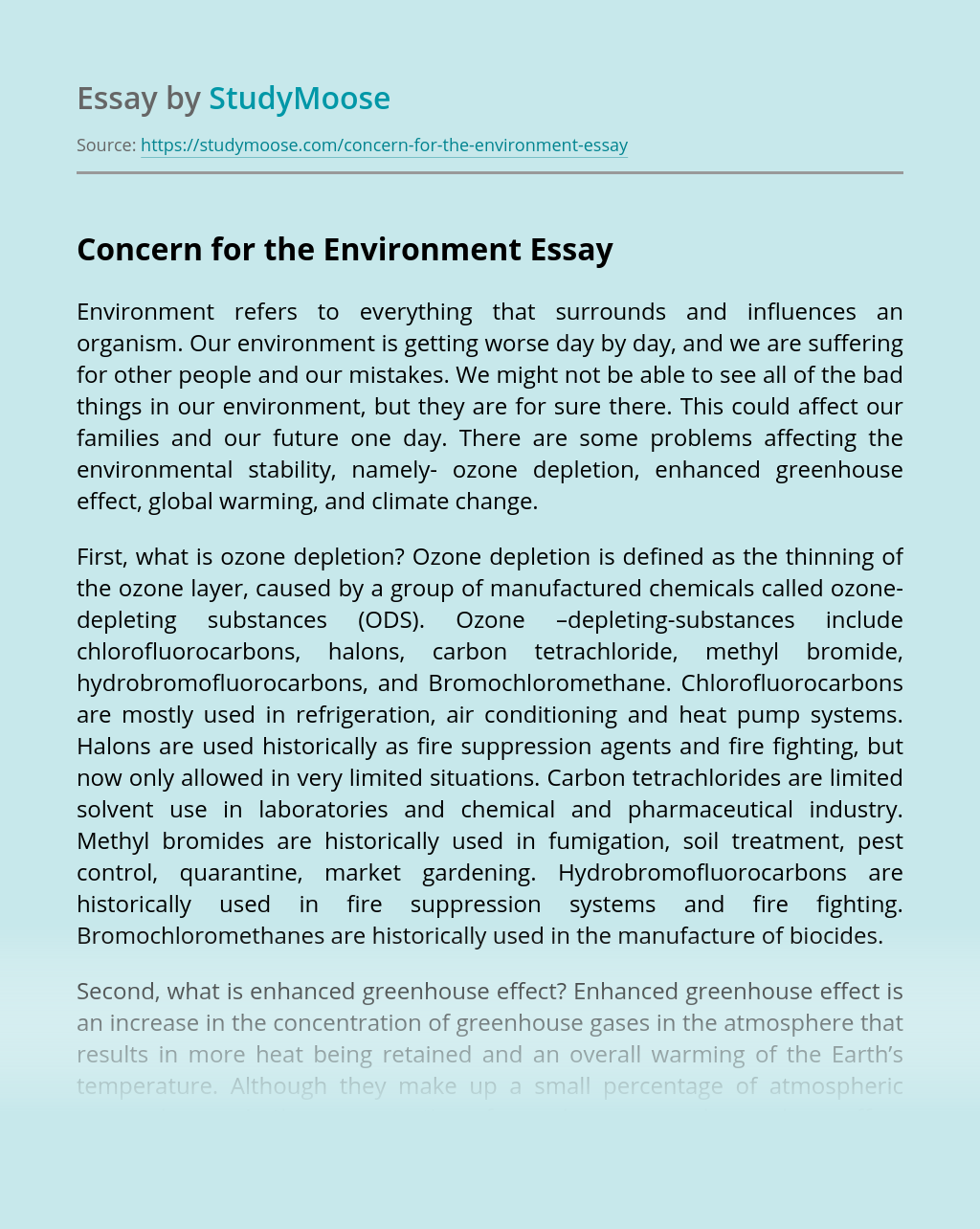