To do this, the essay will first explain the concept of what a rogue state is.

Don't use plagiarized sources. Get your custom essay on
“ Concept of Rogue State ”
Get custom paper
NEW! smart matching with writer

It will define the concept and give details of where the concept originated from and why it is no longer used in US policy. Following this, there will be a discussion on whether countries branded rogues warrant the label or whether they have been labelled this because of American paranoia. Finally, it will analyse the behaviour that lead to North Korea being labelled a rogue and whether the label is deserved.

In contemporary terms, a rogue state is defined as “a state that regularly violates international standards of acceptable behaviour” (Griffiths & O’Callaghan, 2002, pg 280). Behaviour that would categorise a state as a rogue includes participating in activities such as developing weapons of mass destruction (WMD), history of antagonism towards the West, drug trafficking, failing to meet international treaties, sponsoring terrorism, invading or provoking neighbouring states and constructing long distance missile delivery systems (Griffiths & O’Callaghan, 2002, pg 280).

These states are grouped together because they are believed to pose a threat due to their common disregard for the accepted norms of international society and yet they are not linked by treaty or formal alliance (Klare, 2000).

Where the concept of a “rogue state” originated from can be traced back to the Cold War era. Before the 1980’s, states such as Uganda, Cambodia and South Africa were termed “outlaw” or “pariah” states by US policy makers due to their unacceptable behaviour towards their own people.

At that time, the label was not in relation to the states behaviour in the international community (Litwark). However, in 1979 the concept of “outlaw states” was changed when the US State Department released a list of states that sponsored terrorism, shifting the criteria that classed states as rogues from their domestic conduct to their external behaviour (Litwark). The characteristics that evolved as the rogue archetype during the 1980’s were Third World countries that supported terrorism and attempted to acquire WMD’s or deliver them, countries such as Iran, Iraq, Libya and North Korea (Litwak, 2001).

It was in late 1989 that the Rogue doctrine appeared as the basic template for US military strategy in the post Cold War era. General Colin Powell created this new post-Soviet military policy in which regional strategy focused on threats posed by the rogue states, instead of the containment policy directed at the Soviet threat (Klare, 2000). In mid 1990, Bush approved General Powell’s strategy and gave a speech in Aspen about the strategies parameters in August of that year (Klare, 2000).

The night before President Bush gave his speech, Iraqi troops began to move into Kuwait. This incident lead to the Gulf War and the widespread use of the term “rogue state”. “As news of the elaborate Iraqi preparations for nuclear, chemical and biological warfare became widely known, the “rogue state” concept took hold in the think tanks and the media, driving out all competing strategic paradigms” (Klare, 2000) August 1990 to February 1998 could be considered the golden age of the rogue doctrine.

During Clinton’s term as President, he had promised to revaluate military policy and yet when Secretary of Defence, Les Aspin reviewed military policy, he left it practically unchanged. The policy proposed to maintain sufficient force so that two major region conflicts occurring at the same time or “nearly simultaneously” could be fought and won. This was in essence the same as Powell’s original policy. Again in 1997, a policy review was carried out and again, a stance aimed at defeating two major regional conflicts was put into place.

These events show the potency of the rogue state model in the minds of US policy makers (Klare, 2000). Interestingly, in June 2000, the State Department announced that it would be removing the term “rogue state” from US foreign policy in favour of the more diplomatic term “states of concern” (Litwak, 2001). The term was changed due to various reasons. Firstly, the term rogue is an American political concept that has no status in international law.

Due to this, the United States were inconsistent and selective in the way that they would brand states as rogues. Some states that displayed all the criteria of a rogue, such as Syria, were not named accordingly, while other states such as Cuba, met only part or none of the criteria and were on the rogue list. The label rogue also didn’t include those states whose domestic behaviour violated international norms, including Burma and China (Litwak, 2001). Secondly, the rogue state policy had significant political costs.

In the late 90’s, the policy caused a lot of argument between America and its chief allies, Europe, Japan and Canada. Much of this contention is due to extraterritorial sanctions against foreign companies trading with rogue states. These secondary sanctions were viewed by many as counterproductive and wrong in principle. These sanctions had a lot of adverse political impact for the US president and soured relations with key allies (Litwak, 2001). Thirdly, converting the concept into policy limited strategic flexibility.

Labelling states rogue meant grouping these states together who demonstrated certain behaviour and lead to a “one size fits all” approach of containment and isolation. These states were lumped together and demonised because of the policy. The policy also limited the ability of the administration to pursue policies that addressed the unique circumstances within each country (Litwak, 2001). For these reasons, the State Department chose to remove the concept “rogue state” from policies and replace it with “states of concern”.

It is hoped that from the change, policy makers will alter their strategies so that they focus on the issues in each state more directly and specifically instead of dealing with all the states collectively. There are two sides to the argument of whether the concept of rogue states is merely a construction of American paranoia or whether is an appropriate label for certain countries. On one hand, there is legitimate reason for these countries to be labelled rogues. Each has shown, to some degree that they are a threat to international peace and stability (O’Sullivan, 2000).

North Korea, Iraq, Iran and Libya’s support of terrorism and Iraq’s use of chemical weapons against Iran are just a few examples of behaviour that was and is of great concern to the international community (O’Sullivan, 2000). After the Cold War, America became the sole superpower. Due to this, they believed it was their responsibility to attempt to bring these states into line with internationally acceptable behaviour and maintain peace (Litwak, 2001). In 1994, National Security Advisor Anthony Lake wrote a controversial article called “Confronting Backlash states”.

This article named Iran, Iraq, North Korea, Libya and Cuba as members of the rogue gallery. He stated that “As the sole superpower, the United States has a special responsibility for developing strategy to neutralise, contain, and through selective pressure, perhaps eventually transform these backlash states into constructive members of the international community” (Litwak, 2001). The global risk of these states developing weapons of mass destruction and supporting terrorism poses a great threat to the global community.

Terrorism has had a huge impact on the international community in recent years particularly September 11th. This terrorist act shook the United States to the core. It is this event and others around the world that have given the US a driving force to stop rogue states from supporting terrorism (O’Sullivan, 2000). The proliferation of nuclear weapons has also been a major concern to the global community. The Nuclear Non-Proliferation Treaty, signed in 1968, distinguished between those who do and do not possess nuclear weapons (Griffiths & O’Callaghan). 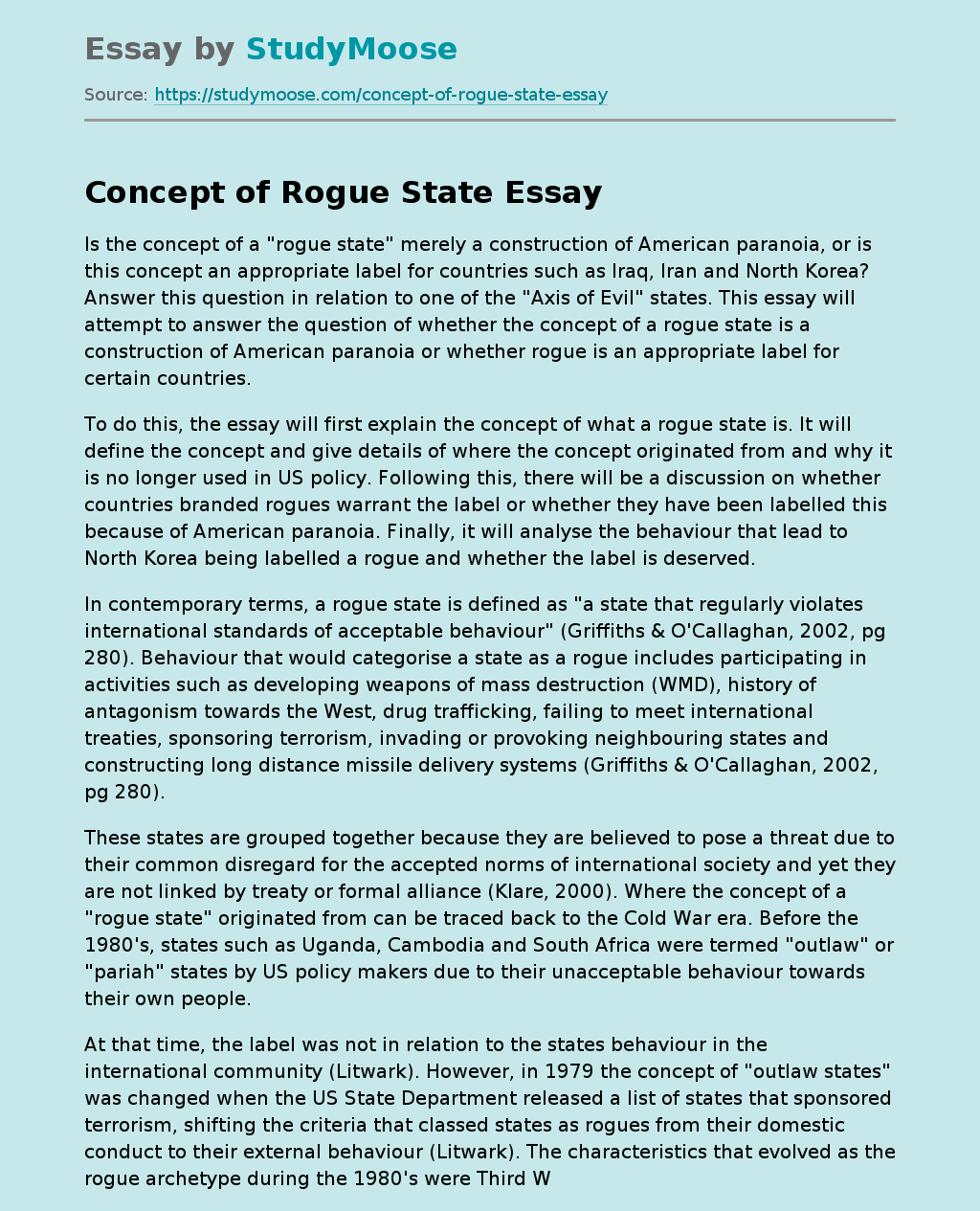