Concept of Plight for Love in Literature

Running away from what she thought was happiness, she falls into the same trap again for twenty years and finally finds true love, but only for a fraction of time. In Their Eyes were Watching God, by Zora Neale Hurston, Janie continuously searches for love causing her to move from man to man to fulfill this desire. Janie is freedom-loving, which is considered atypical of a woman at the time, resulting in her dominant husbands to constantly suppress her and treat her poorly.

Don't use plagiarized sources. Get your custom essay on
“ Concept of Plight for Love in Literature ”
Get custom paper
NEW! smart matching with writer

Hurston uses Janie’s unfulfilled marriage to Jody Starks and love for Tea Cake to convey the harsh truth of the implementation of traditional gender roles: that people who abide by them will not prosper.

Janie’s feelings toward Starks change as she becomes unsatisfied due to the power imbalance in their relationship, causing the bitter end of him. Starks, being the mayor, an authoritative figure, dominates Janie and restricts her freedom, exemplified when he says, “Thank yuh fuh yo’ compliments but mah wife don’t know nothin’… Ah never married her for nothin’ lak dat.

She’s uh woman and her place is in de home” (43). Starks rejects the proposal that Janie say some words in honor of the lamp post, justifying that with his idea of the role of a married woman. He is so consumed in his belief of this traditional gender role that he demeans Janie in front of the whole town. Starks feels that Janie is an object of his possession, which is illustrated when he sees other men going after his wife.

“Her hair was NOT going to show in the store…She was there in the store for him to look at, not those others” (55).

Joe proves that his wife is to only serve the purpose of pleasing only him, and he will control every little thing about her, demanding that she wear her hair in a certain way so that she does not distract or attract any of their customers. He acts this way because he feels his marriage will be threatened, knowing Janie is still a beautiful woman, regardless of her age, while he looks old. Starks uses his physical power to control Janie, who feels inferior as she is unable to express herself. Janie musters up courage when talking to Starks, as he is on his deathbed and in denial of his wrong doings, and says, “ …befo’ you die… Listen, Jody, you ain’t de Jody ah run off down de road wid. Ah run off tuh keep house wid you in uh wonderful way. But you wasn’t satisfied wid me de way Ah was” (86).

Janie expresses that what Starks gives her, a nice house, clothes and money, is not what she wants from a marriage and that she wants to do what brings her happiness, as a woman, and not what others recognize as happiness for her. His ego causes Janie to live away from him, and due to the lack of care, Starks becomes very unhealthy. Starks shows through his control over Janie that men who do not give up their ego and treat their significant other as an equal, will not prosper in life, as he dies in denial and bitterness.

Despite their separation, Tea Cake is the only one to have Janie’s heart because he does not restrict Janie’s freedom nor controls her. Janie’s new marriage to Tea Cake gives her a another chance in life to live her dream life. With Tea Cake, she is able to have fun and is truly happy, as she is not suppressed nor controlled. She is experiencing the things that she never would have thought she would do due to her previous marriages. Janie truly loves and cares for Tea Cake, shown when she prays, “Ah been so lonesome, and Ah been waitin’, Jesus. Ah done waited uh long time” (120). This shows that she has been waiting for Tea Cake to return for a couple of days, but she is also saying that she has been waiting a long time to find someone like Tea Cake who she sincerely loves. She prays to God because she no longer feels the loneliness that she feels in her past marriages and does not want to feel lonely again, thus making her pray to God to not take Tea Cake away from her. In this marriage, Janie is able to speak her mind, shown when she yells, “Tea Cake, if you don’t hurry up and tell me, Ah’ll take and beat yo’ head flat as uh dime” (122).

Although there is some foul language, this shows the level of comfort Janie feels with Tea Cake as she is able to speak her mind, whereas in her previous marriages, she was condemned and suppressed when trying to do so. Janie’s everlasting love and respect for Tea Cake is shown when she replies to Phoebe, “They don’t need to worry about me and my overhalls… Tea Cake got me into wearing ‘em…Tea Cake aint waste up no money f mune, an he ain’t left me for no young gal, neither. He give me every consolation in de world. He’d tell ‘em so too, if he wasn’t gone” (7). From this, it can be seen that Tea Cake’s beliefs are staying with her, despite his absence, and she stands with him and supports him. She does not allow others to think low of him nor think that he used her for her money, showing that Tea Cake is appreciated, whereas Janie’s previous husbands are not even thought of. Hurston uses Tea Cake to show that men who do not implement the traditional gender roles will be acknowledged and admired.

Hurston, a woman ahead of her time, uses fictional characters in her late-received novel to convey that those who are display misogynistic attitudes will not reach personal fulfillment nor will live their best lives. Hurston emphasizes, through the characterization of Jody Starks, and Janie’s reminiscence of Tea Cake to show that men who disregard traditional gender roles will reach personal fulfillment.

Concept of Plight for Love in Literature. (2021, Dec 03). Retrieved from https://studymoose.com/concept-of-plight-for-love-in-literature-essay 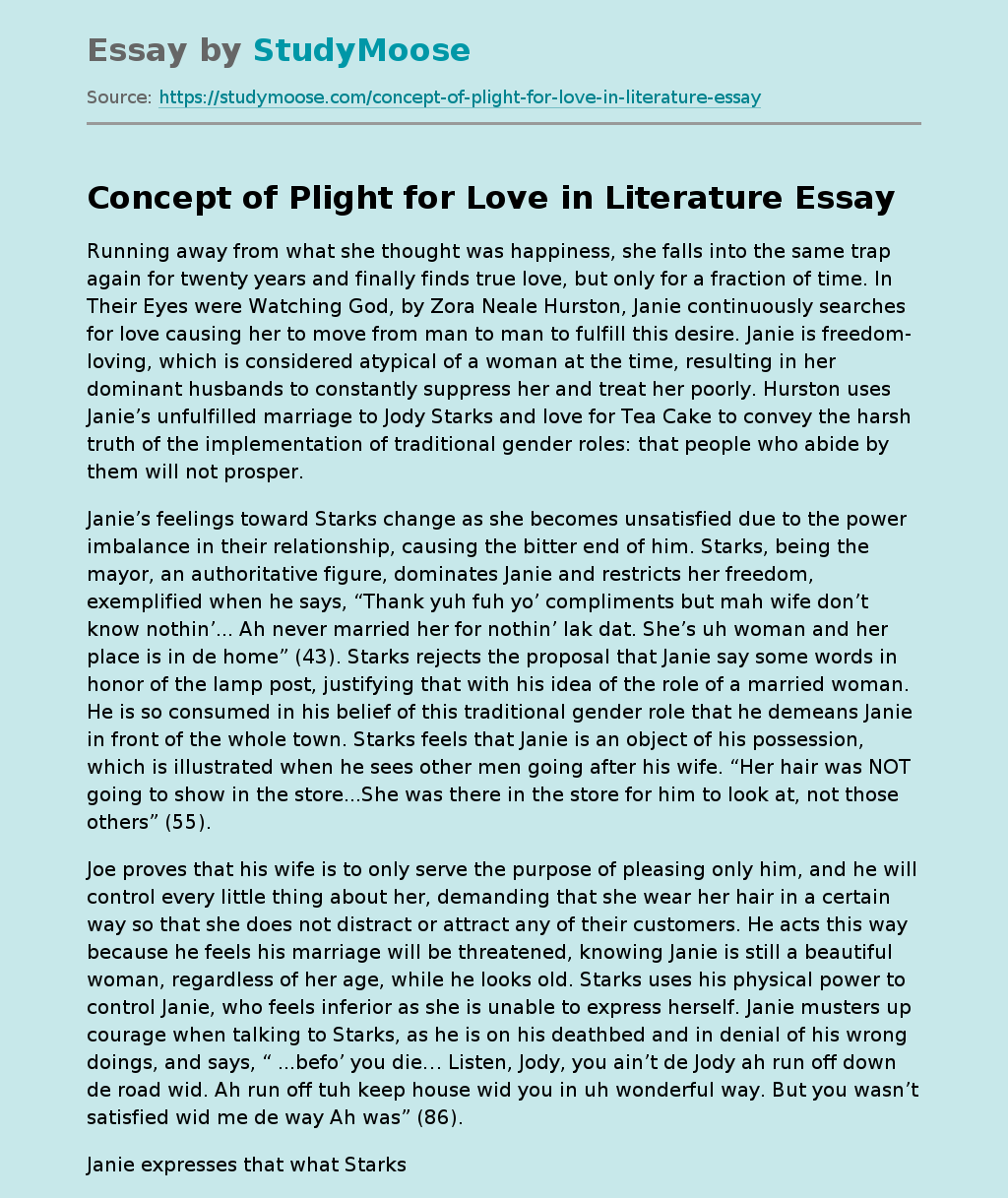