Oedipus was a true loyal greek king to the people of Thebes. He was also a tragic greek hero who fulfilled a prophecy to kill his father, marry his mother, and bring destruction to his city and family. However, his legend still lives on Creon, the next King of Thebes. Both legends have received great power over their reign as king of Thebes, but brought corruption and love to the people of Thebes. In The Theban Plays, Sophocles depicts Oedipus and Creon as prime examples of corruption and pride.

Don't use plagiarized sources. Get your custom essay on
“ Concept of Kingship in Sophocle’s Oedipus Rex ”
Get custom paper
NEW! smart matching with writer

He uses their actions as kings to define their kingship. Absolute power can corrupt even the mightiest of heroes.

King Oedipus assumes that Creon is plotting against him for “unjustly” rulings. King Oedipus didn’t take the plot well. Oedipus uses his power to give Creon the death penalty. However, this was a form of corruption but a sense of loyal and self-defense towards himself and the people of Thebes. Oedipus uses his statue of power to control the situation in his favor.

The following line states he is right in his mind about Creon plotting against him. No matter what anybody else says, Oedipus believes he is right because it’s his kingdom and a king must rule.

“Oedipus: By no means. I would have you dead, not banished.
Creon: If you can show me the way I wronged you-
Oedipus: Still clinging to your obstinate arguments?
Creon: Because I know you are wrong.
Oedipus: I know I am right.
Creon: In your own eyes, not mine.

…………
Oedipus: Kings must rule.
Creon: Not when they rule unjustly.”

Oedipus claims to be a world famous king. Oedipus came into a position of power which made him more self-absorbed in himself. Oedipus claims he is world-famous. Oedipus states “Here I am, myself, world-famous Oedipus”. This statement proves Oedipus is leaning towards the corrupt end of power. He believes he can solve the world’s problems because he is king. Throughout The Theban Plays, a shift occurred in Oedipus’s behavior. Oedipus shows to be caring and self-defensive towards his people and against Creon. The mix of behavior can be interrupted in one of two ways, which includes caring and protective. Oedipus and Creon were not on great terms at the beginning of the play. Initially, Oedipus wanted Creon’s head but instead showed mercy to him. Oedipus states “ Then let him go; even though it mean my death Or exile in disgrace. Your voice, not his, has won mercy; him I hate forever.”. Oedipus shows mercy but ruthlessness towards Creon. He says “ Your voice, not his” which translates into a 3rd party convincing the king to spare Creon. Another example of Oedipus’s wrongdoing is asking Creon to leave Thebes. Creon’s response shows the wrongfulness of King Oedipus. Creon knows that Oedipus is wrong, but Oedipus believes he is right in his own way because he is simply the king.

“Oedipus: Will you begone?
Creon: I will; unjustly judged by you alone.”

Oedipus still believes he is right about everything. He decides to uncover the mystery of his birthright with an iron fist. His wife Jocasta suggests that he should not pursue this trail because it will be for his own good. Oedipus states “ There is nothing to fear. Though I will be proved slave-born To the third generation, your honor is not impugned.” Oedipus is determined to see this through to the end. His choice of words reflects the personality of his prideful character side. Jocasta begs for Oedipus to not dive deep into this mystery, therefore destroying himself.

Oedipus begins to corrupt himself as King of Thebes. The shepherd, Teiresias, was brought in for questioning about a baby from long ago. As the conversation moves along, Oedipus grows irritated from the abundance of questions being asked. “ Answer! If I must speak again, you die!”. The wrath of Oedipus terrifies the shepard into doing his bidding and revealing the baby’s true purpose. That baby was “casted” a wicked spell to kill his own father. Oedipus had the thought of actually killing a man who had the knowledge of the baby. His corruptness ultimately led to his downfall as king in later years. His arrogance led to Oedipus poking his eyes out, causing him to go blind. Oedipus finally learns the truth about his upbringing. He learns that he killed his own father, Laius, and marrying his mother, Jocasta.

In Oedipus the King, Creon seems to rule with reason. Throughout the play, Oedipus loses his cool and starts to behave wildly. Oedipus yells to be banished, Creon opts to protect Oedipus with a gentle approach. In the end, Creon proves himself to be a good leader of Thebes.

“Oedipus: Cast me away from this instant
Out of this land, out of the sight of man.
Creon: Be sure it would have been done without delay,
But that I await instruction from the gods”

Creon has a clear level head when Oedipus lashes out. Due to Oedipus’s corruption as king, Creon knows that Oedipus is wrong but lets the gods handle his punishment. Creon shows respect for himself before the gods. Creon began his rule over Thebes with a Iron fist. He takes on great responsibility during the kingless times of Thebes. Creon says “Old man- all of you! So, you shoot your answers at my head like archers at the target, I even have him loosed on me, this fortune-teller.” This shows the determination of king Creon ruling Thebes.

Creon was ultimately the next ruler in line for the kingdom of Thebes. Oedipus corrupted himself out of the throne and Creon soon took the position. Creon also has a mix of emotions towards his own kingship in Thebes. Creon shows emotions of caring and ruthlessness. An example of his wrath is his trust for his own men. He states “ Everyone – the whole crew bribed to commit this crime…”. This statement proves the fact that Creon was a semi-good king. Creon suspected his own me of treacherous acts in his kingdom. Creon was concerned with a body being buried. Soon, Creon was becoming more and more irritated with responses being received about the dead corpse. Creon and Haemon never had the best relationship. Creon threatened to kill Antigone in front of Haemon. Haemon often questions the authority of Creon which leads to the ultimate suspicion. Creon also becomes more upset at the citizens of Thebes. The people began to question his authority on how to rule Thebes. Eventually, Creon promises a living death for Antigone. Creon would enclose her alive in tomb and buried alive.

In Oedipus at Colonus, Creon comes out as manipulative, who was willing to do anything to achieve his own goals. Creon notices that his words have no effect on Oedipus, therefore he holds Antigone and Ismene against their will. He also threatens Theseus with war, due to his own selfishness. Creon appears to be a ruthless leader before the gods.

Creon realizes that his hubris has not let him deal with his conflicts. Creon has said, “I have been rash and foolish.” He acknowledges that his pride took over over character. Creon realizes that his foolishness causes the death of Haemon. Creon did not listen to Haemon nor take his advice. Creon wanted the best for himself but ended up corrupting himself. Creon couldn’t see that Haemon was in love with Antigone. Creon wanted to honor the dead because of his hubris. Finally, Creon says, “My own blind heart has brought me from darkness to final darkness.” This explains how he was blinded by his own corruption to see the destruction he brought upon himself. Creon headed in the wrong direction with his pride. Ultimately, it led to the end of his reign of the king. 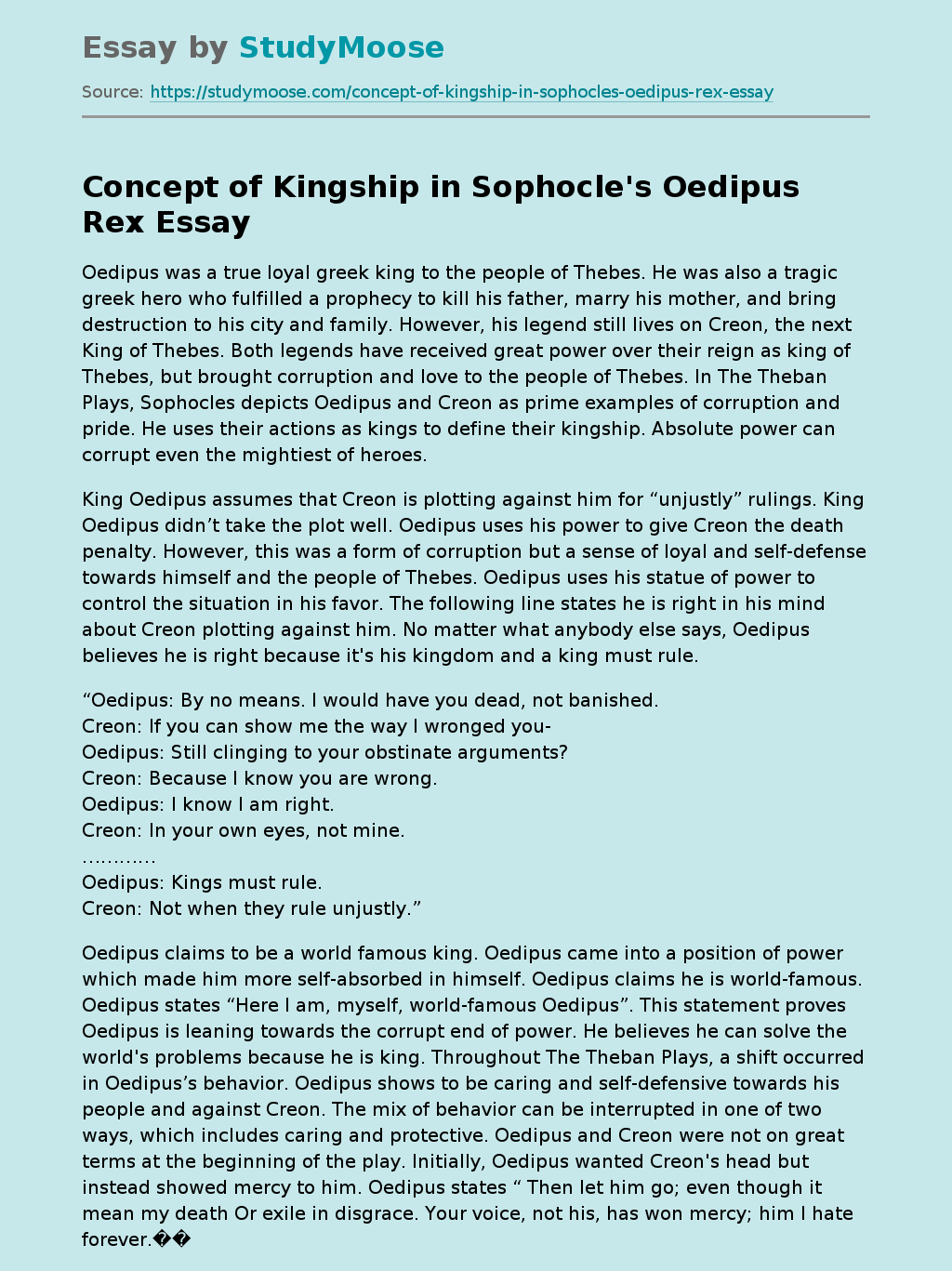