Turn in your highest-quality paper
Get a qualified writer to help you with
“ Concept of examination malpractice ”
Get high-quality paper
NEW! AI matching with writer

(vii) Any wrong doing, misconduct, dishonesty or improper practice for personal gains, or violation of set rules of conduct during examinations. (Jegede, 1996 in Jega, 2006).

(viii) Any act of omission or commission which compromises the validity, reliability and integrity of any assessment or evaluation system (i.e. the violation of, or disregard for examination ethics (Obo, 2008). (ix) Obot (1997) defined examination malpractice as wrong (illegal/immoral) doing in terms of acts of commission or omission during the construction, custodianship, administration, marking and release of results of examination before, during or after such examinations.

(x) Joshua (2008) synthesized many definitions of examination malpractice by defining the concept as any unauthorized or unapproved action, inaction, activity, behaviour or practice that is associated with the preparation, conduct and processing of examination and other forms of assessment, and carried out by any person involved in preparing for, giving, taking and processing that examination at any level (p. I).

From these various definitions presented, and many other ones in the literature, examination malpractice is noted as fraud within the school system, and does occur at all levels of education, right from nursery/primary, through secondary to tertiary levels of education in Nigeria. Infact, examination malpractice is a peculiar ‘corrupt practice’ within the educational system. This practice is thriving strongly in our system, irrespective of religious affiliations of the various stakeholders in the school system, thus making it a real “monster”. This concept is a real monster because the culture of hard work, academic excellence, honesty, decency are fast eroding the present generation of youths in different institutions of learning. This Monster, Examination Malpractice, tends to weaken the validity of any examination, and to make examination results worthless and unreliable. Actually Examination Malpractice produces “error scores” in examinations, where students earn marks/scores above/below their abilities, and the long terms effect is wrong placement in schools and employment of unskilled workers into various sectors of the economy.

USE OF THEORY OF MEASUREMENT ERROR TO EXPLAIN THE MENACE OF EXAMINATION MALPRACTICE The harm perpetuated by EM can be properly understood using a popular Educational Measurement Equation, which is: X = T + E

It is to be noted that the undeserved or strange score brought about by examination malpractice is embedded in error score (E). A cursory look at the equation shows that: i) The difference between X and T is the Error Score (E); ii) It is our noble desire that as much as possible, X is close to, if not equal to, T; iii) The smaller the value of E, the closer is X to T (in fact, if E is zero, X = T). Conversely, the bigger the value of E (courtesy of EM), the farther is X from T. iv) If E is very large, T diminishes, and X approaches E. This implies that the higher the value of error score occasioned by examination malpractice, the more the school and public examination scores deviate or diminish from true abilities of those who make or own those scores.

Those scores essentially but embarrassingly represent/reflect errors and intangibles, and everything else apart from the actual/true abilities of their owners. Little wonder then that some owners of high scores in our school/public examinations can hardly perform or exhibit behaviours that are consistent with the high scores; and how some school graduates can hardly perform to the expectation of the society/employers. That is the harm by EM. Implications of Examination Malpractices on Nigerian Youths

This unfortunate development in our educational system represents a high sophistication to which examination malpractices had risen in recent times. Sadly too, some parents have been found to encourage the perpetuation of this ugly act by their children/wards either directly or indirectly. Not only has this contributed to the diminishing standard of our education, but it has also helped to cast aspersion on individual candidates’ certificates, which many often claimed, have not always been a true reflection of their academic standing. Due to this weak background, it is not surprising therefore that many candidates who secured admission into higher institutions with such results have been much of a disappointment.

They simply could not leave up to their billings in all ramifications. Attendant frustration often result in sundry other malpractices in examinations to such an extent that they are sooner or later certified as academically unfit and marked for withdrawal on academic ground. Desperate ones among them would want to do all things possible to hang on. This often take them to all kinds of anti-social vices, prominent among which is cultism. The individual, which is the bedrock of the society, is by this token, being malformed and deformed for the future. There is no doubt therefore, that all kinds of examination malpractices stand condemnable by all the stakeholders in the education sector. This is for the simple fact that to compromise academic standards is one sure way to mortgage, if not the present, certainly the future of a people.

Our today, and whatever it stands for, represents the foundations of our tomorrow. Prevalence of examination malpractices, especially the mercenary syndrome, indicates the weak foundations upon which we are to build our tomorrow therefore. Yet, our credible and lasting tomorrow is already being endangered with this ever-increasing wave of academic frauds and immoral dispositions (Issa, 2003). Although many of such students end up with brilliant results, especially at external examinations, they often find it difficult to live up to those results after securing admission into institutions of higher learning. Their apparent inability to cope well in their studies, quite often, leads to frustration thereby encouraging their environment into cultism and other related social vices. The bulk of them end up badly in their academic pursuits while the remaining few who would have crookedly sailed through to the end become social misfits.

For one, they are hardly good at their jobs even as the anti-social tendencies remain with them throughout life. Yet, human resources have been considered the most vital of all resources needed for both individual and societal developments. Incidentally, the education system represents the most veritable instrument with which human resources could be created and developed. It therefore goes without saying that the individual and society’s success in ensuring the laying of a good foundation for our tomorrow lies in our ability to rise above the challenges posed by this trend in examination malpractices and cultism.

The Way Forward
Hope is not lost yet once we are alive to the rescue mission. With respect to cultism, one cannot but agree with Odili (2004) on his 7-point agenda for a way forward, which are:

1 Moral Upbringing of Children.
2 Public Enlightenment Advocacy by the Media.
3 Re-orientation in our Tertiary Institutions and Better Funding.
4 Integrity Watch for Business, Community and Political Leaders.
5 Anti-cult Law
6 Law Enforcement
7 Job Creation and Good Governance
Beyond enforcing the relevant laws on campuses, the government should step out to improved the university environment, which tends to be a fertile ground for breeding cultists. Given the uncongenial condition of the universities, bereft of teaching and learning materials, teachers’ incessant strikes, examination malpractices and school shut downs, students have found cult activities quite appealing. Their utmost goals of vain glory and supremacy are cheaply attainable through enlistment in cults. If universities are meant to impart knowledge and mould character, while their degrees and diplomas are awarded only to people found worthy in leaning and character, then any student identified as a cultist, murderer, or robber should be punished accordingly.

They must not be allowed to remain hit-squads and agent of destruction of lives and property. Only the full weight of the law can warn them that cultism is evil, and pays no dividends. As for the case of examination malpractices, there would be the need to change our orientation and value system, which seemed to emphasize the erroneous at all cost and by all means belief, which are not only negative but also counter-productive. It is high time we begin to have a sound realization of the fact that it is not only by having a degree that one can succeed or excel in life. It is much more beyond that, because there are still a score of people who, in spite of not having a degree, actually succeeded and excelled in their chosen careers. The point must also be made that it is far better to be a self-reliant, successful artisan than an unemployed, jobless and street-roaming degree holder.

If we succeed in this orientation bid, hopes are that majority of those that would remain will be those who interested in pursuing serious active studies would match the requirement and demands of a standard educational system. Finally, students must be made to understand and appreciate hard work, dedication and commitment to studies. This is where the teachers and the entire school authority need to be highly responsible and responsive. Students must be treated and dealt so as to encourage others to even better performance thereby looking up to them as source of inspirations. At that point in time, when the majority would have come to appreciate hard work, examination malpractices in general, the mercenary syndrome as well as cultism, would have been relegated to the status of an abnormality, as against the prestigious status they currently enjoy. 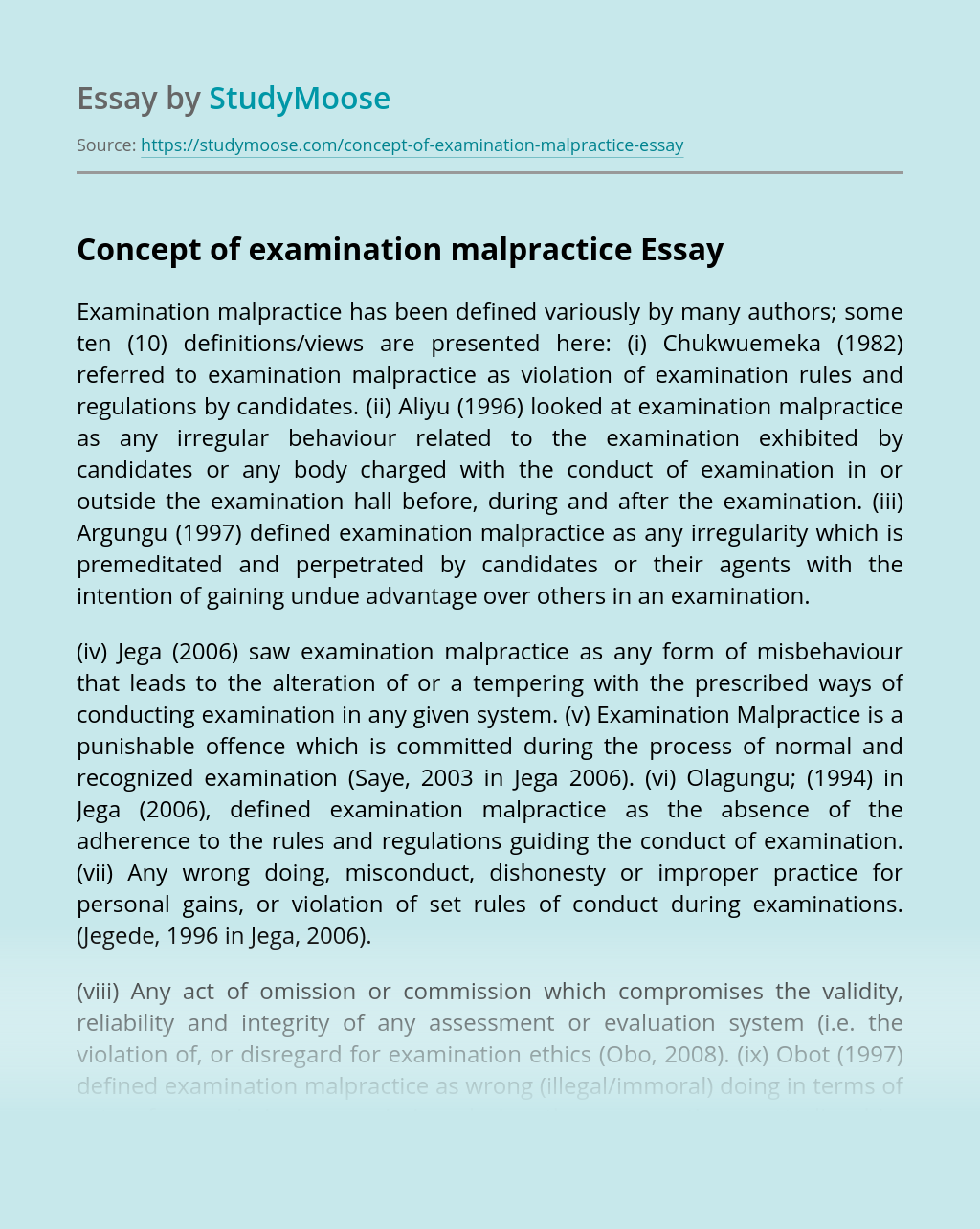 Turn in your highest-quality paper
Get a qualified writer to help you with
“ Concept of examination malpractice ”
Get high-quality paper
Helping students since 2015
Stay Safe, Stay Original