The IC (Integrated Circuits) technology was used in third-generation computers. In a small IC chip (5 mm square size) a circuit is designed having large number of electronic components like transistors, capacitors, diodes, resistors etc. Initially, an IC contained only about ten to twenty components. Thus the IC technology was named as Small Scale Integration (SSI). The third-generation was based on IC technology and the computers were designed using this technology. IBM 370, PDP 11 are among examples. Advantages

The main advantages of third-generation as compared to previous generations of computers were: Smaller in size Production cost was low Many input/output devices were introduced such as mouse and keyboard etc.

Don't use plagiarized sources. Get your custom essay on
“ Computer Generations ”
Get custom paper
NEW! smart matching with writer

Highly sophisticated technology required for the manufacturer chips. 4. Fourth Generation Computers (1971 to Present) Microprocessors The microchip technology was introduced in this generation of computers. With the advancement in IC technology, LSI (Large Scale Integration) chips were developed. It was possible to integrate over 30,000 or more components on to single LSI chip.

After LSI, the VLSI (Very Large Scale Integration) was developed and the development of microprocessor possible. It is expected that more than one million components will be integrated on a single chip of VLSI.

Disadvantages The main disadvantages of fourth-generation computers are: Highly sophisticated technology required for the manufacturer of microprocessor chips 5. Fifth Generation Computers (In process) Artificial Intelligence The main drawback of first to fourth generation computers is that the computers have not their own thinking power. These are totally depending upon the instructions given by the users. Computer devices with artificial intelligence are still in development, but some of these technologies are beginning to emerge and be used such as voice recognition.

AIl is a reality made possible by using parallel processing and superconductors. Leaning to the future, computers will be radically transformed again by quantum computation, molecular and anon technology. Fifth generation computers are supposed to be the ideal computers, but do not exist. The scientists are working to design such computers that will have the following features: Having their own thinking power Making decisions themselves Having capabilities of learning Having capabilities of reasoning Having large capacity of internal storage

Having extra high processing speed Having capabilities of parallel processing In these computers following technologies will be used: ULSIC (Ultra Large Scale Integrated Circuits) technology Artificial Intelligence (AI) technology also called the knowledge Processor. The AI means automatic programs that let the machines to think and decide themselves. The programming languages LISP (List Processor) and PROLOG (Programming with Logic) are used for artificial intelligence. The scientists at ICOT in Japan use the PROLOG to develop the Artificial Intelligence software. 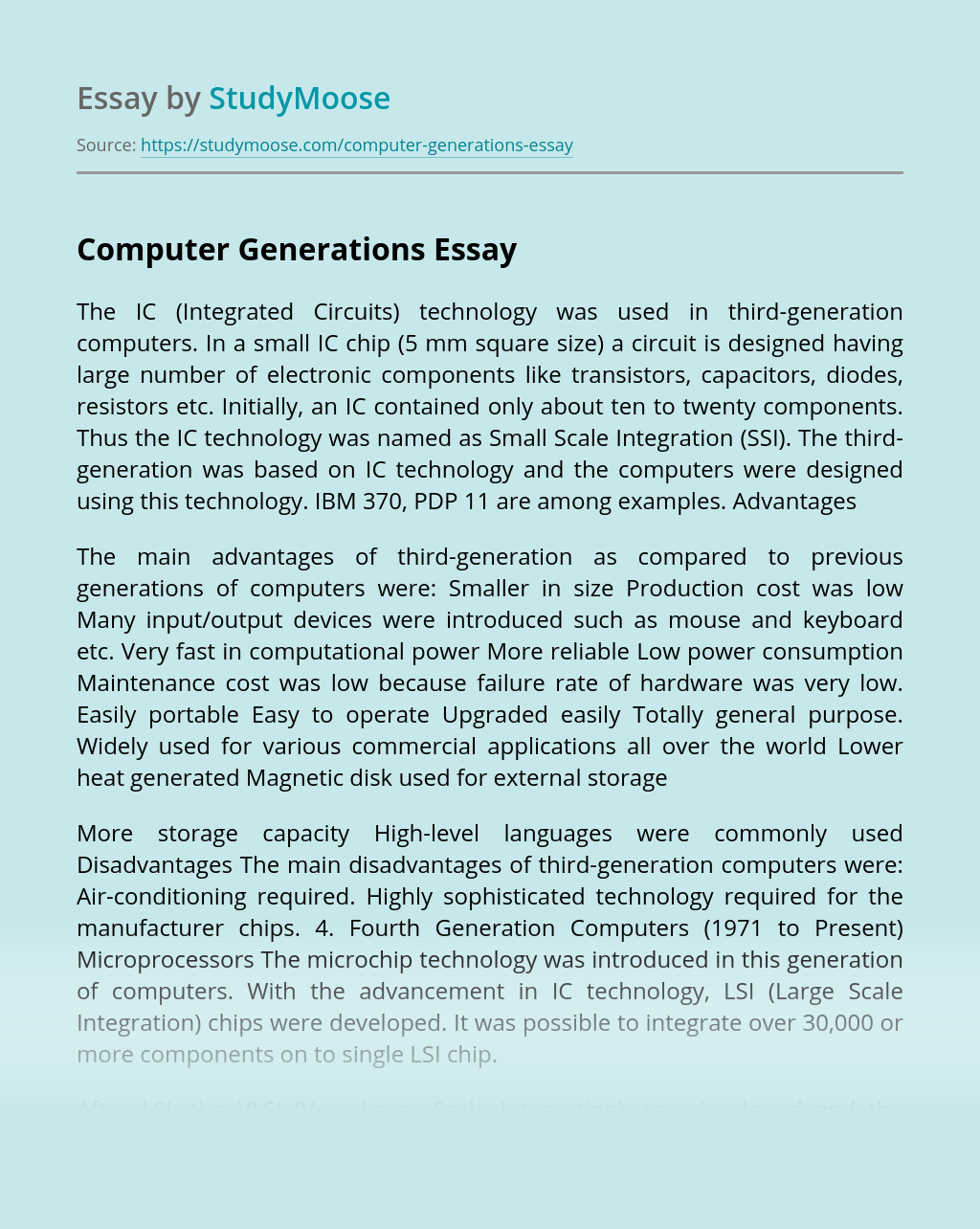