Comprehension of Prisoners Without Trial

Don't use plagiarized sources. Get your custom essay on
“ Comprehension of Prisoners Without Trial ”
Get custom paper
NEW! smart matching with writer

It’s unfortunate that Daniels does not provide the more substantive treatment he used in the volume he co-edited with Sandra Taylor, Japanese Americans, From Relocation to Redress. The history that led up to the internment was basically an anti-Oriental prejudice that began on the West Coast. When the Chinese immigrants started immigrating to the United States, they posed a social problem.

“As the numbers of Chinese laborers increased, so did the strength of anti-Chinese sentiment among other workers in the American economy.

Roosevelt. Daniels notes that, in California, “in the early 1900’s most of the political parties, the Republicans, the Democrats, and the third party, the Populist, along with the American Federation of Labor, were all against the Japanese immigration” because they believed that Japanese immigration was going to have the same result as the Chinese immigration.[2] The San Francisco Chronicle newspaper began a series of virulent attacks on the Japanese in America during 1905, matching some of the “worst tabloid trash-type journalism” that anyone has ever seen. The result was to further inflame public opinion which the politicians were then more than willing to use to further their own purposes. Daniels states that “politicians from different states were trying to get elected by appealing to the populace and their views. Thus, presidents such as Woodrow Wilson publicly shared his anti-Oriental views. Woodrow Wilson released a strong statement opposing Oriental immigration. What is even less known is that Wilson’s statement was not his own, but was written for him by his chief California backer, James D. Phelan of San Francisco.”[3] According to Daniels, this episode is significant for two reasons: first, it reveals the strong anti-Oriental bias of the leaders of the Wilson Democrats of California; second, it shows the degree to which an unauthentic expression of opinion can delude both the voter and the participants themselves. A very interesting thing is a breakdown of the types of businesses persons of Japanese ancestry who were involved in the city of Seattle and in different cities along the West Coast. As Japanese immigrants came to the United States, they came to the West Coast because of the economic success awaiting there. They ran hotels, grocery stores, dry cleaners, market stands, produce houses, restaurants, barbershops, laundries or gardening services. A lot of them were also involved in farming in rural communities. The Japanese went to America for more opportunities but at that time, there were only two colors that people recognized. Those two colors were white and black. The Japanese really wanted to be a U.S. citizen so they could own land. After they get the land, they could start their own business and make a lot of money. Without their own business, they had to work for whites at low wages. Japanese believed that the way out of low paying jobs was a good education.

There was too much discrimination against them so the second generation of Japanese in America had to follow the footsteps of their parents to low paying jobs. The Japanese were still very determined to make it big in America. They wanted to do whatever it took but the Japanese have to overcome a lot of discrimination from the white citizens. The Japanese were very smart but they weren’t able to do what they were capable of in the United States of America. The author talks about the war in Europe and how fast Hitler’s victories were. There was a belief in American government agencies that this happened because there was a vast “fifth column” of saboteurs and subversives that helped him, which was something that was totally untrue.[4] This same type of thinking, that the military of the “good” countries could not have lost so easily unless they were betrayed, was carried over into the attack on Pearl Harbor where, for a long while, the belief was that it was not our military’s fault at all for not being ready; it was all due to a massive number of persons of Japanese ancestry living in Hawaii that aided the attacking planes.[5] That, also, was totally rejected later, but was useful to the politicians for inflaming public opinion against the Japanese Americans. There was a proposal to let the Japanese Americans stay on the West Coast and just keep them away from any “sensitive” areas, but the politicians and hate-mongers were against such a limited program, wanting the “Jap problem” to be dealt with once and for all. Soon after Pearl Harbor the draft boards began classifying Japanese Americans as 4-C, which is a category reserved for enemy aliens.[6] Daniels also points out that, if it was so necessary for military reasons to remove Japanese Americans from the West Coast then that would have been even truer for the Japanese Americans in Hawaii where they formed almost a third of the population. The persons of Japanese Ancestry in California, though, only formed 2% of the population. Daniels later discusses the internment camp descriptions and places the events into four different phases: (1) Settling in (spring1942 – February 1943), (2) registration/ segregation crisis (February 1943-Janurary 1944), (3) draft crisis (January 1944- November 1945), and (4) leaving camp (summer 1946-March 1946). Overall, the book gives the reader a multi-dimensional view on the Japanese internment, which allows the reader to see the political and racial views behind the Executive Order 9066 and the internment of the Japanese. Citation:

Comprehension of Prisoners Without Trial. (2016, Apr 02). Retrieved from https://studymoose.com/comprehension-of-prisoners-without-trial-essay 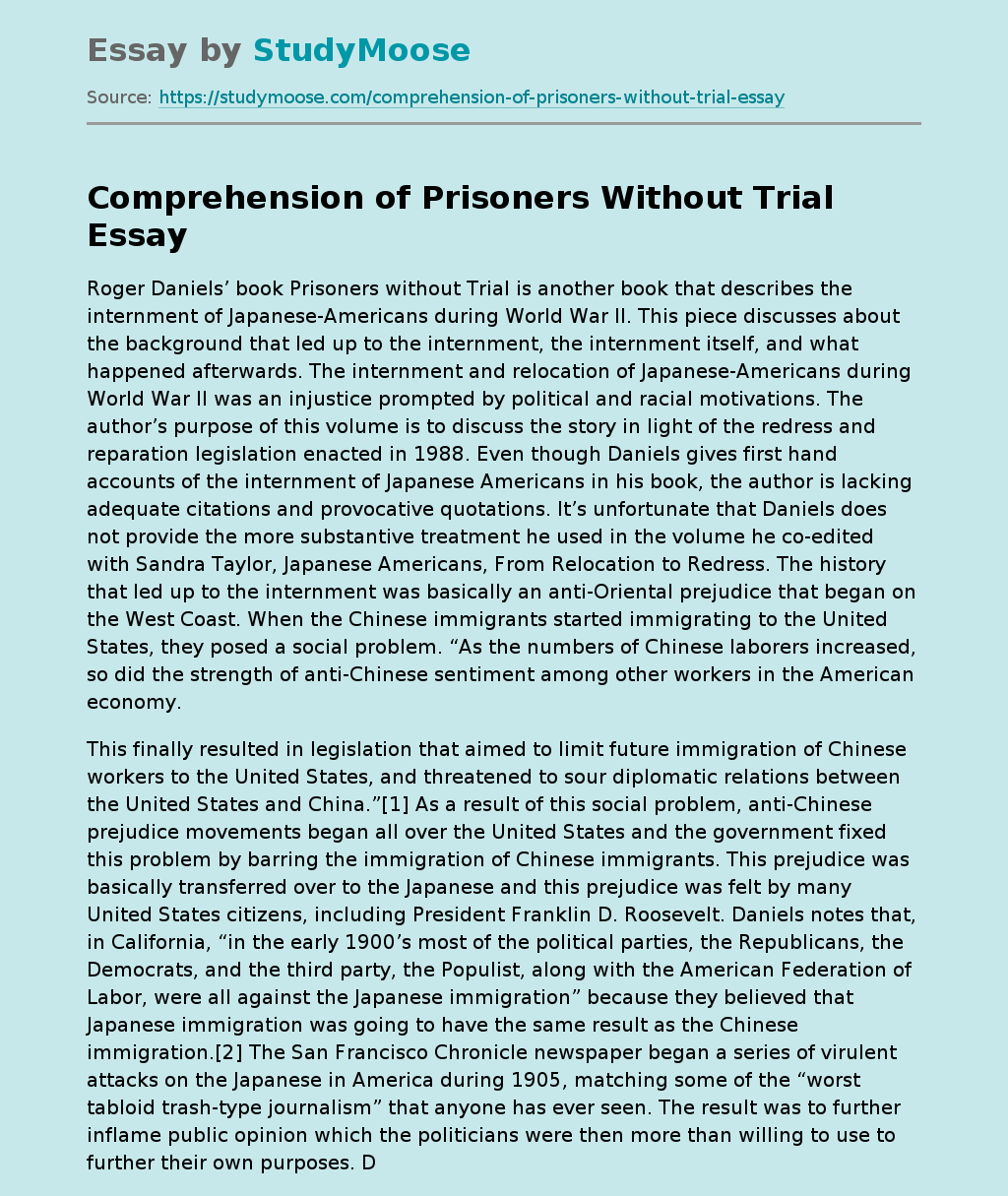