the inner space – sleeping space at the back, then eating space, and then cooking space.

“During my first two months in Gerai, while living with a household in its longhouse apartment, I was unable to understand why my hostess was constantly engaged in talk with no one. She would give long descriptions of things that had happened to her during the day, of work that she had to do, of the state of her feelings and so on, all the while standing or sitting alone in her apartment.

Don't use plagiarized sources. Get your custom essay on
“ Composite soundscape of daily life in a Bosavi village, Papua New Guinea ”
Get custom paper
NEW! smart matching with writer

To a Westerner, used to the idea that one’s home stops at its walls, and that interaction beyond these involves a projection of the voice or of the self which makes impossible the continuation of normal domestic chores, her behaviour seemed eccentric, to say the least.

It was only much later, on my second field trip, that I came to realise that the woman’s apparent monologues had always had an audience, and that they were a way of affirming and recreating ties across apartments that made her a part of the longhouse community.

In addition, I recognised with time that she had been responding to questions floating across apartment partitions that I, still bewildered and overwhelmed by the cacophony of sound that characterises longhouse life, had been unable to distinguish”.

Why has she stopped talking?

What do we communicate with silence?

Is the room silent?

Is silence the absence of sound?

Any sound can be communicative

The Power of Silence

Shortly after the wedding of her daughter, our next-door neighbour visited my wife and me. In order to hear what the purpose of her visit was my wife and I invited her to sit down in the living room and we started chatting. At one point the neighbour turned to me and asked how much she owed me for a small favour I had done for her in connection with the wedding. I was genuinely appalled at the question so I did not say anything and just looked peeved at the woman. After a moment, she said, slightly embarrassed, “Czy mam wyskoczyc przrez okno?” (Do you want me to jump out of the window?). I said “Tak” (“Yes”). Then we changed the topic, and after feeding us some fresh neighbourly gossip, she left.

The scene is a small bathroom. It is early morning. A couple is getting ready to go to work. The man is shaving. The woman wants to blow dry her hair in the bathroom

Woman: Am I disturbing you?

Woman: [silence]. She walks out

The “quality of silence”

* silence as some kind of emotional shock

* silence as people not talking

* the silence of defiance, refusal

* the silence of respect

Silence the prerogative of the powerful

Silence as symbol of passivity or powerlessness

The people of Amigo, West Virginia talk their world into being with ceaseless narratives, commentaries.

English Quakers – established in 17th century. God will speak to people who are prepared to sit in silence.

The story of Voice of the Rainforest – told by Steven Feld in the article “From Schizophonia to Schismogenesis: The Discourse and Practices of World Music and World Beat”.

Collaboration with Mickey Hart (drummer of the Grateful Dead), and the Kaluli people of the Bosavi.

World Music – whose world? whose music? 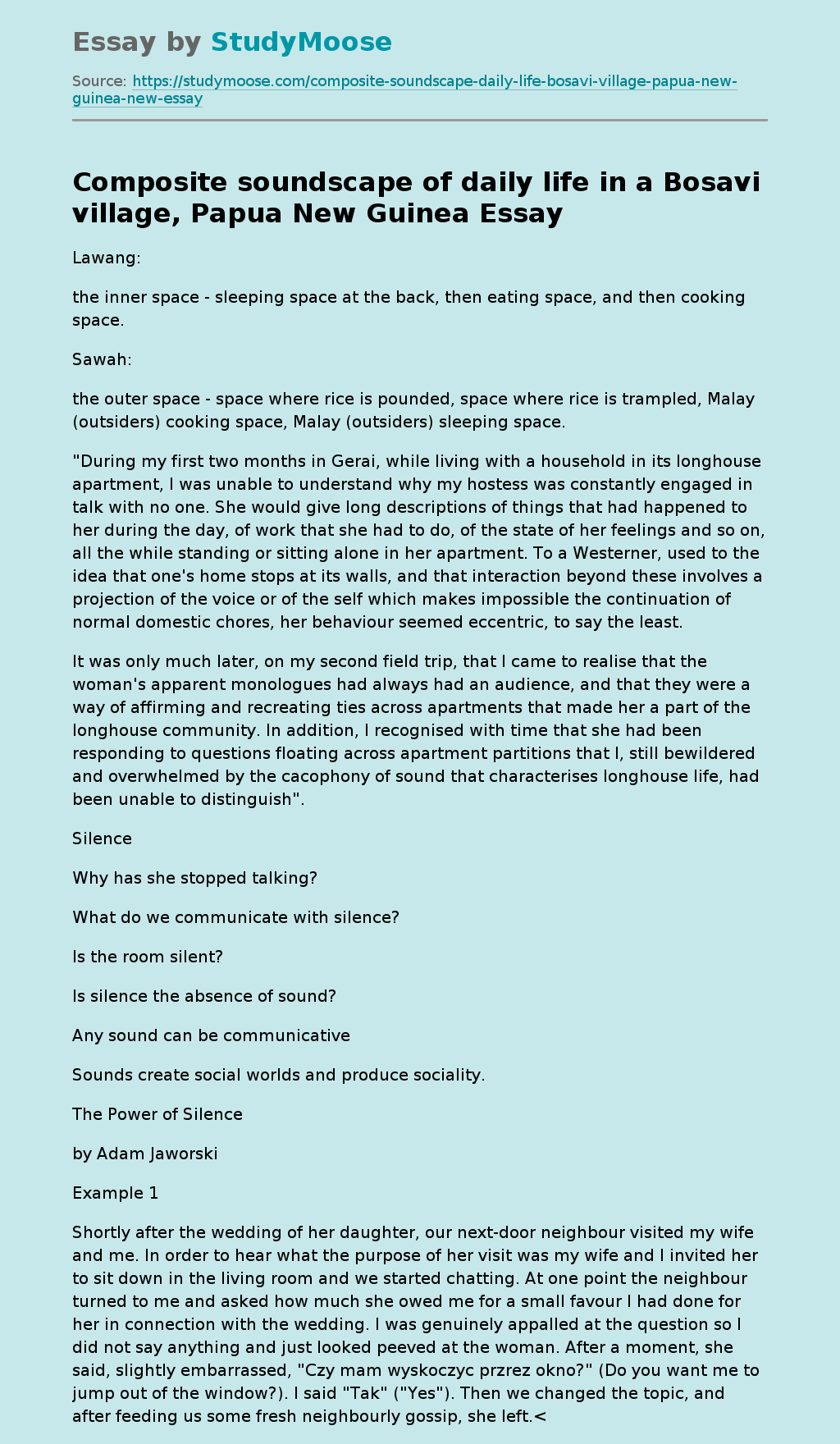