Mass incarceration of African Americans is one of the biggest problems that we as a society face today. Many of our African American men are either in jail, or on parole for crimes that are committed by whites everyday. Police often overlook those crimes when it comes down to whites but they do not for blacks. Hence why a lot of black men are missing from our society and locked away in prisons for years for such minuscule crimes. Yes they have committed a crime and need to be punished, but, at the same time white men are walking around committing the same crime, where is their punishment? Alexander raises these very pertinent points in “The New Jim Crow.

Don't use plagiarized sources. Get your custom essay on
“ Components of Mass Incarceration ”
Get custom paper
NEW! smart matching with writer

” The three components of mass incarceration are denial, mainstream media and historical influence.

Alexander states, “Today most Americans know and don’t know the truth about mass incarceration.”(181). What this means is that as a society Americans are either blinded or oblivious to the fact that there is a lack of education of how mass incarceration affects the African American communities.

In many African American households they are missing father figures due to the fact that they are in jail. As Alexander mentions denial plays a huge roll in this. We know that a large number of African American males are in prison by watching mainstream media but yet we don’t care enough about it. According to Alexander “we tell our self that they deserve it.”(182). Americans have been painted a picture to see African American men as a whole, as criminals especially when it comes to drugs.

When in fact white males are prone to do the exact same crimes and not be targeted by police. Mainstream media helps to greatly contribute to these lies that we are being fed about mass incarceration.

Shows such as “Orange is the New Black” depict a different story. The show focuses on a Caucasian woman who is in jail for soliciting drugs. While she is in jail they show you a very multiracial and diverse group of woman. Shows like these help to contribute to why we believe that prisons are filled with not only blacks but also a wide variety of ethnicities One thing that the show just briefly touches on that Alexander talks about in great lengths is how mass incarceration “traps” African Americans. “Orange is the New Black” showed the viewers in one episode a very “real” side of the prison life when they just slightly touch on the story of a black woman who was released from prison on good behavior and she gets out in to the real world and she has no family, no where to turn and she can not get a job due to her prison record and she ends back up in jail.

When she gets back in jail she screams, “I’m home.” This is exactly what Alexander spends majority of her essay speaking about, she says that we are trapped in a “birdcage.” She says this because no matter how we try to “beat the system” we are always going to be trapped no matter what we try to do. Historical influence has and will always be a part of African American history. As Alexander’s title of her article is “The New Jim Crow.” She feels as if the prison system is another form of Jim Crow laws. Jim Crow laws were established to keep black men down which are exactly what the prison systems are doing according to Alexander. She states “Jim Crow and mass incarceration have political origins.”(190). 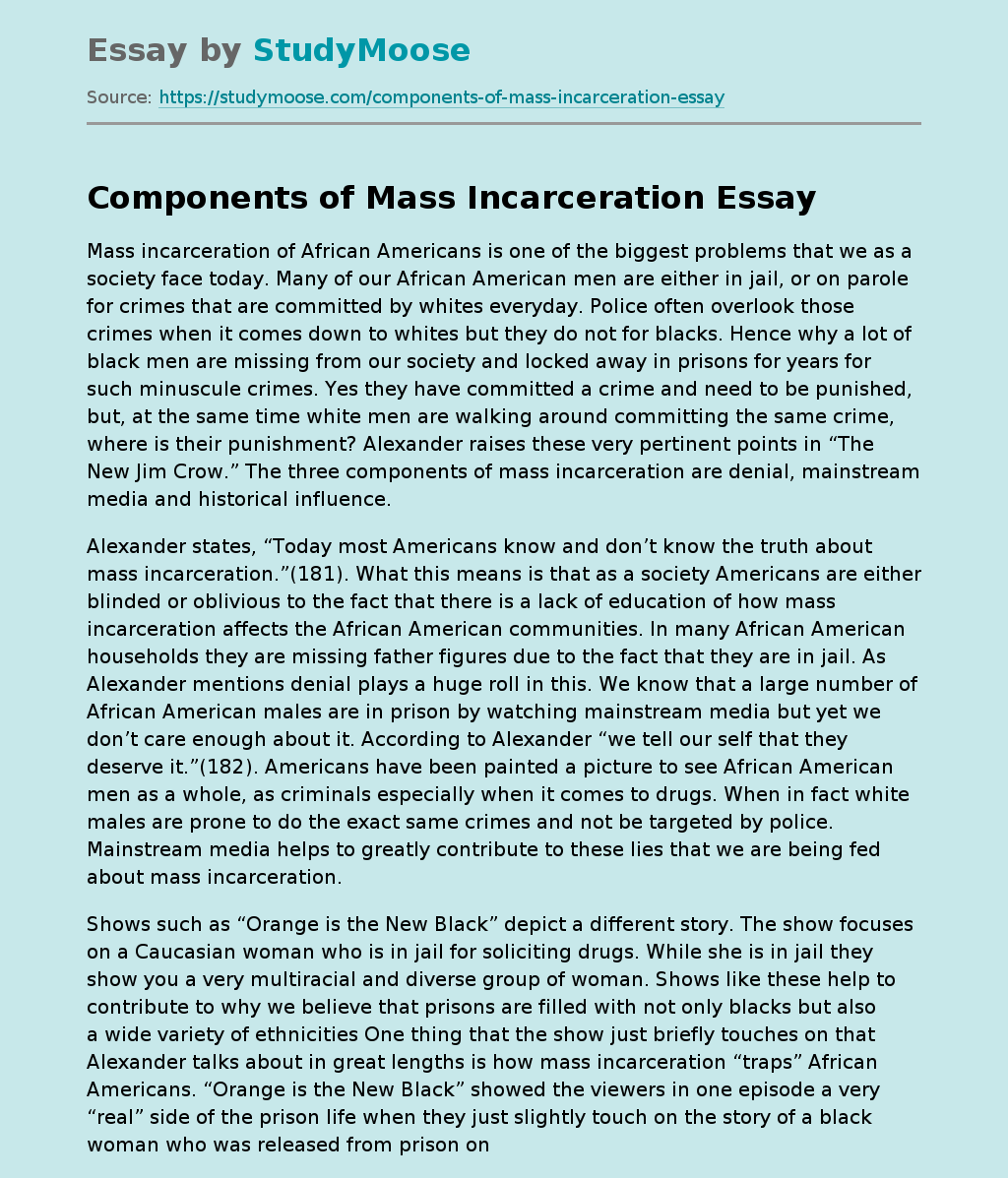