The core meaning of civic education is that it is a subject that promotes civic knowledge, civic skills, civic values and civic dispositions. Civic knowledge is concerned with the content or what citizens out to know, it is thorough familiarization with what civic life constitutes. It is having an understanding about basic principles of democracy, politics, elections, institutions. Having the understanding of the rights and responsibilities, knowledge of what rights and responsibilities our political leaders have. Social relationships in the community entails levels of civic knowledge, an understanding that their different cultures.

Don't use plagiarized sources.
Get Your Custom Essay on Components of civic education Just from $13,9/Page

It is about having an understanding of current issues, the functionality of institutions and sustainable development. Civic skills, with regard to the three positions given on the meaning of civic education it promotes practical skills meaning service learning and common awareness hence for people to discharge their responsibilities and exercise their rights as citizens, the need for skills, participatory and intellectual capabilities becomes paramount. Intellectual skills in civics and government are inseparable from content, these skills are sometimes called thinking skills.

The National Standards of Civics and Government categorize these skills as identifying and describing; explaining and analyzing; and evaluating, taking and defending positions in public affairs. A good civic education enables one to identify or give the meaning or significance of things that are tangible such as the flag, national monuments or civics and political events. It also enables one to give the meaning or significance of intangibles, such as ideals or concepts including patriotism, majority and minority rights, civil society, and constitutionalism. Civic disposition’s refers to the traits of private and public character essential to maintenance and improvement of constitutional democracy. Civic dispositions develop slowly as a result of what one learns and experiences in the home, school, community and organization of civil society.

These experiences include understanding that democracy requires the responsible self governance of each individual; one cannot exist without the other. Traits of private character, such as moral responsibility, self discipline, and respect for the worth and human dignity of every individual are imperative. Traits of public character are public spiritedness, civility, respect for the rule of law, crucial/ critical mindedness and willingness to listen, negotiate and compromise are inseparable to democracy’s success. These bring about the intention to be active in the community, to participate in civil society as well as in particular political community. The importance of civic dispositions, or the “habits of the heart” as Alexis de Tocqueville called them, can scarcely be overemphasized. 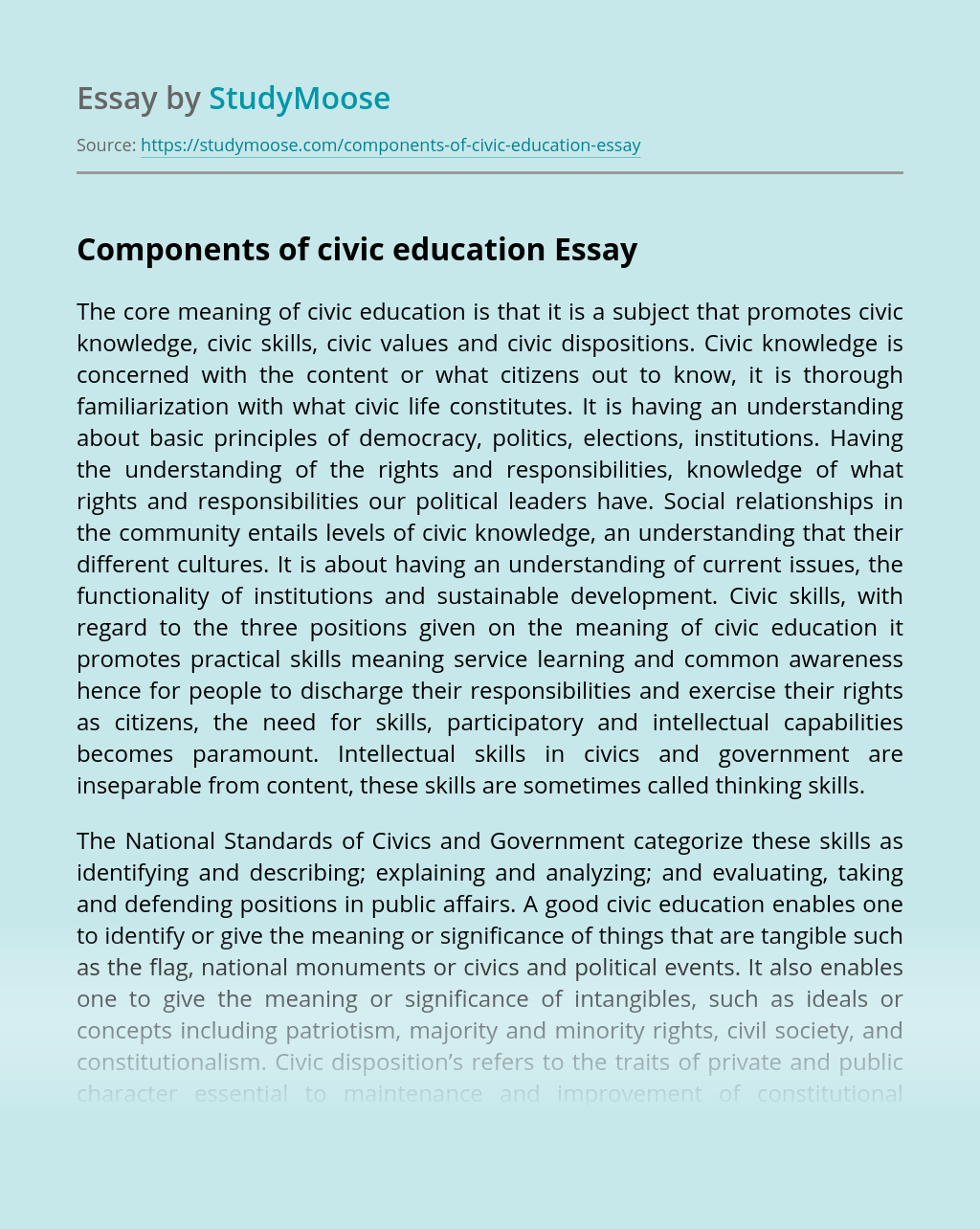 A Critical Analysis Of "The Send Off" By Wilfred Owen

This essay intends to examine the poem “The Send Off” by Wilfred Owen. Owen wrote this poem while he was stationed at Ripon army camp. He was based there after being a patient at the Craiglockhart War Hospital, this is where he met Robert Graves and Siegfried Sassoon. Owen was at Ripon between March and...

View sample
Get Essay
77 Billion People on the Earth

There are approximately 7.7 billion people on the earth (Worldometers.info, 2019) and each person is unique. We each have our own individual identity which defines the person who we are, what interests us, what we believe and what and who we associate with. Psychology Today tells us that identity relates to our basic values that...

The definition of person centred values is treating and seeing people in a care setting as equals, who are involved in decision making to promote an independent way of life and to ensure that the care that is provided is appropriate to their needs. It takes into account service users views and needs and places...

The following essay will analyze the economic, social and political successes and failures of the reconstruction period, after the United States’ civil war. In the presidential elections of 1860, Republicans led by Abraham Lincoln opposed the concept of slavery into United States’ areas. Although Lincoln had won the elections, by March 4, 1861, seven cotton...