Conflicts are typical in people’s everyday lives. Conflicts are inevitable and even healthy when dealt with appropriate circumstances. The theme of conflict has been represented throughout Macbeth and The Kite Runner novel. Macbeth’s play stands out as one of the shortest tragic plays staged on an ambitious conflict of Macbeth’s internality. The play had been produced in various versions since its first production a long time ago. The play is based on a brave Scottish general that receives his prophecy and wracks into his guilt.

Don't use plagiarized sources. Get your custom essay on
“ Compassion & Forgiveness in Macbeth & The Kite Runner ”
Get custom paper
NEW! smart matching with writer

Authored by William Shakespeare, the script of the movie is entirely based on a dramatic tragedy that befalls Macbeth’s throne. The plot of the film is also a hot topic of discussion. There is a strong personal conflict that exists in Macbeth, as well as facing his crime tragedy challenge. The Kite Runner, on the other hand, is a novel based on a real story in Afghanistan done by Khaled Hosseini. The characters’ growth develops similarly from the story of Macbeth.

The novel mentions the conflicts throughout the plot to show its importance in personal growth. It significantly demonstrates the individual values and personal growth as a consequence of conflict is evidence of Macbeth and Lady Macbeth. The conflicts of the couple originate from their desires and ambition against Scotland’s throne of Duncan. This is an example of man versus man conflict influences the individual values of the characters. Macbeth is dazed by witches’ prophecy that makes him desirable for kingship. Meanwhile, his ruthless wife is determined seducing Macbeth to plot and kill the King of Scotland. After the murder, Macbeth falls into a breakdown that influences his values. The conflict drives the couple to commit an act that impacts on their values as well as their relationship.

Shakespeare also portrays the relationship between conflict, individual values, and personal growth through the personal influence of the murder that Macbeth and his wife committed. The conflicting act of murdering King Duncan impacts on the values of Macbeth and his wife as a couple. The consequence of the act prompts a series of conflicts that influence their personal and interpersonal growth. Macbeth starts to experience loneliness as his wife becomes distressed over the murderous act. These conflicts agitate Macbeth and arouse a profound suspicion that leads him to commit a sequence of killings in an attempt to safeguard his throne. As a result, Macbeth is consumed by constant guilt that surfaces when Banquo’s ghost appears. These series of conflicts are seen to strengthen his ambitions, but also diminishing the values that present him as an admirable hero.

Equally, the theme of conflict and individual values has been well portrayed in The Kite Runner by Khaled Hosseini. He presents the theme through Amir’s journey; a man looks for redemption for his guilt haunt in the past. The author accounts for the conflicts that influence individual values throughout Amir experiences. For instance, Hosseini uses Amir’s conflicted childhood to show man versus man conflict that influences an individual’s values and aspects such as jealousy, shame, guilt, and longing for redemption. The conflict between Amir, Baba, and Hassan triggers Amir’s jealousy and hate towards Hassan. As a result, Amir dislikes and does not treat Hassan well whenever he gets an opportunity. He allows his racist friend to assault Hassan sexually. This conflict impacts Amir’s personal values due to feelings of guilt after betraying his half-brother, causing him great distress and shame that haunts him to adulthood. This conflict greatly impacts on Amir’s personal growth. His values tend to strengthen as he constantly tries to redeem himself from the guilty conscience. He even travels from the United States to help Hassan’s son along his pathway after discovering Hassan’s death.

Additionally, the theme of conflict primarily influence individual values and personal growth is developed through a man versus man conflict between Amir and his father. Amir yearns for his father’s recognition and affection as a son. However, his father seems quite distant due to various reasons, it raises a conflict of interest in Amir which greatly impacts on his values and personal growth. For instance, when Amir hears his father comment that “…something about Amir troubles me in a way that I can’t express. It’s like…If I hadn’t seen the doctor pull him out of my wife with my own eyes, I’d never believed he’s my son”. It intensifies his inner conflicts. It confirms his worst fears that subjects Amir to please his father and gain his love, which greatly influences his values and personal growth, as well as the view of the world around him.

Conflict triggers an inner struggle that shapes personal growth. In Shakespeare and Hosseini novels, they present conflicts as influences of characters’ inner thoughts, conscience, and personality through the numerous inner struggles. Internal conflicts of individuals influence their psychological growth, as well as interpersonal relationships. These impacts on an individual’s choices and decisions, predominantly influencing personal growth. In Macbeth, Shakespeare showcases this theme through the conflicting inner selves of Macbeth and his wife. After murdering King Duncan, Macbeth and his wife are subjected to inner conflict with themselves. For instance, the influential personality of Macbeth’s wife starts to crumble. The inner conflict torments the wife until she commits suicide. This incident leaves Macbeth to suffer mentally as he is left all alone. This internal turmoil links to their preceding conflicts, resulting in guilt that leads themselves to downfall.
Also, the influence of inner conflict to personal growth is shown through Macbeth’s stereotypical nature. As his ambition starts to grow, Macbeth branches himself toward dreadful acts, and begins to disdain, and challenge his destiny. This conflict influences his personal growth in ways that are observable every time he commits murder. The continuous murders diminished his human self. According to Shakespeare, the conflict makes Macbeth fluctuate from one mental state to another until he becomes unsure of what is real and ‘what is not’.

Likewise, Hosseini in his novel, The Kite Runner, showcases the conflict with self as a major influence of personal growth. For example, Hosseini describes Amir’s conflicts with his life as an inner struggle that persisted to adulthood. Amir develops guilt and self-blame as a result of an inner conflict regarding his mother’s death during childbirth. Although death was an incident beyond his control, an inner conflict consumes him as a result of his father’s unresponsiveness towards him. This conflict forces him to counterfeit his interest in sports to please his father to please him and satisfy his desire for parental regard. This journey that Amir takes as an individual demonstrates the impact of his inner conflicts on his lifelong personal growth. 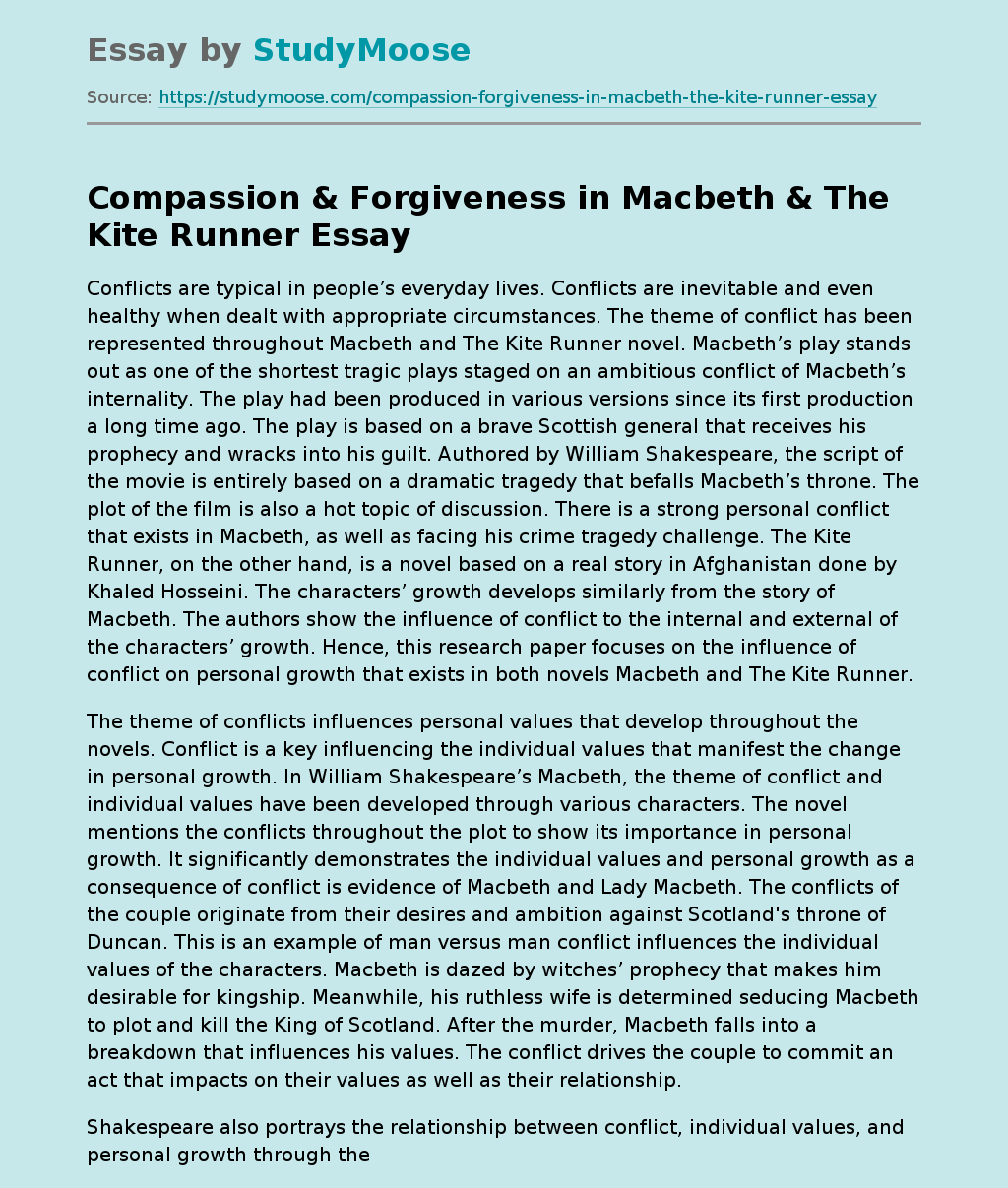