Araby is a story about a young boy who has an intense attraction to this girl. He goes out of his way to watch her every morning, and eventually talks to her. She says how she wants to go to the bazaar but cannot due to the fact that she’s going away on some church related trip. He wants nothing more than to impress this girl so he offers to travel to the bazaar himself and get her something. His uncle is late returning home on the day the boy is to go shop, so the boy ends up having to pay more to get into the bazaar.

Don't use plagiarized sources. Get your custom essay on
“ Comparisons Between Boy Behavior in Two Stories ”
Get custom paper
NEW! smart matching with writer

After looking around for a while, a lady that works there asks if he is interested in anything, and he responds saying no. As he turns to leave, the bazaar is beginning to close for the night, the light shuts off on him as he walks back to return home. A&P is a story about a boy names Sammie who works in a supermarket.

In this story Sammie is telling the readers what he sees with an elaborate devotion to detail. One day while he is working, three girls walk in with swimsuits on. He is shown to have some sort of instant attraction to one of the girls.

He sees the most attractive girl to be the leader of the three nicknaming her “Queenie”, and while he goes in to detail of how beautiful her features are, he tells of how her “followers” were chubby and unattractive.

When Sammie’s manager spots the girls, he scolds them about their attire. Sammie wanting to come to the rescue of the girls quits. His manager is a friend of his parents and tells him he is making a mistake, but Sammie doesn’t care. He walks out the store hoping to see “his” girls, but when they are nowhere in sight he realizes he’s made a mistake that was foolish.

In these stories Araby by James Joyce and A&P by John Updike, there are many similarities and at the same time, these stories contain many differences. One of the many similarities between these two stories is that both these boys are seriously intrigued with someone of the opposite sex. While they go in to detail on the appearance of the girls they are interested in, they never give a name. This can be seen as the boys being obsessed with the female species. Another trait these boys share would have to be that they will go out of their way to impress these girls.

The boy in Araby offers to go to the bazaar to spend his own money and purchase her a gift. Sammie tries to impress the girls by quitting his job. He feels as if he is defending their honor. Another similarity between these two boys is they failed in impressing the girls in their stories. Sammie quits then goes outside to look for the three girls that he quit for, but they were nowhere in sight. After discovering that they are not outside he feels regret, not only for quitting his job and not impressing the girls like he intended to do, but because he let his manager and parents down, and realized how foolish and rash his decision was.

The boy in the Araby story felt foolish after he went out his way to go to the bazaar for this girl, and ended up paying just to leave empty-handed. When the lights turned off on him as he was walking out made it seem as if he was taking a walk of shame. He felt unwise because he was blinded by beauty and wasn’t using his brain. Just as there similarities, there are differences between the two stories Araby and A&P. One difference between the two stories is that in A&P when religion was spoken about it was mentioned briefly. In Araby, religion was mentioned a lot, and whenever it was mentioned it was usually in a negative way.

In A&P Sammie mentions how his manager works in the church and has many jobs. In Araby the first time they mention religion, they mention the death of the boy’s family’s tenant, who was a priest. Another difference between these stories is that the boy in Araby only described the girl as being a beautiful object, while Sammie made the girl in his story seem more like a sexual object. Sammie made observations on how her top strap would hang off her shoulder, making her look naked from the neck down to her shoulder. The boy in Araby made comments on how graceful the girl in his story’s hair was. 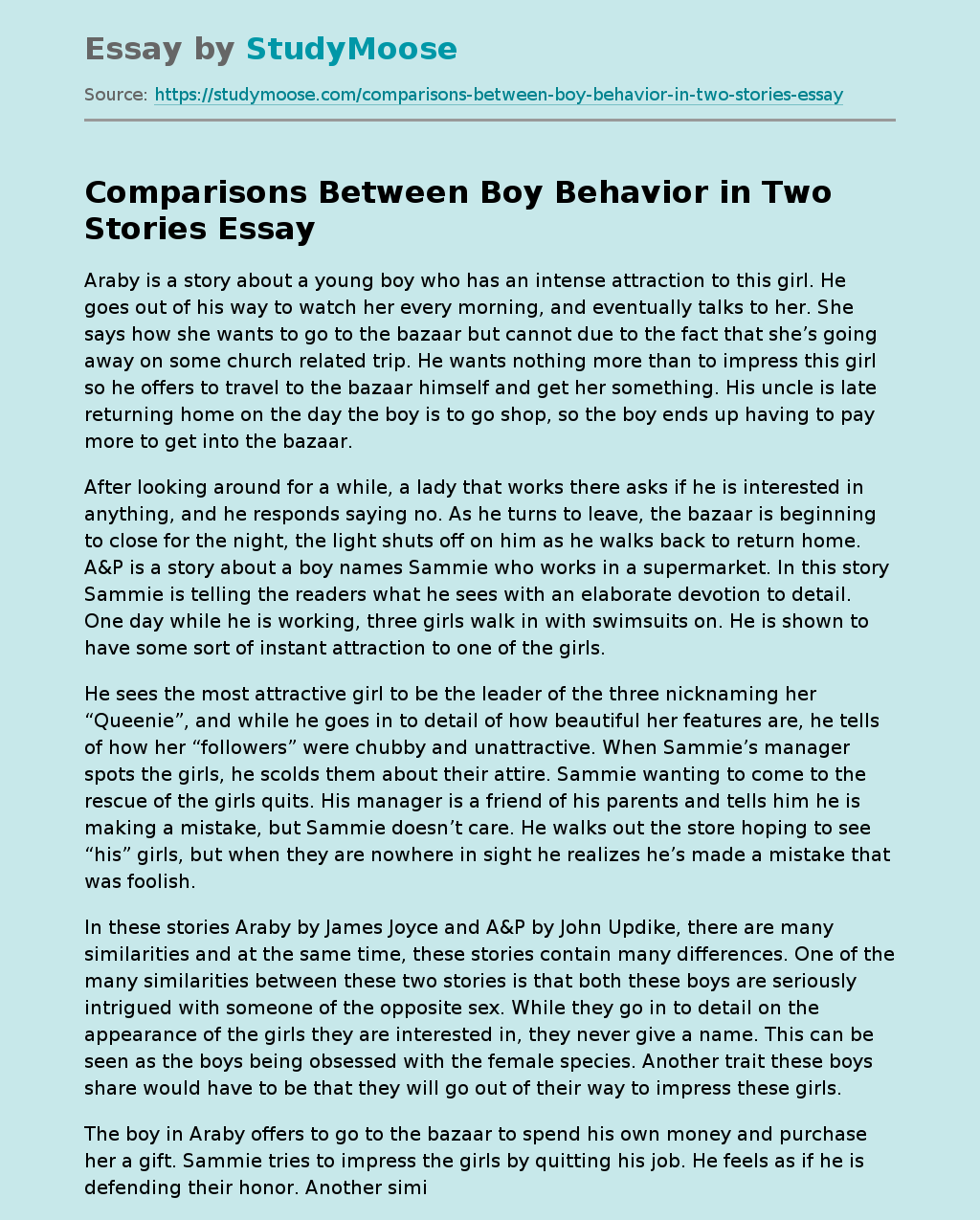