In the late 1970’s a new killer was born, and his name was Dracula. Between his smooth interactions with the ladies and his large home this is one killer who knows how to bring his food to him. He made sure everyone remembers his name but never what happened that night when his victim and him was alone. Twenty-nine years later the kid version of this number one horror Dracula came along Twilight about a group of vampires that tries to blend in with the rest of the world, but love took over and now they will have to choose between love and family.

Don't use plagiarized sources. Get your custom essay on
“ Comparison of Vampire Stories: Dracula vs Twilight ”
Get custom paper
NEW! smart matching with writer

Although, the movies are different they’re both somewhat alike for an example both novels have the element of love and preserving it.In Dracula he is able to take different forms, and can also walk on walls. And while characters in Twilight have special abilities, they don’t have this one.

While in contrast Dracula doesn’t have the special abilities that they have.

Both have superhuman characteristics being the first being superhuman strength. Also the vampires in twilight appear young for the rest of the their life, while in Dracula it does not specify (but I’m assuming not). While in contrast Dracula doesn’t have the special abilities that they have. In Dracula, Jonathan goes after Mina to try and save her in the name of love. While in Twilight Edward ruthlessly tries to protect Bella in the name of love as well. Overall completing Gothic literature in having a female heroine.

seen in blood lust in both books, as well as both having the element of the obsession of love. Also, these two do share the same characteristics such as both characters (vampires) have pale skin, as well as it being described as ‘cold as ice’ when touched, both obviously suck blood, but the vampires in Twilight have more self-control some choosing to only drink the blood of animals. Both are uncomfortable in sunlight, but for different reasons. Lure – Dracula lures his victims as he is essentially evil. And while there are vampires like this in Twilight, many don’t want to get into relationships in fear of hurting humans.

Continuing in Dracula vampires are inherently evil, and there is no in between, they symbolize everything outside of the Victorian lifestyle. While in Twilight there are again both and good vampires. There are also different things to look at in these movies far as the setting for an example In Twilight vampires are not allowed to go into daylight without exposing themselves for what they are. While in Dracula, vampires can go into the sun, but their powers are limited. In Twilight vampires are much more glamorous, they are described as perfect and flawless in their entire physical appearance. While Dracula was not as attractive with sharp fingernails, hairy, and overall just made people feel uncomfortable. Also, in Dracula there is a historical Victorian setting and is much more relevant to Gothic Literature than Twilight is. While in Twilight it is current, and in pop culture, especially shown in its audience which is mainly teenagers. Evil- Dracula and all vampires within the novel are evil baby blood sucking monsters. While in Twilight there is two different perceptions about them.

During Dracula’s time the Victorian era was in full flight, and the novel definitely does not glamorize people who went against this lifestyle. While in Twilight they do glamorize vampires, as some trying to protect humans, and looking flawless while doing it. One could see this in Dracula, as Mina is saved, because she is the good Victorian role model and takes care of her husband. While her friend does not, representing what happens to the bad Victorian image. 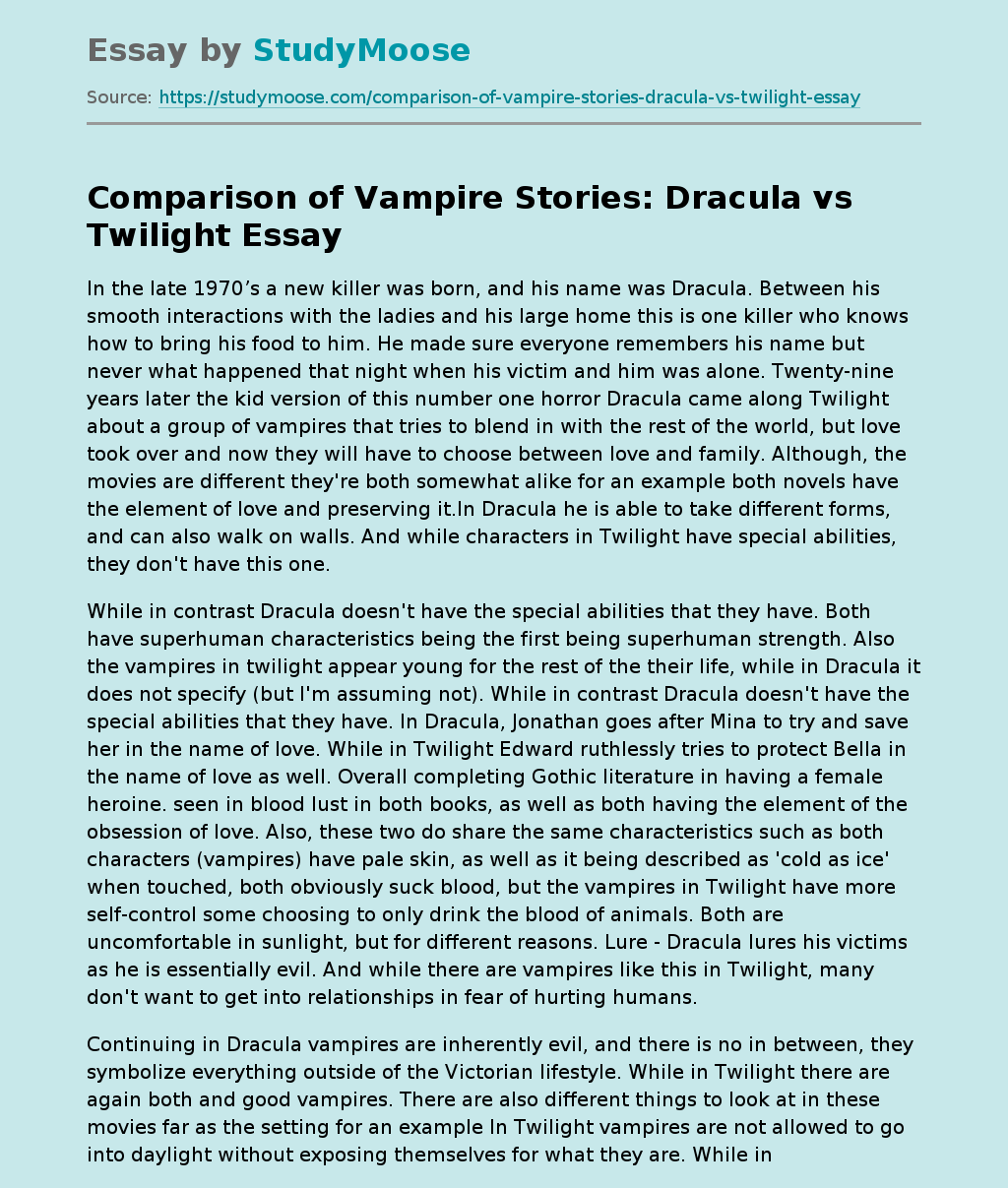