The “Tell-Tale Heart” and “The Black Cat” are two short stories written by the author Edgar Allan Poe respectively in 1843 and 1845. The two short stories which are characterized by a gothic and mysterious atmosphere has a very similar plot setting, but how do you differ the reason for killing an old innocent man(TTH), and a sudden hanging of the cat that you used to love(BC)? Poe gives a unique opportunity to analyze the way of human behavior through his short stories, where you as a reader have to study the minds of insane individuals who claim to be sane.

Don't use plagiarized sources. Get your custom essay on
“ Comparison of Two Poe’s Short Stories ”
Get custom paper
NEW! smart matching with writer

The atmosphere of Poe’s two shorty stories indicates a lot of fear, which makes the tension rise as the timeline develops.

This is seen in both stories, even though we have one big difference regarding the order of the events; in the “Tell-Tale Heart” our starting point is in a prison or in a mental health center most likely, where the protagonist recounts the preceding actions, which has led him to the place he is now.

This means that we know the whole plot of the story. This flashback-like telling technique makes the reader focus more on aspects we normally consider less important; why does the heartbeat get louder and louder? “[…] the noise arose over all and continually increased. It grew louder – louder – louder!”(P. 158 l. 9-10). These dark and odd aspects are quite important in the “Tell-Tale Heart”, not only because they make the story more exciting and thrilling by the anaphors for instance, but also because it leads us toward a more “right” comprehension of the protagonists` behavior; how and why is he driven to his state of mind?

Poe’s way of writing makes the tension rise a lot towards the end.

It almost feels like the text is speeding up for the reader because of the action-packed ending containing all of these repetitions and exclamation marks. Furthermore is the monologue also a central factor in both short stories affecting the atmosphere, because the protagonists enrage themselves more and more. No other individuals tries to calm them down in any way, ask how they are etc. Especially this makes them seem even crazier.

In “The Black Cat” is the atmosphere also dark and frightening, but not exactly in the same way though. In contrast to the “Tell-Tale Heart” are the smaller effects not that important in “The Black Cat”. The atmosphere is more affected directly by the protagonist whose mood seems to be changing a lot through the story. The atmosphere appears almost idyllic in the beginning when the narrator tells us about this love for animals: “I was especially fond of animals, and was indulged by my parents with a great variety of pets.

With these I spent most of my time, and never was so happy as when feeding and caressing them.” (P. 1 l. 21-23), but as the protagonist starts to go out and drink he gets more and more irritable. It seems like he is aware of the changing, but he finds himself unable to reverse it somehow. The answer for this might very well be the alcohol, which gives the atmosphere a huge twist as the protagonists’ senses are attenuated and he catches the wrong impressions of his formerly loved cat Pluto: “One night, returning home, much intoxicated, from one of my haunts about town, I fancied that the cat avoided my presence.” (P. 2 l. 55-56). The negative side effects of the alcohol withdraw a condition influenced by paranoia for the protagonist.

Poe has an unusual way of building up a fearful; more likely a disgusting atmosphere around hobbies containing good moral and mutual pleasure; caretaking of an old man and petting a loyal cat – not really the things we would consider evil. He does this deliberately to make the reader focus more on the protagonist’s personalities: Why would anyone hang a sweet cat or a kill an old man? The relationships are turned upside down; your friends become your enemies.

If we take a closer look on the spectacular personalities we most likely indirectly make an interpretation of the protagonists who are defending their extreme behavior. This is specifically seen in the “Tell-Tale Heart”, wherein the protagonist tries to argue for his actions several times: “And have I not told you what you mistake for madness is but over-acuteness of the senses?” (P. 156 l. 27-28). The denial of the madness almost appear logic to some individuals perhaps, but you do not call it mitigating circumstances what so ever if an individual can hear the heart pounding of a dead man. This is in fact the biggest difference between the two men – the protagonist in the “Tell-Tale Heart” could as well be a woman, but he says: “You fancy me mad. Madmen know nothing.” (P. 155 L. 3).

For that reason we assume the individual is a man; a man who has planned his murder for about a week. In contrast to this has the protagonist in “The Black Cat” not planned his murderous actions at all, but carries them out in blind rage. Besides this does the two protagonists have a lot in common regarding the narration especially. They both seem unreliable; they cannot be completely accurate with everything that happened in the past, particularly the narrator in “The Black Cat” since he was intoxicated by alcohol most of the time.

Both titles say a lot about the narrators as well.

The title in the “Tell-Tale Heart” can be put in relation to the narrator and his own heart, because he can’t bare his own actions at last and we think that it is in fact his own heart that pounds so hard in the end of the story due to the feeling of guiltiness. This applies equally in the other short story, wherein the man is suppressed by guiltiness in the end and suddenly kills his lovely wife. Furthermore is the thematic subject almost the same as the title interpretation; the human heart cannot bare such guiltoutwardly they both seem very confident when the police searches the house, but the inside is the guilt-feeling increasing, which reveals the protagonist’s evil acts in the end.

Poe masters the gothic genre very well by creating this fearful environment; even making the home a frightening place in the “Tell-Tale Heart”, whereas he makes irrational pets rational and makes the narrators irrational murdersrelationship turned upside down again, this time regarding outwardly behavior. He changes the abilities of human nature in the big whole, which makes the stories a bit hard to analyze and therefore we must as reader think like a psychologist to obtain a slightly right comprehension of the unique stories.

Comparison of Two Poe's Short Stories. (2016, May 02). Retrieved from https://studymoose.com/comparison-of-two-poes-short-stories-essay?post 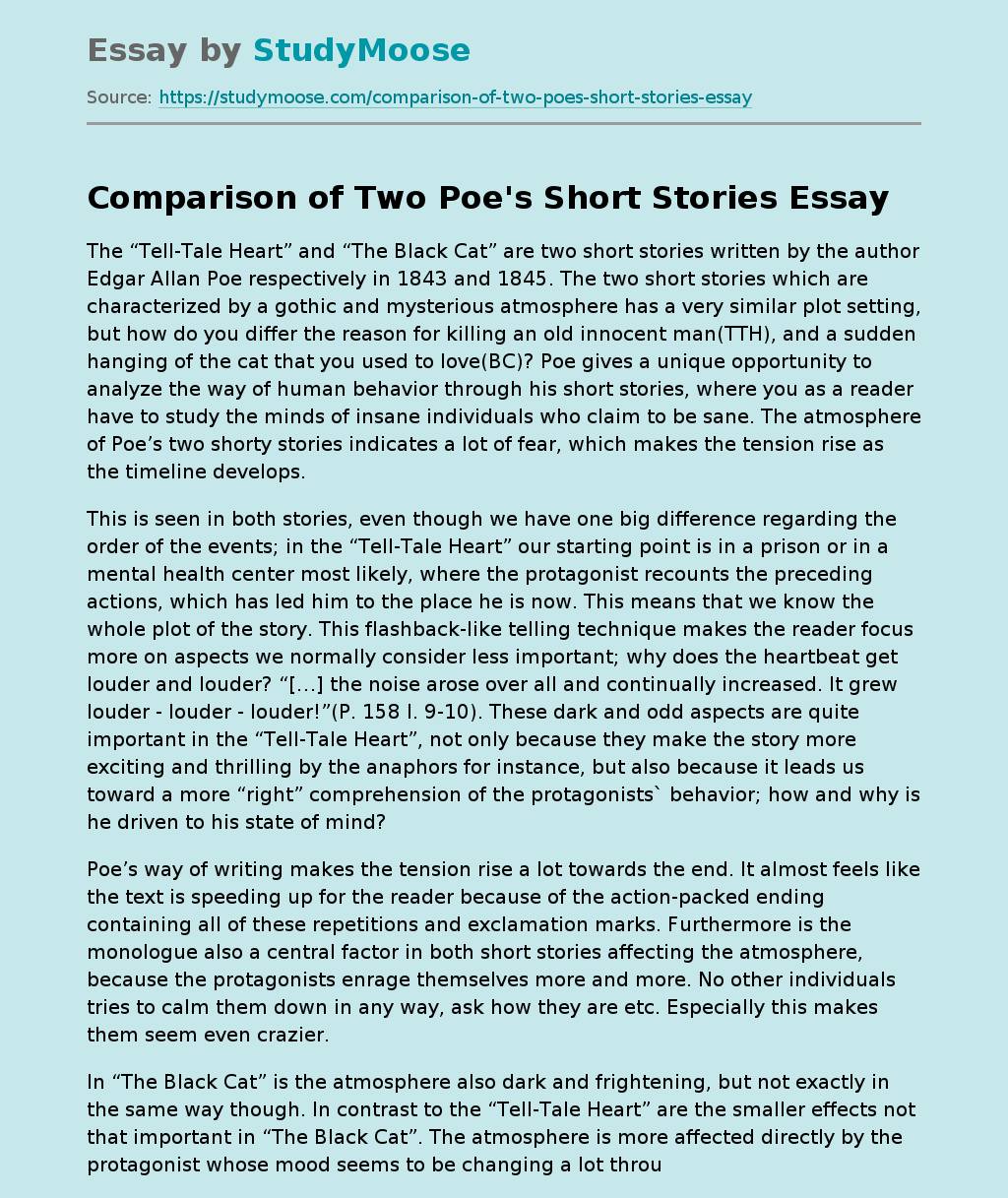