Comparison of the Death Penalty: China vs United States

The United States of America is one of the few countries that still impose death sentences regularly. The People’s Republic of China is also one of these countries. Both are similar in that they are among the top executing countries in the world. Yet they differ in many ways such as, types of crimes that are death penalty eligible, the number of people that are executed, trial processes, and methods of execution.

I consider these to be the biggest differences between The People’s Republic of China and the United States of America.

Don't use plagiarized sources. Get your custom essay on
“ Comparison of the Death Penalty: China vs United States ”
Get custom paper
NEW! smart matching with writer

One of the most shocking things I came across when researching was the wide range of crimes punishable by death in China. The most shocking of which, is those of non-violent nature. A type of non-violent crime that is routinely charged as a capital crime is economic or “white-collar” crimes. In China’s Criminal Law, there are specific instances where economic crimes can be charged as capital crimes.

In the article, “On Limiting and Abolishing the Death Penalty for Economic Crimes in China”, the author Bingzhi Zhao wrote, “it is normally specified in China’s Criminal Law that the death penalty is only applicable when the crime is ‘of a particularly enormous amount’ or ‘of a particularly severe nature’”1. A “particularly enormous amount” or “of a particularly sever nature” refers to the amount of money stolen or number of people “hurt” by the crime. What I consider to be a great parallel would be Bernie Madoff, who stole billions from investors and was sentences to 150 years in jail, which is the maximum sentence he could receive2.

This leads me to believe if Bernie Madoff lived in China, he would’ve been executed. Although his crimes were particularly extreme in the amount of money he stole, he was not violent in any way shape or form. In America this simply has not happened in the last century. It is my personal belief that crimes other than murder shouldn’t be capital crimes, but I think it is plain wrong for a “white-collar” crime to be charged as a capital crime. There are even accounts of drug dealers and people who fund-raise illegal3.

I personally know somebody arrested for dealing drugs, if he received a death sentence for his crime, it would be completely and utterly shocking. It is my belief that a non-violent crime shouldn’t be punished in a violent way. The People’s Republic of China use of capital punishment is shrouded in secrecy. In an article in the Washington Post, the author(s) writes, “The Chinese government has a long-standing policy of not commenting on the death penalty and keeps the number of executions secret”3. This rings true because it is impossible to find a true figure for executions in China.

Figures of Executions in China

With populations of 1. 3 billion and 310 million (estimates), respectively, China executed at least 1 out of every 750,000, and the United States of America executed about 1 out of every 8,375,000 people. This adds up to China executing about 11 times as many people per capita than the United States. One must also keep in mind that the figure of China executing 1,718 is also the “at least” number; the Dui Hua foundation estimated 5,000-6,000 executions in one year alone.

If China indeed executed 5,000, this would raise their per capita execution rate three times higher, to 33 times more executions per capita than America. While there are countries who execute more than the United States of America besides China, they aren’t countries that America would like to be placed with. In descending order the ten countries with the highest executions are, China, Iran, Saudi Arabia, the United States, Pakistan, Iraq, Vietnam, Afghanistan, North Korea, and Japan4.

Interestingly enough, American soldiers have fought wars within the borders of six out of nine of these countries since World War II. The United States of America and China are the two most powerful countries in the world right now, yet they are in a list with the likes of under-developed countries like Iran, Iraq, Afghanistan, and Saudi Arabia. China kills enormous amounts of people as compared to every other country, and they also do so in a manner that the American Criminal Justice system would consider extremely unconstitutional.

In the United States we use grand juries and/or preliminary hearings as a screening device to make sure there is enough evidence to go to trial, whereas in the People’s Republic of China, there is one person, called a Procurator, who screens cases5. This causes the decision to go to trial extremely unfair, because the standard of evidence in China is “sufficient” as opposed to American standard of “beyond a reasonable doubt”. Also in the case of a grand jury, there has to be more than one person agreeing the case can go to trial, whereas in China, just one person decides whether a case is trial worthy.

The largest difference between the two countries processes however, is not the use or lack thereof grand juries, but the difference lies in how trials are conducted. China uses the Inquisitorial Model, where a judge dominates the questioning and debating, and a panel of judges, not regular citizens, decides facts and applies the laws5. This could either seem like a terrible idea, or a great idea. Keeping the same group of judges instead of a jury, there is a sense of consistency.

There is no unfair jury selection like in the American system that can usually be based on picking people of certain races who are more likely to convict somebody of a certain race based on statistics. Yet at the same time, these men are judges and see all sorts of criminals, and are very likely to think that anybody arrested, is arrested for a just reason. These judges are also more likely to impose the law harshly, since they are government officials of a country whose government is known to violate numerous human rights.

Differences in the Appeals Process and ‘Failings’

Another huge difference between the two nations lies within the appeals process. In China, not only can the accused appeal, but the Procurator can appeal as well if he or she feels that the sentencing wasn’t done correctly. The accused is only given 10 days to initially file an appeal. If the accused appeals and loses, his sentence can only be lessened, but if a Procurator appeals, the sentence can be made more severe. In the United States, only the accused may appeal, the prosecutor is unable5. This process of Procurators appealing could never happen in the United States, based on the Fifth Amendment.

It would be considered “Double Jeopardy”, since even if a court (aside from the Supreme People’s Court) finds him innocent, the procurator may appeal for a new trial. All of these difference cause many more injustices in China than America. There are even more injustices in the Chinese system. Amnesty International states, “In China those facing capital charges do not receive fair trials. Failings include the lack of prompt access to lawyers, a lack of presumption of innocence, political interference in the judiciary and failure to exclude evidence extracted through torture”6.

These “failings” pose a particular issue in China. One of the mentioned “failings” is lack of presumption of innocence. When a person in China is arrested, they are presumed guilty, and therefore a trial is almost only to prove his innocence, whereas in America we presume innocent until proven guilty and in trials, the prosecutor must prove guilt. Another “failing” is if the accused doesn’t get access to a lawyer quick enough, he could be put to death very rapidly because after a death sentence is approved; the execution is carried out within 7 days7.

The United States of America has long stays on death row, which take a lot of effect out of the execution, but also gives the accused time to appeal, and file all sorts of motions and requests for clemency. Amnesty International also states that China uses information that is extracted through torture. While in the United States this does happen, it is never done so legally, and if a judge finds evidence was extracted through torture, that evidence in unusable.

These factors; lack of access lawyers, unfair trial processes, and lack of presumption of innocence, all cause China’s capital punishment statutes to seem extremely unjust and I would think that quite often even Chinese citizens are unsure of the reliability of their own system, but then I remember that a lot of what the government does is shrouded in secrecy so citizens don’t really know. The general method of execution in The People’s Republic of China is single gunshot to the head. Although China officially uses Lethal Injection as an option, it is still not used as much as gunshot to the head.

An article in USA Today about methods of execution states, “Prior to 1997, China’s main form of execution was shooting. According to a 1998 report from Amnesty International, the Chinese press reported 24 lethal-injection executions in that year, but the exact number is unknown”8. This quote to me shows, that they have started to use lethal injection, but one must remember that China regularly executes well over 1000 people, so 24 by lethal injection is a start, but not nearly a majority whereas in America lethal Injection is the main method.

Under post-Furman statutes there have been 1,070 executions in the United States. 01 of these executions were by lethal injection, followed by 153 of them by electrocution9. Lethal Injection accounts for 84. 2% of American executions (American Statistics were as of April 12, 2007) whereas Lethal Injection in China only accounted for at most, 2. 5% in 1998. These figures may be from different years but 2. 5% versus 84. 2% is a huge difference. The reason China would use gunshot to the head, in my opinion, is it saves money. The Chinese trial and appeals process, which is very fast in nature, saves money compared to the long and drawn out American process.

Add to that figure that executions are carried out within 7 days of sentencing10. The Chinese definitely spend nowhere near the figures that Americans spend on Death Row, since Chinese executions occur in less than 7 days post-sentencing. Although I am just speculating on cost savings since these figures cannot be found due to China’s secrecy on the subject of capital punishment. I think there is much to learn from the Chinese system when it comes to saving money and efficiency, although I strongly disagree with their lack of rights for defendants.

While the differences outlined in this paper are not the only ones, they are the differences that I felt really separate the American and Chinese use of capital punishment. While the American government wastes tons of money on capital punishment, I think our higher standard of evidence and longer proceedings allow us to be surer that the right person is being executed, and although our system has many issues, I still would stand behind it over the system used in The People’s Republic of China.

Comparison of the Death Penalty: China vs United States. (2016, Dec 31). Retrieved from https://studymoose.com/comparison-of-the-death-penalty-china-vs-united-states-essay 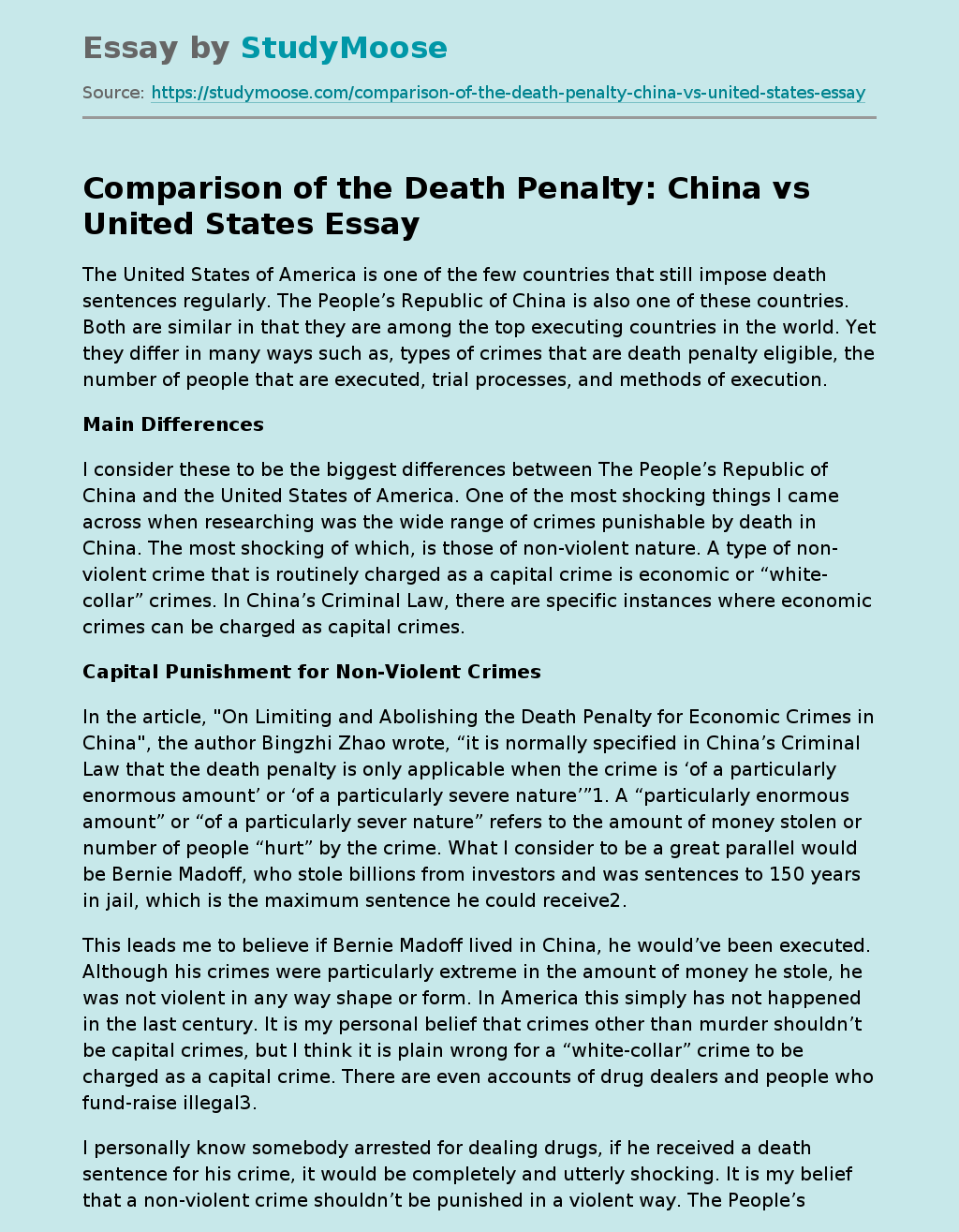