Comparison of Roman and American slavery

Slavery is one of the most common entities between the Roman’s society and the Western society in the late 1800’s. Both civilizations have many differences and similarities between their views on slavery, treatments of the slaves, and economics of slavery. Such similarities include the imprisonment of slaves, the cruel treatments towards slaves, and the legal status of slaves as their owner’s property. However, despite the many differences, slavery between polar societies always has its differences. These differences include the rights of the slaves, the slave’s origins, and the payment of the slaves.

Turn in your highest-quality paper
Get a qualified writer to help you with
“ Comparison of Roman and American slavery ”
Get high-quality paper
NEW! AI matching with writer

Through the comparison of slavery present in Western society of the later 1800’s and Roman society, several astonishing similarities and differences become apparent, especially when considering the movie, “Sparticus”.

The astonishing amount of similarities between the slavery in Roman society and the slavery in Western society show the great importance of slavery to one’s populace. In both society’s, the slave was the basic unit of society, for all of the agricultural market rested upon their shoulders.

Just as cotton was the staple crop of the United States, wheat was the fundamental crop in Roman society, both of which are cultivated by slaves. In both societies, owning a multitude of slaves showed one’s social status, for if one owned numerous slaves, then they were considered wealthy.

Additionally, the lower class looked down upon the slaves as lower individuals than themselves, treating them like animals through their constant beatings and tiresome work. This work that the slaves had to endure was similar in both societies, for they similarly had to work in the fields for long hours.

A child born of a slave woman was a slave (the legal status of his father being irrelevant) and the property of the slave woman’s owner. Ultimately, the Roman and Western society’s views and actions upon slaves were the same in several ways, yet there will always be differences between the two.

The differences between the Roman and Western treatment and thoughts about slavery seem to be even more immense than the similarities, but you must keep in mind that the two society’s thrived in completely different ages with different circumstances. In Roman society, the slaves were all prisoners of war from various countries and races not just one race like the Western slavery. In United States, the slavery consisted of almost all Africa-American captives who didn’t have any interference with their society before they were beginning to be imprisoned. Another difference is the ability for the Roman slaves to rebel with a large force, while the American slaves only tried to run away. The Roman slaves created large slave armies, while the American slaves only created the secret underground railroad. Just as the Romans gather together large quantities of slaves to create an army, Sparticus similarly was one of Rome’s great heroes who shows the similarities and differences between Roman and Western slavery.

In the movie, “Sparticus”, there are several events which allow the viewer to compare Roman slavery to that of Western slavery. In the movie, the slaves were paid small sums of money for their efforts, as seen when they are able to buy the several fleets of ships. However, in Western slavery, the slaves were seldom paid, because they were considered property of their owner. Furthermore, Roman slaves were trained in specific arts and crafts, such as the slave who Sparticus met that was a singer and magician.

In Western society, on the other hand, the slaves mostly just cooked the meals and worked in the fields. However, the similarity between the two society’s includes the abuse felt by the slaves. In the movie, Sparticus was constantly hit with the wooden paddle and made to fight as a gladiator, just as the American slaves were whipped and hung by their white masters. The movie, “Sparticus”, is an excellent example of the treatment and views of slavery in Roman society, all of which can be compared and contrasted to American slavery.

Comparison of Roman and American slavery. (2016, Jun 27). Retrieved from https://studymoose.com/comparison-of-roman-and-american-slavery-essay 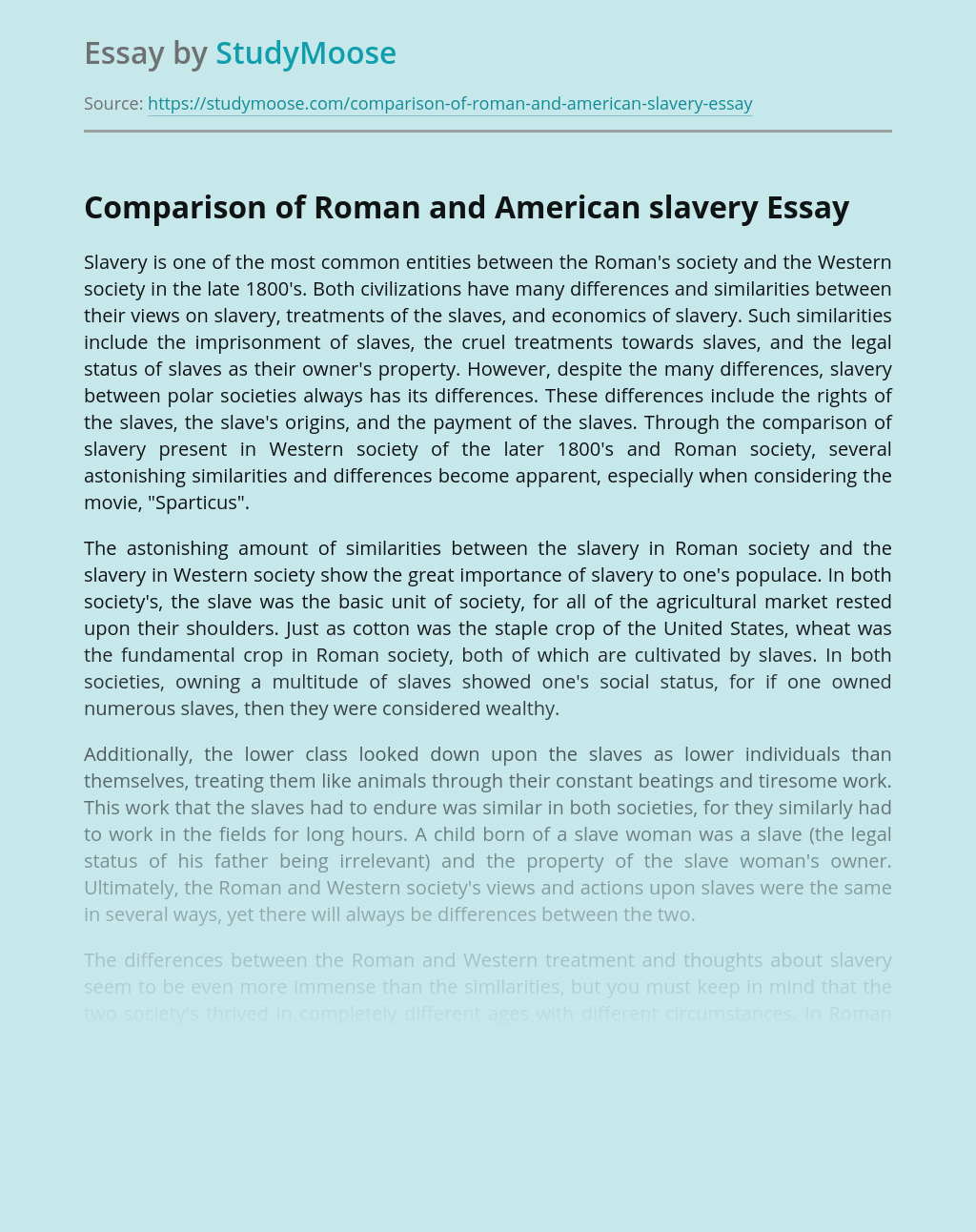 Turn in your highest-quality paper
Get a qualified writer to help you with
“ Comparison of Roman and American slavery ”
Get high-quality paper
Helping students since 2015
Stay Safe, Stay Original