Comparison of Past and Present Students

I. Introduction People often remark how different the students of today are to those in the past. Each generation claim that those who come after them are getting worse, while those who came before them are much better than they were when they were students. Are students really all that different “Now” than they were “Before”? It’s been said that with every batch, with every generation, students are slowly degrading, that you could count with your fingers, those student who truly excel nowadays.

Don't use plagiarized sources.
Get Your Custom Essay on Comparison of Past and Present Students Just from $13,9/Page

It is a very common proclamation that young people now are disrespectful, unmotivated and without problem solving ability. Most people say that “compared to when we were in high school” the students are very different, incompetent. This is a common perception today, from non teachers and teachers alike, but is this true?

II. Context Of course, each generation is different; technology and culture change forces us to think and act differently, use different tools. The increase in population and politics also contribute to the differences between the students of the past and present.

Advanced technology, computer and other gadgets like cell phones and scientific calculator enabled the students do their task quicker and easier, tools that help them to be more efficient. In the past students had to handwrite or use a typewriter for their reports, one mistake and you’ll have to repeat it.

Now with computer, to matter how many mistake you make with your grammar and spelling the computer will detect your errors so you can make corrections before printing. With computers, you can edit reports or write additional data without doing it over again. Solving mathematical problem became easier too, with the use of calculators. Students in the past have to manually calculate before arriving with the answer, now with just pushing a few buttons, you’ll get the answer. One can find and download anything that is needed in the internet, without sifting through pages and volumes of books in the library. The printed books are almost phase-out as students now prefer ebooks they can read using their cell phones and tablets.

There are various mode of transportation, to take students from one place to another faster. Even the method of teaching had change with technology; PowerPoint presentations are often used, and there are even subjects where students learn about information technology and computers. As a result students of the present tend to be lazy and arrogant, and most of the time the equipments technology brings are taken for granted, and are used for fun and games. Then, they have to go without these gadgets, so students then needed to be precise, not make errors. They learned to concentrate, to go slow but sure not to make mistakes.

They are more organized and had more focus on whatever task they are doing. Our culture is constantly changing as we continue to grow, being influence by other culture and with the advancement of technology. We are becoming more materialistic, values and social norms changed brought by the influence we see on televisions or by surfing the internet. Because of these changes it is only natural to observe a difference on the behavior and attitudes of today’s students from students of yesteryears. In the past students are more respectful, industrious, punctual and obedient. Girls are demure and boys gallant; public display of affection is not allowed; teachers are more strict and can use corporal punishment on those who misbehave.

The presentation of oneself is very important, having a suitable hairstyle and wearing the proper uniform or appropriate attire is rigidly observed. Today’s student think that they are superior to their teachers as they think they can learn everything they need to know from the internet; they are lacking in their attention span and tend to be irresponsible; having a weird hairstyle and adding unnecessary accessories to their uniform is perceived as being cool. Now it is almost a requirement to have the latest gadgets, fashionable clothes and a boyfriend/girlfriend to be accepted in a clique, to belong. The increase in population and politics also play a part in making a difference between the students today from students who came before them.

Then, there are a lot less students and the teacher can pay closer attention to each of them. But with the increase of population more schools are being established especially for those places like in the rural area where the school is so far away a student has to travel several miles just to go to school. When the people in the administration of organization like DepEd and Ched, changes are bound to happen. In the past decade the curriculum is changed several times when the people in the administration changed, teachers and students alike adjust had to a new curriculum before they were used to the previous one. Politicians are also known for passing provisions that could affect the education system of our country; K to 12 is an example.

III. Summary Students of the present largely differ from students in the past, from the way they think, act and with the tools that they use. Their motivation, organization and efficiency have also changed. Technology, culture change, increase in population and politics all contribute in making these differences. Technology provides the new tools and gadget that students enjoy today. When culture changes the social norms and values also change, in turn there would be an alteration in the behavior and attitudes of the students, our youth. The increase in population and politics create circumstances such as different education system and curriculum, where teachers and students alike have no choice but to make adjustments.

IV. Conclusion Change is inevitable with the passage of time, changes that are caused by different things. Students and teacher alike have to adapt to these changes, it can make a task more efficient, it can make learning more exciting or it can become a distraction. The change affects the motivation and attitude of the students. It must be considered before a comparison is made that every batch, every generation have their own way, leave their own marks, it would be unfair to say that students today are becoming worse for they are only responding to the situations created by these changes.

Comparison of Past and Present Students. (2016, Nov 26). Retrieved from https://studymoose.com/comparison-of-past-and-present-students-essay 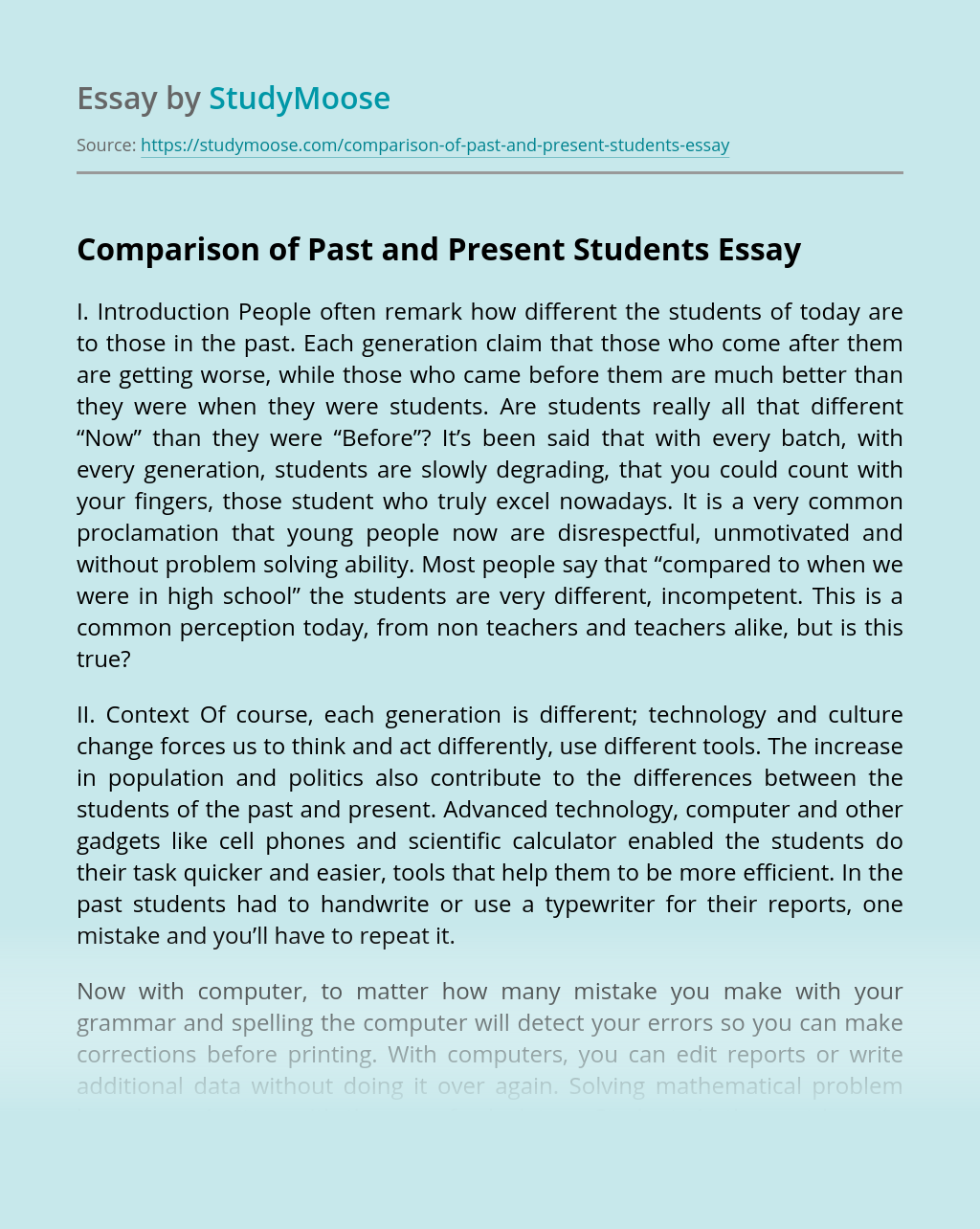 Two Main Theories of Special Education There are two main

Two Main Theories of Special Education There are two main theories to special education. One is the cascade of services and the other is the inclusion theory. I will discuss some of the advantages as well as some of the disadvantages of both theories. I will also discuss which theory I believe in and why....

View sample
The Problem of Plagiarism

In today’s era of education, plagiarism is a global issue, each university is facing heavy issue. It is derived from the Latin word “predatory”, which means kidnapping or theft. Stealing the intangible such as words, thoughts, illustrations or ideas is plagiarism (Girard, 2004). People have different views on plagiarism. Neville (2010) mentioned plagiarism is an...

In the U.S, more than 750,000 girls ages 15-19 become pregnant every year. More than 80 percent of these are unintended pregnancies, according to dosomething.org. That is a great amount of teenagers that could have potentially dodged a bullet with a little more sexual education. Will a lack of sexual education continue to play a...

News correspondent David Barbosa of the New York Times Magazine has published an article on May 1st 2008, entitled: ‘China Says Abusive Child Labor Ring Is Exposed’. In his news article, Barbosa uncovered more in-depth analysis surrounding the incident of child labor in China, in which according to him acknowledges child labor abuse at the...

Education is a process to develop the intellectual faculties of the man. It makes the civilized, refined, cultured and educated. For a civilized and socialized society, education is the only means. It makes a man perfect. It is systematic process through which a child or a man acquires knowledge, experience, skill and sound attitude. Every...