I chose to write a comparison essay on Flannery O’Connor’s “A Good Man is Hard to Find” and William Faulkner’s “Barn Burning”. Both of these stories share central characters with similar personalities as well as similar themes and conflicts through the stories.

The Grandmother, in “A Good Man Is Hard to Find”, is an old woman with old-fashioned ideas and manners. She considers herself to be a good person, but she is also very selfish and manipulative. She makes up lies to get what she wants, such as when she tells the children about a secret panel in the plantation house that she wants to visit just to intrigue them into wanting to stop there.

Don't use plagiarized sources. Get your custom essay on
“ Comparison of O’Connor’s and Faulkner’s Short Stories ”
Get custom paper
NEW! smart matching with writer

She tries to come across as an honest and holy religious woman, when in actuality, she is just the opposite. She uses the term “good man” quite loosely whenever she wants to please a man.

He uses his authority as an adult and as a father to put guilt trips on Sarti. He tells him that no matter what, he should never go against his own blood because blood is thicker than water.

Another similarity in the two characters is that they are both responsible for the actions that take place throughout the stories. The Grandmother is constantly trying to direct the family’s vacation and tell them what to do. She feels that she knows best because she is old and wise.

This is ironic because listening to the Grandmother is what gets the family into the predicament in the end. Because she insists on visiting the old plantation house, the family winds up getting lost. Because she sneaks her cat along for the trip, Bailey get startled which causes the family to get into a car accident. All of this leads up to the family meeting up with Misfit and his two accomplices, which in turn, causes the death of all five people.

Abner, like the Grandmother, can not accept the fact that most of his actions caused his problems. He also feels that he knows it all and does not think of the future consequences of his actions. He feels no remorse in telling Sarti to lie for him because he feels that what he did was justified.

Both “A Good Man is Hard to Find” and “Barn Burning” involve the theme of a conflict between youth versus age. The Grandmother and Abner both have authority over the other characters because of their age. In “A Good Man is Hard to Find”, the characters disregard the Grandmother in the beginning when she says that she will not take her family to Florida because of the murderer who is loose there. But they do make the decision to listen to her when it comes turning around and looking for the plantation house, which turns out to be a fatal decision.

In “Barn Burning”, Sarti starts off obeying his father, but then makes the fatal decision to turn him in. The small difference in these stories is that the family’s decision affects each one of them to where the outcome is the same for all, death. While Sarti’s decision does change his life and the course that it would take, it only causes death for his father.

In conclusion, Flannery O’Connor’s “A Good Man is Hard to Find” and William Faulkner’s “Barn Burning” are both stories that involve a central character whose actions seal the fate of all the other characters. They both have similar traits and views. Most importantly, neither of the two characters will ever openly accept responsibility for what happens, although they may feel it inside. Both short stories also involve a similar theme of choices. The characters make their choices of whether or not to do what the Grandmother and Abner say, according to what they feel is the right thing to do. Even though the Grandmother from “A Good Man is Hard to Find” and Abner from “Barn Burning” are extremely different people in very many ways, they are also quite similar. 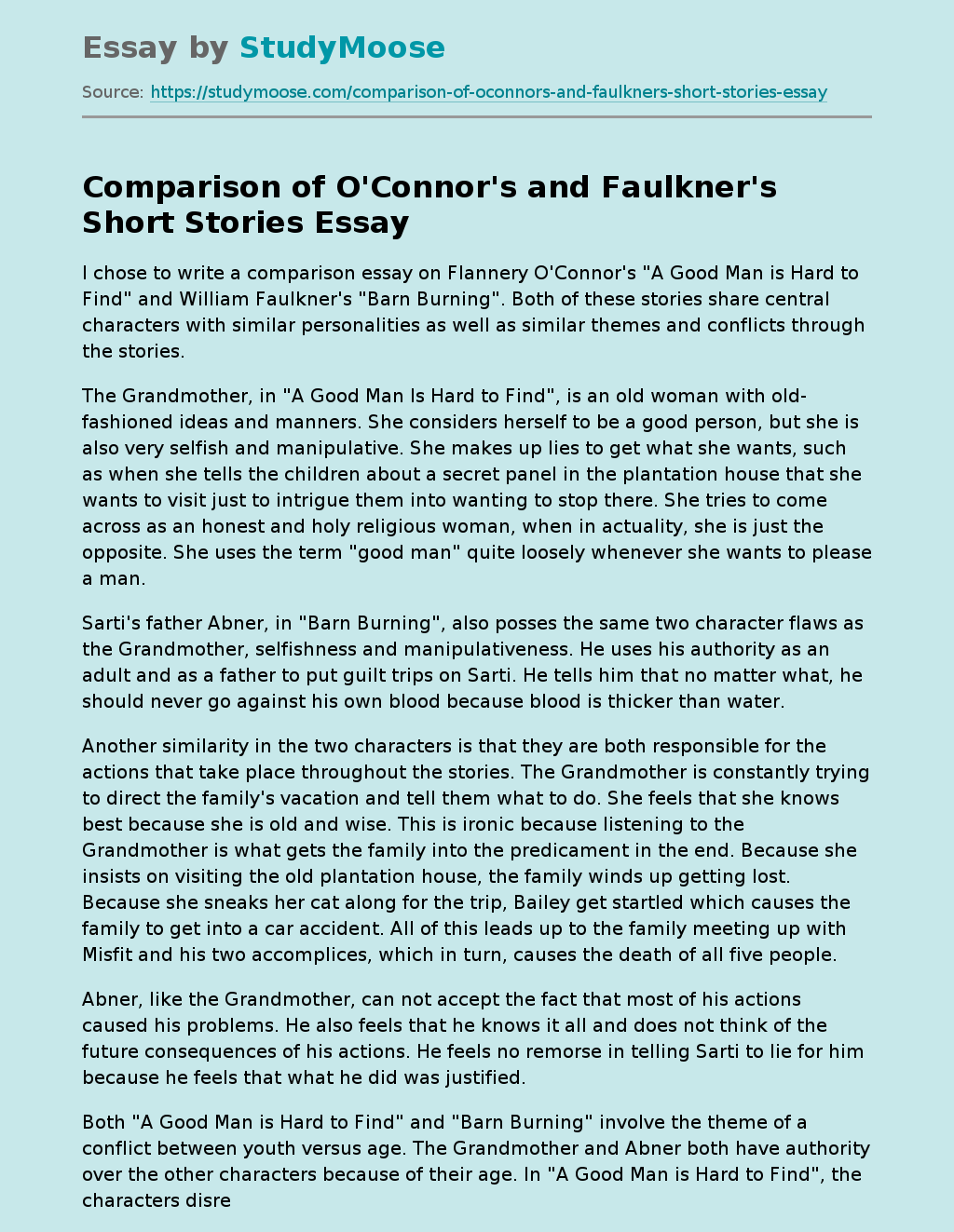