Mark Twain and F. Scott Fitzgerald are two widely known American authors who wrote great novels, but differ in many ways. They both wrote stories on life journeys, however; Twain used pre-adolescent characters to show how an individual should behave in society. Whereas, Fitzgerald uses adult characters to show how an individual is harmed by society. Mark TwainA? a‚¬a„? s characters have many dreams in all TwainA? a‚¬a„? s stories. On the other hand, FitzgeraldA? a‚¬a„? s older, adult characters who still have dreams allow the larger community to affect them from pursuing his or her aspirations.

Turn in your highest-quality paper
Get a qualified writer to help you with
“ Comparison of Mark Twain and F. Scott Fitzgerald ”
Get high-quality paper
NEW! AI matching with writer

Scott Fitzgerald characters falter because they let society affect their dreams. Mark Twain was born on November 30, 1835. His birthplace was in Florida and he grew up in a relatively small town. Mark TwainA? a‚¬a„? s original name was Samuel Langhorne Clemens. Mark TwainA? a‚¬a„? s father was John Marshall and his mother was Jane Lampton Clemens. Samuel’s father, John, was a judge. When little Samuel was four years of age he moved to Hannibal with his family. His parents enrolled him in a private school there.

There, Clemens became a river pilot assistant and got his license in 1858. This was a very important time for Samuel because itA? a‚¬a„? s where he got his writerA? a‚¬a„? s name, Mark Twain. In piloting the expression “Mark Twain” means that is safe to navigate. Many authors use other names when they write books and Samuel decided on Mark Twain because of his piloting experiences.

Later in his life, Mark Twain began working as a newspaper reporter for several newspapers all over the United States. Mark Twain married Olivia Langdon in 1870. Together, they had four children. Unfortunately, one died as an infant and the others died in their 20A? a‚¬a„? s. Clara was their only child who lived a long life.

She lived to be 88 years old and had one daughter. Mark TwainA? a‚¬a„? s first successful writing was “The Celebrated Jumping Frog of Calavaras County. ” It gave him a lot of fame and the critics really liked it. Twain’s first book was “The Innocents Abroad,A? a‚¬A? and was published in 1869. The arch of his fame was probably when he wrote “The Adventures of Tom Sawyer” in 1876 and A? a‚¬A“The Adventures of Huckleberry Finn,A? a‚¬A? in 1885. He has a long list of stories, books, and newspaper article. He wrote 28 well know ones in all. Mark Twain passed away on April 21, 1910.

He leaves a big legacy of childhood stories and many people still read his books. He is a very respectable American author and his books are brilliant. Scott Fitzgerald was born on September 24th, 1896. His father was Edward Fitzgerald. He grew up in St. Paul, Minnesota. As a child he was brought up as a devote Catholic. The first School he attended was St. Paul Academy. When he graduated he went to Princeton and was part of the class of 1917. ScottA? a‚¬a„? s first engagement was to Zelda Sayre. She later broke their engagement. One of his major life events is when he went to St.

Paul to write, A? a‚¬A“This Side of Paradise. A? a‚¬A? The critics loved this story and got many sales. Another major life event is when Zelda Sayre took him back and they got married. They took a trip to Europe where is wife had their first child. The first time he wrote something he was in a school newspaper club. The first thing that got published was the A? a‚¬A“Romantic Egotist. A? a‚¬A? He had immediate success at the age of 24. The subject he wrote on was young love. His style was life journeys of adults. He wrote his journey stories with clarity, with color, and with music.

His style changed a little when he started to drink in 1923. His best book got great reviews, but not many sales. The A? a‚¬A“Great GatsbyA? a‚¬A? written in 1924 probably marked his arch of fame and all the critics fell in love with it. When Scott ran out of money he would write short stories. Most of his income came from his short stories because his novels didnA? a‚¬a„? t have many sales until after his death. Some of his most popular works were: A? a‚¬A“The Vegetable,A? a‚¬A? A? a‚¬A“The Offshore Piddle,A? a‚¬A? A? a‚¬A“Bernice Bobs,A? a‚¬A? A? a‚¬A“Her Hair,A? a‚¬A? A? a‚¬A“May Day,A? a‚¬A? and A? a‚¬A“The Beautiful and Damned. A? a‚¬A? Many things influenced Scott Fitzgerald. Aspiration, literature, Princeton, Zelda Fitzgerald, and alcohol are some of them. All of these things explain why he writes more about adults and their journeys instead of children. Scott Fitzgerald leaves us a legacy of one of the greatest American authors in history. He was a great man who became friends with another great author, Hemmingway. In a strange way they fed off each otherA? a‚¬a„? s stories. Scott Fitzgerald pasted away on December 21st, 1940 of a heart attack. 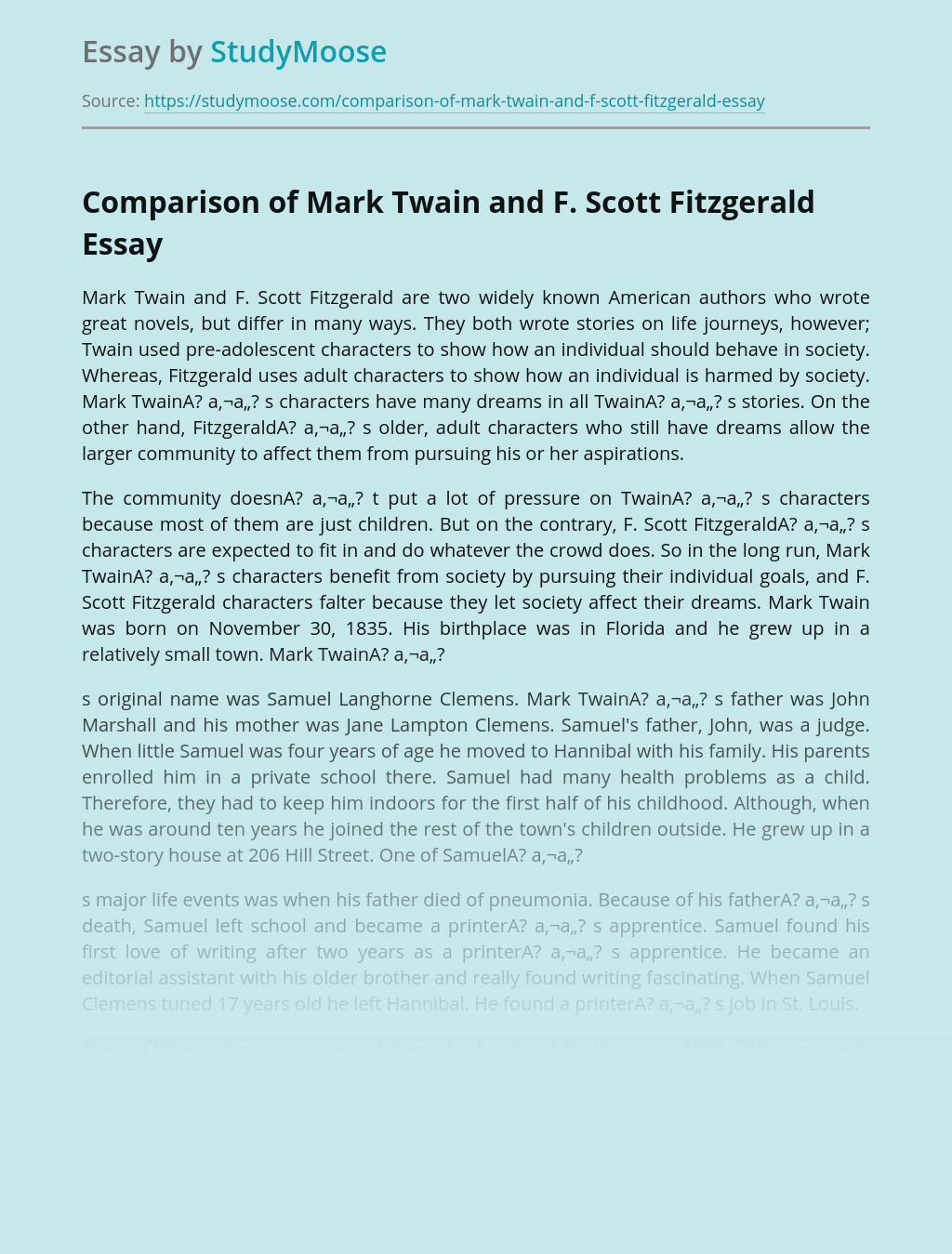 Turn in your highest-quality paper
Get a qualified writer to help you with
“ Comparison of Mark Twain and F. Scott Fitzgerald ”
Get high-quality paper
Helping students since 2015
Stay Safe, Stay Original