It is obvious to most people the differences between black and white, light and darkness, or Pepsi and Coca-Cola. Many people have different preferences for each of these things, as well as different views about them. While one person may argue that Pepsi is the ultimate cola beverage, another person may claim that Coca-Cola is the best by far. This is such the case with many different people in this world, on many different topics. A prime example of contrasting views on many issues is Niccolio Machiavelli and Lao Tzu.

Don't use plagiarized sources.
Get Your Custom Essay on Comparison of Lao Tzu and Machiavelli Just from $13,9/Page

Among the issues that they address include war and violence and the qualities of an ideal ruler.

The issue with the most differences is obviously that of war and violence. In his work “The Qualities of a Prince” Machiavelli claimed that a good ruler must always be prepared for war. Even when their country is not at war, the ruler must be constantly considering combat. They must take the time to look at the land in which any battle will be fought, whether that is in their kingdom or that of their enemies.

“He must, therefore, never raise his thought from this exercise of warm and in peacetime he must train himself more than in time of war; this can be done in two ways, one by action, the other by the mind. And as far as action is concerned, besides keeping his soldiers well disciplined and trained, he must always be out hunting, and must accustom his body to hardships in this manner; and he must also learn the nature of the terrain, and know how the mountains slope, how the valleys open, how the plains lie, and understand the nature of rivers and swamps…” (38).

Lao Tzu’s “Thoughts from the Tao-Te-Ching” took a more pacifistic approach. He believes that no man had the right to defeat enemies by using violence and weapons. When violence is used against somebody, it will eventually rebound and come back upon the person who inflicted it.

“Whoever relies on the Tao in governing men

or defeat enemies by force of arms.

For every force there is a counterforce.

The contrast in Machiavelli’s ideal ruler and that of Lao Tzu is drastic. Machiavelli thinks that the ideal ruler should be careful when it comes to being generous. He believes that if a ruler is too generous, the people he governs will become unappreciative of their good fortune. A prince should be feared by his people, but they should not despise him because of it. “A prince must nevertheless make himself feared in such a manner that he will avoid hatred, even if he does not acquire love; since to be feared and not to be hated can very

well be combined; and this will always be so when he keeps his hands off the property and the women of his citizens and his subjects. ” (44).

Lao Tzu has many views that are in great opposition to those of Machiavelli. He believes that the best ruler is one that the people don’t even realize is there. A leader should be loved, and not feared or hated. He acts upon things, and when he is a success, the people of his kingdom get the full credit for his work.

“When the master governs, the people

are hardly aware that he exists.

Next best is the leader who is loved.

Next is the one who is feared.

The worst is the one who is despised…

The Master doesn’t talk, he acts.

When his work is done,

A ruler should also not have the desire to leave his country. If you are restless and feel the urge to move on, then you will lose touch with who you truly are.

“The heavy is the root of the light,

The unmoved is the source of all movement.

Thus the master travels all day

However splendid the views,

She stays serenely in herself.

Why should the lord of the country

If you let yourself be blown to and fro,

You lose touch with your root.

If you let the restless move you,

Clearly these men believed in two entirely different sets of values. This can be shown in their interest and opinions on many subjects, among them violence and war, and the traits of an ideal ruler. One is full of optimism, while the other brings out the pessimism is the most jubilant people.

Comparison of Lao Tzu and Machiavelli. (2016, Jul 01). Retrieved from https://studymoose.com/comparison-of-lao-tzu-and-machiavelli-essay 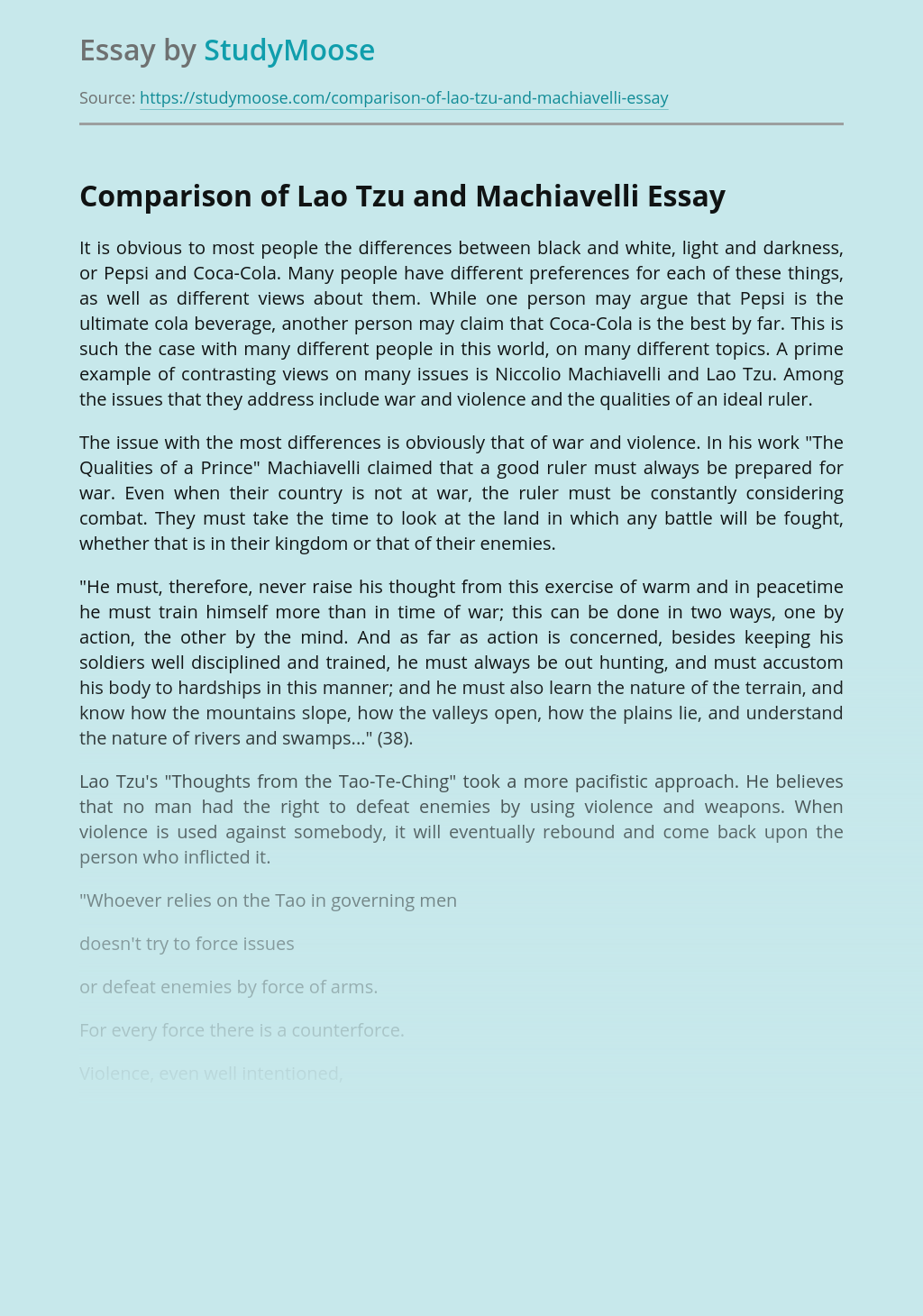 Introduction Business planning is integral part of every firm and company that like to exceed in the growth and to achieve its targets in the future. Under the subject of business strategy we help to get all the information and practice on how this all works and how to resolve the issues when a company... VIEW ESSAY

Executive Summary In the given report the major components of the supply chain management of The Coca-Cola Company has been discussed. It is stated that the company is the leading brand in the food and beverage industry and has been serving the society since March 1994. There are many changes took place in the supply... VIEW ESSAY

I. Introduction An effervescent drink that launches co2 under conditions of normal climatic pressure. Carbonation might happen naturally in sparkling water that has taken in carbon dioxide at high pressures underground. It can also be a byproduct of fermentation, such as beer and some white wines. Numerous curative homes have actually been credited to effervescent... VIEW ESSAY

First I want to say this project was a new chance to learn about what I consume. In my project I learned that carbonated drinks otherwise known as soda. I was surprised to learn about the ingredients in soda. By the way, that was one of my goals. Speaking of goals, my other goal was... VIEW ESSAY