Comparison of IFRS To GAAP in Business Management

There are several differences between the International Financial Reporting Standards (IFRS) and the U.S. Generally Accepted Accounting Principles (GAAP). The IFRS is considered more of a “principles based” accounting standard in contrast to U.S. GAAP which is considered more “rules based.” By being more “principles based”, IFRS, arguably, represents and captures the economics of a transaction better than U.S. GAAP. As a team me collaborated to answer the following seven questions. IFRS 2-1: In what ways does the format of a statement of financial of position under IFRS often differ from a balance sheet presented under GAAP? IFRS does not mandate a specific order or classification of accounts on the statement of financial position.

Don't use plagiarized sources. Get your custom essay on
“ Comparison of IFRS To GAAP in Business Management ”
Get custom paper
NEW! smart matching with writer

In most cases, companies report assets in reverse order of liquidity. An example of the order of accounts on the statement of financial position is as follows:

GAAP specifically requires that all accounts be ordered based on their degree of liquidity.

Therefore, cash is usually reported first and non-current assets will be reported last. Below is an example of the order typically found on a GAAP balance sheet:

Information that is relevant is anything that could be viewed as useful in the eyes of an investor, creditor, or regulator. Information that is faithfully represented should conform to industry standards and any estimates should be conservative in nature. IFRS 2-3: What terms commonly used under IFRS is synonymous with common stock and balance sheet? Balance Sheet is synonymous with the “Statement of Financial Position” and Common Stock is typically labeled as “Share Capital Ordinary” on IFRS financial statements. IFRS 3-1: Describe some of the issues the SEC must consider in deciding whether the United States should adopt IFRS. The SEC has several aspects to consider when it comes to the adoption of IFRS in the United States.

First, the SEC should consider the overall costs impact this will have on businesses. It is likely that it would cost billions of dollars in new reporting expenses for U.S corporations to implement IFRS. It would also require accounting firms to vastly change their education requirements. Second, the SEC’s main job is to protect investors from fraud on public exchanges. The commission must determine whether IFRS does a better job of protecting investors from unlawful activity. IFRS 4-1: Compare and contrast the rules regarding revenue recognition under IFRS versus GAAP. Under GAAP, it is possible to use cash-basis or accrual basis accounting for revenue recognition. Under cash basis, revenue is recognized with payment is received. Under accrual basis, revenue is recognized when it becomes economically significant. GAAP has specific requirements for various industries on when an event qualifies to be recognized as revenue.

IFRS has fewer requirements on revenue recognition, but follows the same basic principle of economic significance. Revenue can be recorded when t is probable that any future economic benefit associated with the item of revenue will flow to the entity and it can be measured reliably. IFRS 4-2: Under IFRS, do the definitions of revenues and expenses include gains and losses? Explain. Under IFRS, revenue is used to describe the total amount of economic benefits arising from the ordinary operating activities of a business. Therefore, it does not include non-operating gains. This principle applies equally to expenses, which do not include losses from non-operating activities. FRS 7-1: Some people argue that the internal control requirements of the Sarbanes-Oxley Act (SOX) put U.S. companies at a competitive disadvantage to companies outside the United States. Discuss the competitive implications (both pros and cons) of SOX.

When it was implemented in 2002, SOX created an array of new reporting requirements for publically traded companies. While it is true that this costs American businesses additional capital in compliance expenses, it also creates a more stable financial system. The major frauds of Enron and WorldCom were much more damaging the financial system. Overall, it reduces the risks for investors in public companies and encourages foreign direct investment. After all of the information was gathered, I could say that I have a much better understanding of the differences between the International Financial Reporting Standards (IFRS) and the U.S. Generally Accepted Accounting Principles (GAAP).

Comparison of IFRS To GAAP in Business Management. (2016, Sep 23). Retrieved from https://studymoose.com/comparison-of-ifrs-to-gaap-in-business-management-essay 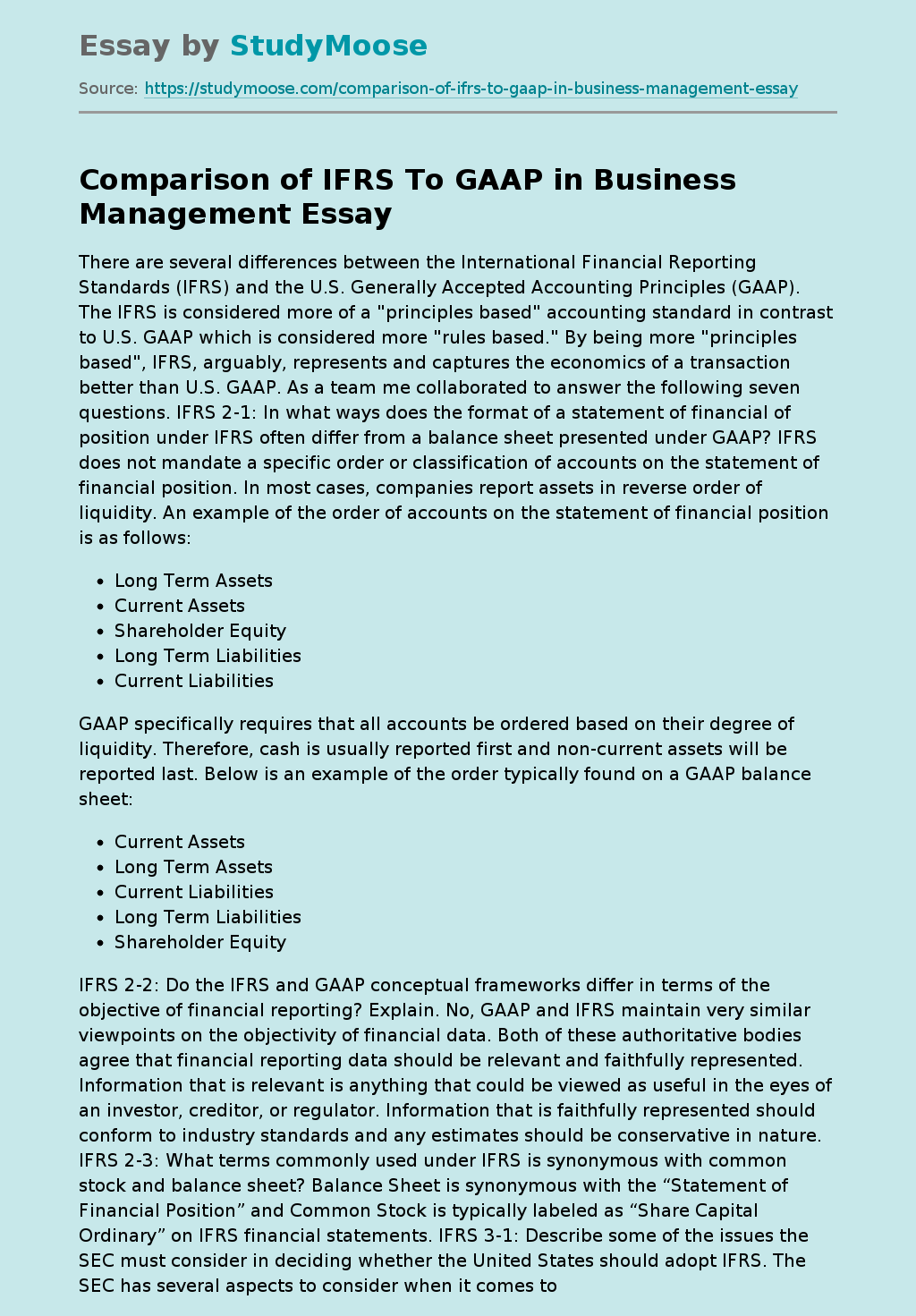