Although we cannot compare the horrors of the Nazi Concentration camps to the American “Relocation Centers”, there are many similarities. Both of the groups of victims were of the minorities, and these cultures were somewhat of an enemy to the leader of their country. These groups (the Japanese in America nearly two thirds of which were American citizens, and the Jews, Gypsies, the Poles, Slovaks, Communists and other enemies of the state in Germany and Poland, many of which had served the very countries who were persecuting them during World War One) were all unjustly and unfairly treated for many years, until the liberation of the Concentration camps, and the release of the prisoners in the ‘relocation centers’.

Don't use plagiarized sources. Get your custom essay on
“ Comparison of concentration camps to japanese internment ”
Get custom paper
NEW! smart matching with writer

While some may argue that the Japanese in these internment camps were treated fairly, many returned to their houses after their captivity to find another (white) family living in them, and all of their belongings gone. But while the Japanese were in the camps, they were given enough food to live on, and lived in a quasi-communist environment, which is ironic considering the “anti-red” hatred and fear that was sweeping across the US.

In the case of Manzanar, which is in the Sierra Nevada’s, the interned were given one bunk in a large tar-paper barrack for each family, equal but small rations of food each week, and the able-bodied were given menial jobs that they were not paid for (i.e. building more barracks, although they had attended law school or had studied medicine.

) (http://thesierraweb.com/lonepine/manzanar.html) But according to the aforementioned website, “The camp was surrounded by barbed wire.” and “Guards with machine guns were posted at watchtowers, with orders to shoot anyone who tried to escape.” These quotes were said by former California Congressman Norman Mineta, who was 10 years old when he was taken from his home in San Jose, California, and put onto a train headed to Manzanar. (http://thesierraweb.com/lonepine/manzanar.html)

The nearly 12 million ‘undesirables’ that Adolf Hitler ultimately maliciously murdered, came from all parts of Europe–Germany, Austria, Hungary, Poland, Russia, Czechoslovakia, Yugoslavia, Serbia, Denmark, France, Sudetenland, Lithuania, Bulgaria, Romania, Italy Greece, Estonia, Rumania, Belgium, Holland, Norway and Latvia. He and is SS (which stands for Schutzstaffel, or protection squad) rounded up all of the people of these countries that did not have the features of the ‘Aryan’ race, which was Hitler’s super-race of people with blond-hair and blue-eyes generally, and brought them to concentration, labor, and extermination camps all over Europe. Some of the largest and most destructive camps were Chelmo, Treblinka, Majdanek, Sobibor, Belzec, Auschwitz, Dachau, Westerbork, Buchenwald, Bergen-Belsen, Skopje, Mauthausen and Ravensbrueck. (http://fcit.coedu.usf.edu/holocaust/default.htm)

At the end of World War Two, when we were emptying the ‘relocation centers’, and many Japanese were returning home to find no home, they tried to blame the US and sue the government. Then president, Harry S. Truman along with Congress decided that their claims had no validation, and dismissed them. Many Japanese survivors of the internment camps are still alive today, and will gladly tell you their story, as many survivors of the concentration camps will, to prevent anything like these events from happening again.

In my opinion, the American ‘relocation centers’ and the Nazi Concentration camps were almost identical, aside from their conclusions. While millions of people were killed in the Concentration Camps, less than 2,500 were killed in American camps. But these camps do not differ in their use. They were both meant to house the people who were shunned by society. While in Europe they were facing Fascist dictators, we here in America were under a so-called Democracy. But what kind of Democracy imprisons its own citizens? More than two thirds of the Japanese who were interned were Nisei, or second generation Japanese who had been born in the United States. The Nisei’s parents (Issei) were almost all US citizens, albeit naturalized, who had come over from Japan in the late 1800’s and early 1900’s.

The US and the Nazi regime could never be called alike, in any way, but their ways of getting the undesirables “out of the way” were identical. Hitler almost succeeded, and he would have, if it weren’t for the vigilant Allied troops, and the resistance of loyal French, German, English, and American citizens. I don’t believe that Franklin Delano Roosevelt meant any harm to the Japanese when he signed the bill condemning them to prison. Maybe he thought he was helping them by removing them from public ridicule. The world may never know. 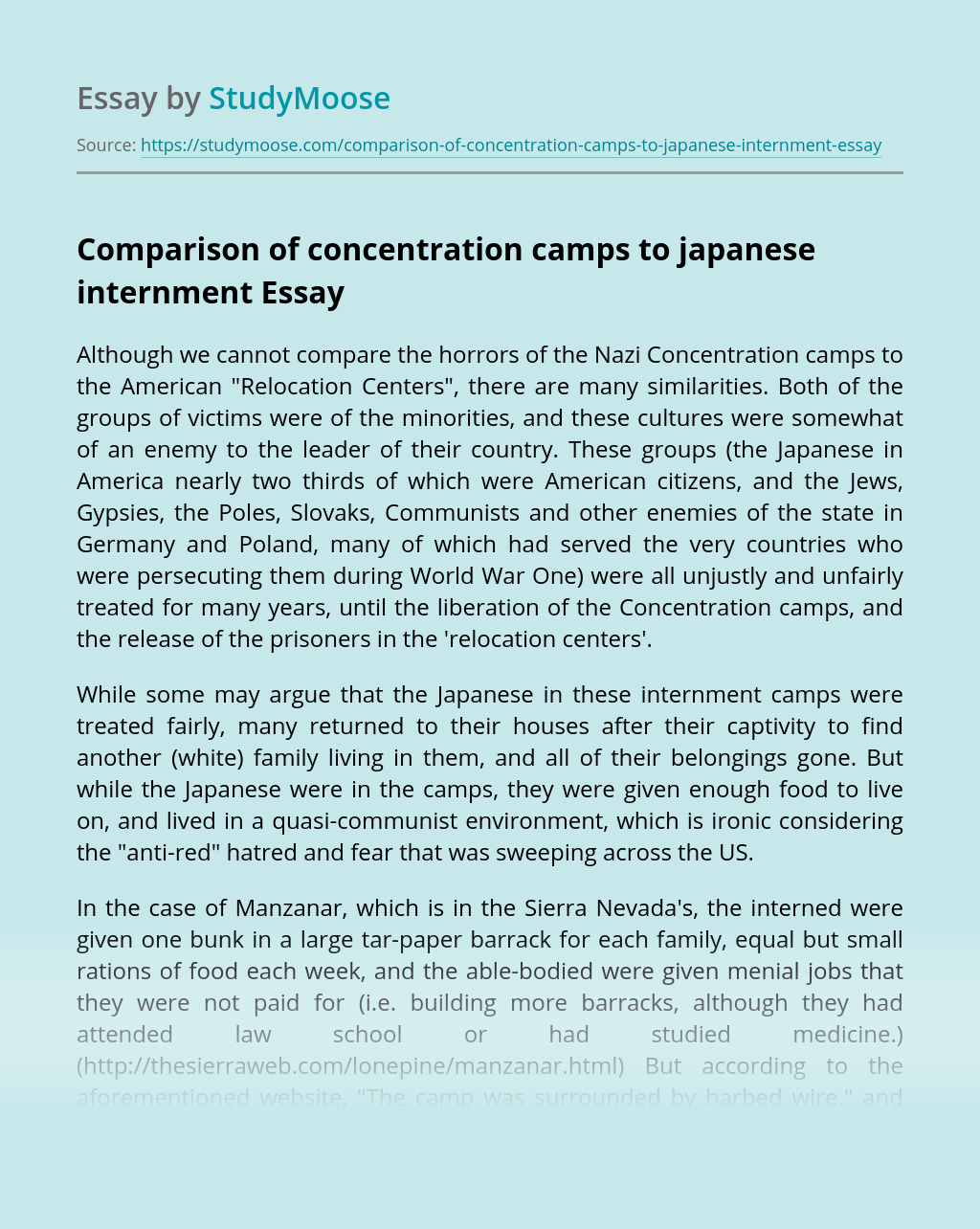