Both ‘Belfast Confetti’ and ‘Bayonet Charge’ present individuals caught up in conflicts. However, the speaker in ‘Belfast Confetti’ is a civilian whereas ‘Bayonet Charge’ the subject is a soldier who has chosen to go to war. Carson is writing about a topic he knows well as he is an Irish poet living during the Troubles in Northern Ireland. Hughes is imagining what it must have been like for a soldier in World War One.

The speaker in ‘Belfast Confetti’ is right in the middle of the action – ‘Suddenly as the riot squad moved in…’ and is caught up in the streets of Belfast during a bomb scare.

Don't use plagiarized sources. Get your custom essay on
“ Comparison of ‘Bayonet Charge’ and ‘Belfast Confetti’ ”
Get custom paper
NEW! smart matching with writer

He is panicking because he cannot escape the ‘labyrinth’ of the streets although he knows them very well. Calling the streets a ‘labyrinth’ is a metaphor which shows the confusion and panic he feels as a labyrinth is something you cannot get out of. Carson uses punctuation as a metaphor for the riot squad itself as they block the streets and stop the speaker escaping: ‘blocked with stops and colons’.

This is effective because punctuation is used to control and give order to a sentence and this is what the riot squad are trying to do in the chaos of the city.

Carson also uses punctuation as a metaphor for shrapnel, saying that it is ‘raining exclamation marks’ which is the metal objects the IRA would pack into their homemade bombs. This is effective because exclamation marks look a bit like lethal weapons because they are thin and sharp like a tomahawk.

The speaker feels trapped not only by the riot itself but he is trapped in the political situation of the time. The two sides were trying to resolve conflict but couldn’t find a way to communicate without returning to violence. So Carson using language and punctuation to represent the conflict is effective. He struggles to communicate: ‘I was trying to complete a sentence in my head, but it kept stuttering’. This metaphor gets across the sound of gunfire and the speaker’s struggle to express and communicate the chaos of the situation. It could even be a metaphor for the Troubles themselves.

In the same way as Carson, Hughes lands the reader right in the middle of the action, beginning the poem with ‘Suddenly…’ which creates the same blunt, startled effect that the soldier himself must have felt as he began his bayonet charge. By keeping the soldier anonymous, Hughes makes it seem as if this experience was universal among soldiers who fought in the First World War. He was not a soldier poet himself, unlike Owen, so the powerful images he uses conjure up the energy and physicality and terror the soldier feels. The simile ‘sweating like molten iron from the centre of his chest’ describes vividly the heat and intensity of pounding through ‘shot slashed furrows’ charging at the enemy and facing death. Ironically, any bullet which may kill the soldier would also cut through his flesh but from outside his body, so this ‘molten iron’ coming from his insides creates an awkward parallel which makes us think of the death he is facing.

Both poets use enjambed lines, but Carson’s poem is more chaotic and stuttering because of the caesuras in it, whereas Hughes’s is more fluid. Carson breaks up his lines and has a mixture of short and long lines because they represent the streets being blocked as he tries to get down them. Although Hughes uses caesuras too, the effect is different. Because Carson is using punctuation as a metaphor you notice it more and it is more powerful, whereas in Hughes’s poem the caesuras make it more narrative. Also, the caesuras in Hughes’s poem are disguised because the stanzas a re more regular.

Neither of the poems use any rhyme. Rhyme can sometimes suggest harmony as the sounds match, but Carson is trying to stress the division in the city and the blunt, aggressive and violent events. In Hughes’s poem the lack of rhyme is perhaps because the man has just ‘jumped up’ and is running in a bewildered way, so again, rhyming would be too neat and ordered to effectively convey this chaotic and panicked experience. 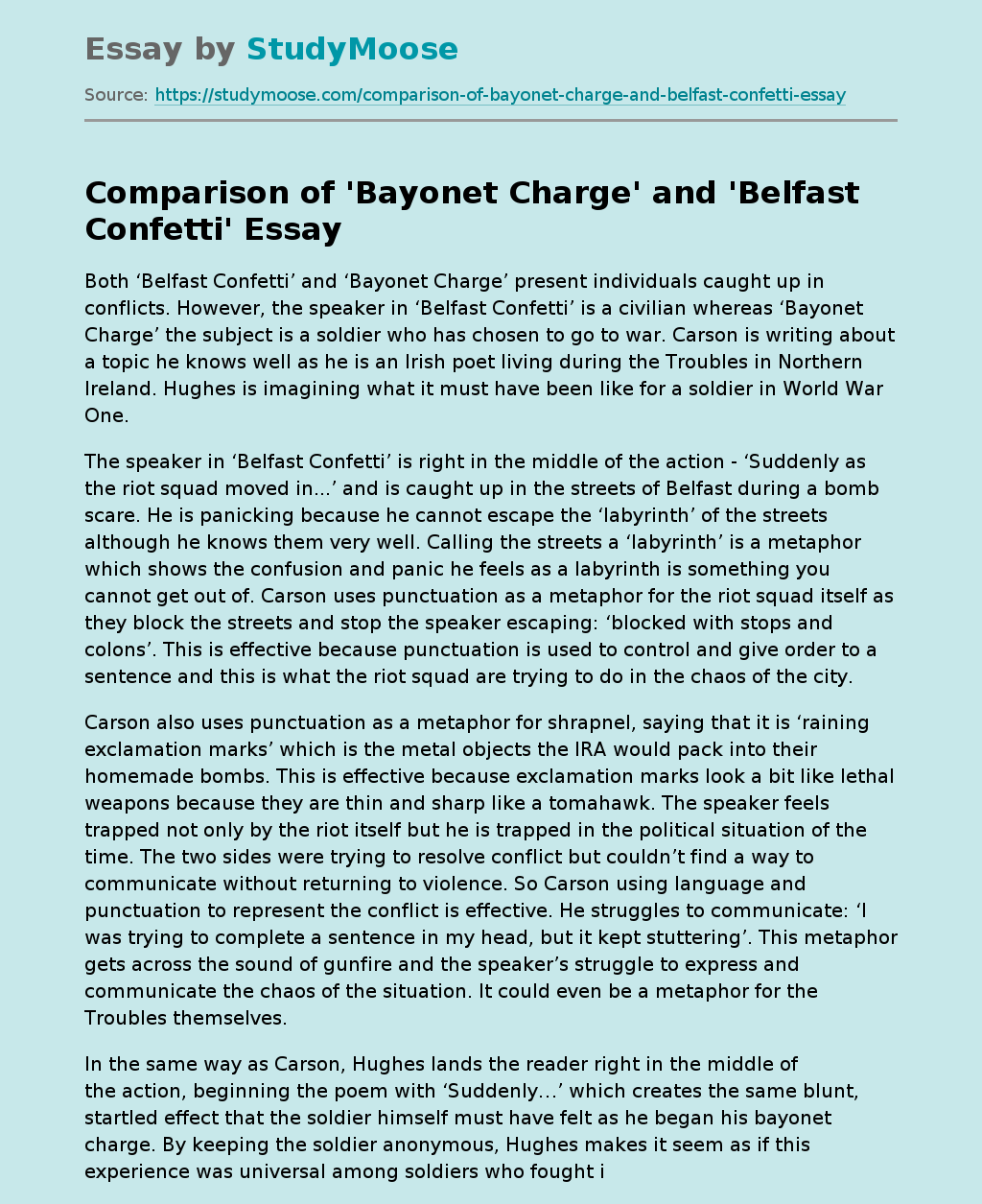