Comparison of Macbeth, A Streetcar Named Desire, 'Enter Without So Much As Knocking,' 'Katrina,' The Collector and The Great Gatsby

Similarities in texts are often present and can be linked in many ways allowing readers to make comparisons. Although each text is unique in its construction there are similarities in theme, character and setting. The six texts represented and compared here are Macbeth, A Streetcar Named Desire, ‘Enter Without So Much As Knocking,’ ‘Katrina,’ The Collector and The Great Gatsby. Representations of men and women in each text will be discussed highlighting their similarities and differences as well as the relationships men and women have with each other.

Don't use plagiarized sources. Get your custom essay on
“ Comparison of Macbeth, A Streetcar Named Desire, ‘Enter Without So Much As Knocking,’ ‘Katrina,’ The Collector and The Great Gatsby ”
Get custom paper
NEW! smart matching with writer

The challenging and reinforcing on my own notions of gender will also be discussed. Macbeth Gender is a major issue in the play Macbeth by Shakespeare representing the different roles portrayed by both men and women. Women during this medieval time were not allowed an education and played a domestic role in the home. The man however was the king of the family with absolute control. In Macbeth the female role of Lady Macbeth demonstrated the opposite of the reader’s expectations of a woman in this era.

She is portrayed to the reader as very assertive and plays an active and dominant role in her marriage and the plot of the play, not the traditional role of the subjugated wife. As Lady Macbeth drives her husband toward committing Duncan’s murder, she indicates her desire to lose feminine qualities and adopt masculine ones as quoted in, “Come, you spirits / That tend on mortal thoughts! Unsex me here, / And fill me from the crown to the toe top full / Of direst cruelty.

” This implies men are more capable of cruelty than women but ironically, Lady Macbeth is more suited to murder than her husband.

The reader feels more sympathy towards Macbeth who is tormented between his ambition and knowledge of right and wrong. “virtues / Will plead like angels trumpet-tongu’d against / The deep damnation of his taking off” demonstrates his weakness and distress about the murder. Although Lady Macbeth is evil and scheming I feel she represents a strong character not conforming to the submissive role adapted by women of her time, reinforcing the equal role adopted by women today.

A Streetcar Named Desire In A Streetcar Named Desire by Tennessee Williams, the setting is 1930’s New Orleans postwar America, depicting the transition of women from the old to the new South. Although different to Lady Macbeth’s role, the women played the same submissive role as those portrayed in the era of Macbeth. Women were very dependant on men for sustenance and self image, and their happiness depended upon male companionship. Dependence on men is common to both Stella and Blanche.

Although Stella is depicted to the reader as a passive, gentle woman residing in a submissive role to her husband, Blanche is represented as being more assertive towards Stanley, yet still relies on a male in order to survive and escape destitution. Mitch is a soft-hearted and sensitive male who lives with his dying mother, while Stanley is the direct opposite and can be described as common, crude and vulgar. This is portrayed in the quotes where Blanche says to Stella, “There’s something downright bestial about him” and “Don’t hang back with the brutes! The reader feels sympathetic towards Stella as she is forced to believe her husband’s version of events rather than Blanche’s due to the submissive role in her marriage. Stanley takes advantage of Blanche by raping her causing the reader to despise him. The play challenges my own notions of gender as my insight into women of today in this situation, is that they would be supported and allowed to speak out against the perpetrator. Homosexuality is also an issue in the play causing Allan to commit suicide and Blanche’s mental instability.

Nowadays homosexuality is more accepted and not seen as such an indiscretion. Katrina In ‘Katrina’ by Bruce Dawe, men and women are perceived differently by the reader in the text, with the female appearing as the victim or weaker sex while the man is alleged to be the hero or the stronger sex. It is difficult to compare gender with the previous texts as the theme here is death which overrides other issues in the poem. Katrina is a two month old baby girl who is very close to death, while her healthy twin brother’s strength is growing.

This is portrayed to the reader in the quotes: “Your twin brother’s Two-month-old vigour hurts us,” and “your bowed legs kicking In defiance of your sickness, your body’s wasting. ” Another interesting point to make is that Katrina’s twin would most likely be the best match for organs and blood, and giving her those things would make him a real hero as it may save her life. Katrina’s mother is also represented as being fragile and lamenting in the quote, “Your mother grieves already. ” This poem challenges my notions of gender where women and men are equal as it portrays women as being weaker than men both physically and emotionally.

Enter Without So Much as Knocking Another Poem also by Bruce Dawe, in ‘Enter So Much As Knocking,’ portrays to the reader a typical 50’s stereotype of men, women and children. The mother is depicted as being, “one economy-size mum,” labelling her as an ordinary stay at home housewife, while the father is described as, “one Anthony Squires-Coolstream-Summerweight Dad”, depicting him as the suave business man. The representations of men and women between both of Dawe’s poems, is quite different probably due to the difference in theme, characters and setting with ‘Katrina’ focussing on sadness.

The relationship between the husband and wife in ‘Katrina’ appears to the reader to be closer and more involved, while in this poem it is more removed and divided. Even the baby is carried home in the mother’s arms at ten days old. My perception of this scenario is that the father would carry the baby home together with the mother, sharing the role rather than dividing it. “She took him shopping,” indicates that it is the woman’s role to shop, as shopping is not generally part of the male role.

Men are perceived as being the superior driver as reflected in the quote, “Now take it easy on these curves, Alice, for God’s sake. ” The only reason she is driving is because he is almost certainly drunk. It is apparent that the wife is obviously not intoxicated as it was not acceptable for women of this generation to be drunk. This challenges my opinion of women being equally as good drivers as men, and consuming similiar amounts of alcohol. The Collector In John Fowles’ novel The Collector, he presents to the reader the main characters Clegg and Miranda who are seen by many as a variation of Beauty and the Beast.

Miranda is portrayed as a beautiful, intelligent, young woman very similar to Belle, and is the beloved prisoner of the loathsome male creature Clegg, who is directly comparable to the Beast. Miranda is totally dependent on Clegg, similar to Stella in A Street Car named Desire. Clegg has wealth, power, a beautiful home and can give Miranda everything she needs. His character displays one of the most striking cases available of the male ‘objectification’ of women as he compares her as a beautiful butterfly when he says, “It was like catching a Mazarine blue again or a Queen of Spain fritillary.

G. P. on the other hand compared to Clegg, is portrayed to the reader as being chauvinistic and dominating women, but in an indirect way. Their major difference is that G. P. is interested in Miranda sexually as he is a promiscuous male displaying confidence, while Clegg is impotent and always making excuses such as, “I didn’t try very hard anyway. ” In nearly all of the texts compared, men are most often portrayed as having power or ruling over women, which is definitely true in the case of The Collector.

Clegg decides whether or not to let Miranda go and she is constantly at his mercy. The Collector challenges my gender ideas in the same way as A Streetcar Named Desire. The Great Gatsby In The Great Gatsby by F. Scott Fitzgerald, representations of women are portrayed differently to that of The Collector as women such as Miranda value intelligence over beauty, while Daisy in The Great Gatsby thinks intelligence in a female is of no use. This is reflected in the quote, “I hope she’ll be a fool-that’s the best thing a girl can be in this world, a beautiful little fool. In both The Great Gatsby and A Streetcar Named Desire, women are represented in similar roles probably due to the similar era and settings in America. The similarities in the two men – Gatsby (from The Great Gatsby) and Clegg (from The Collector), is that they both have immense power and wealth but are unable to use it to fulfill their dreams of being adored by the women they love. The reader feels somewhat sympathetic towards the plight of these two men as they have everything money can buy but still can’t have the most important thing in their lives – love!

Another character Tom Buchanan is depicted to the reader as being an arrogant, hypocritical bully and is described by Daisy as, “a brute of a man,” and as having “two shining arrogant eyes,” by Nick. He mistreats women just as Stanley does from A Streetcar Named Desire and the reader responds abhorrently towards them. Although some of the presentations of men in this novel are challenging, there is still a romantic presence associated with the actions of Gatsby, reinforcing my notion that gentlemen do exist.

In all of the above texts, representation of men and women in society is evident with similarities and differences apparent between the types of text. The comparisons on gender can be made by the reader together with those of theme, character and setting with definite patterns emerging. Although the reader responds differently to men and women in each text, my notions of gender have generally been challenged, particularly with the domination of males and submissiveness of females evident in characters in all six pieces of text.

Comparison of Macbeth, A Streetcar Named Desire, 'Enter Without So Much As Knocking,' 'Katrina,' The Collector and The Great Gatsby. (2021, Jun 01). Retrieved from https://studymoose.com/comparison-macbeth-streetcar-named-desire-enter-without-much-knocking-katrina-collector-great-gatsby-new-essay 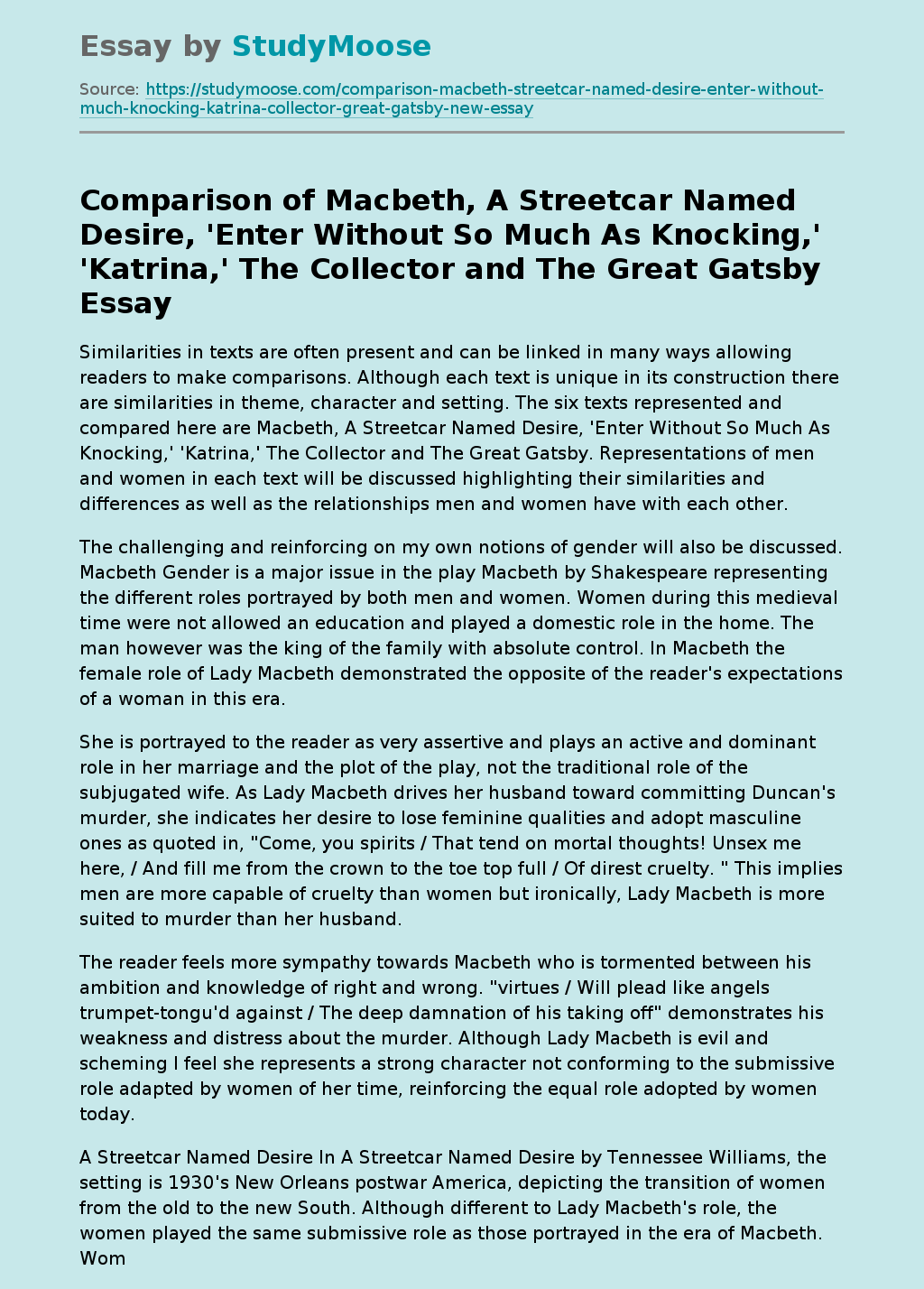