Don't use plagiarized sources. Get your custom essay on
“ A comparison of Hamlet’s reaction to the arrival of Rosencrantz and Guildenstern ”
Get custom paper
NEW! smart matching with writer

When Rosencrantz and Guildenstern arrive, Hamlet is overjoyed to see his “excellent good friends” (2.2.227) with whom he grew up. Hamlet is also delighted to meet with the Players. But this is where all the similarities end. In his conversations with Rosencrantz and Guildenstern, Hamlet becomes suspicious of the purpose of his old friends’ visit and he is perceptive enough to see through the outer disguise into the interior motives.

He forces them to reveal that they have been sent by the King to find out what is causing Hamlet’s “transformation” ( 2.2.5).

Hamlet admits his sanity by telling his good friends that his “uncle-father and aunt mother are deceived.” (2.2.348) Why does Hamlet admit his sanity to Rosencrantz and Guildenstern? Is it an another attempt to at deception, or is it to implant a sense of trust between Hamlet and his old friends? Hamlet could possibly be furthering his plans for revenge by admitting his sanity.

Hamlet’s friends would relay the message to the King and Claudius may think that Hamlet really is mad for admitting that he was supposedly feigning madness. On the other hand, at the conversation with the Players, his behavior is spontaneous. He welcomes his “good friends” (2.2.431) and it seems that he is “glad” (2.2.430) to see them again. He is friendly, funny and very open in his communication with the Players. Hamlet notices that one of the young players who plays female roles has grown a beard and he makes a joke about it. It also indicates that Hamlet has known them for a long time. The young Prince Hamlet also demonstrates his sanity when meeting with the Players. Hamlet shows that he is still capable of reasonable thought when he recites the lines to a play that he has heard only once. Hamlet reestablishes his friendship with the Players and shows his sanity to the Players so that he can further his plan for revenge. Hamlet outlines his plan for verification of foul play in his final soliloquy of the scene: I’ll have these players Play something like the murder of my father Before mine uncle. I’ll observe his looks, I’ll tent him to the quick. If a do blench, I know my course. (2.2.606-610)

Hamlet knows that the players can be trusted and therefore he is willing to use their service to find out the truth of his father murder. Shakespeare has shown us a variety of emotions and different aspects of Hamlet by comparing with his reactions to the arrival of his old friends to his reaction to the arrival of the Players. In doing so, we are able to see the world through the eyes of Hamlet and able to appreciate the strengths in the character and understand his weaknesses. After all, Hamlet is not an one-sided character. Shakespeare has created a complex character who is capable of different shades of emotions and feelings like us.

A comparison of Hamlet's reaction to the arrival of Rosencrantz and Guildenstern. (2020, Jun 01). Retrieved from https://studymoose.com/comparison-hamlets-reaction-arrival-rosencrantz-guildenstern-new-essay 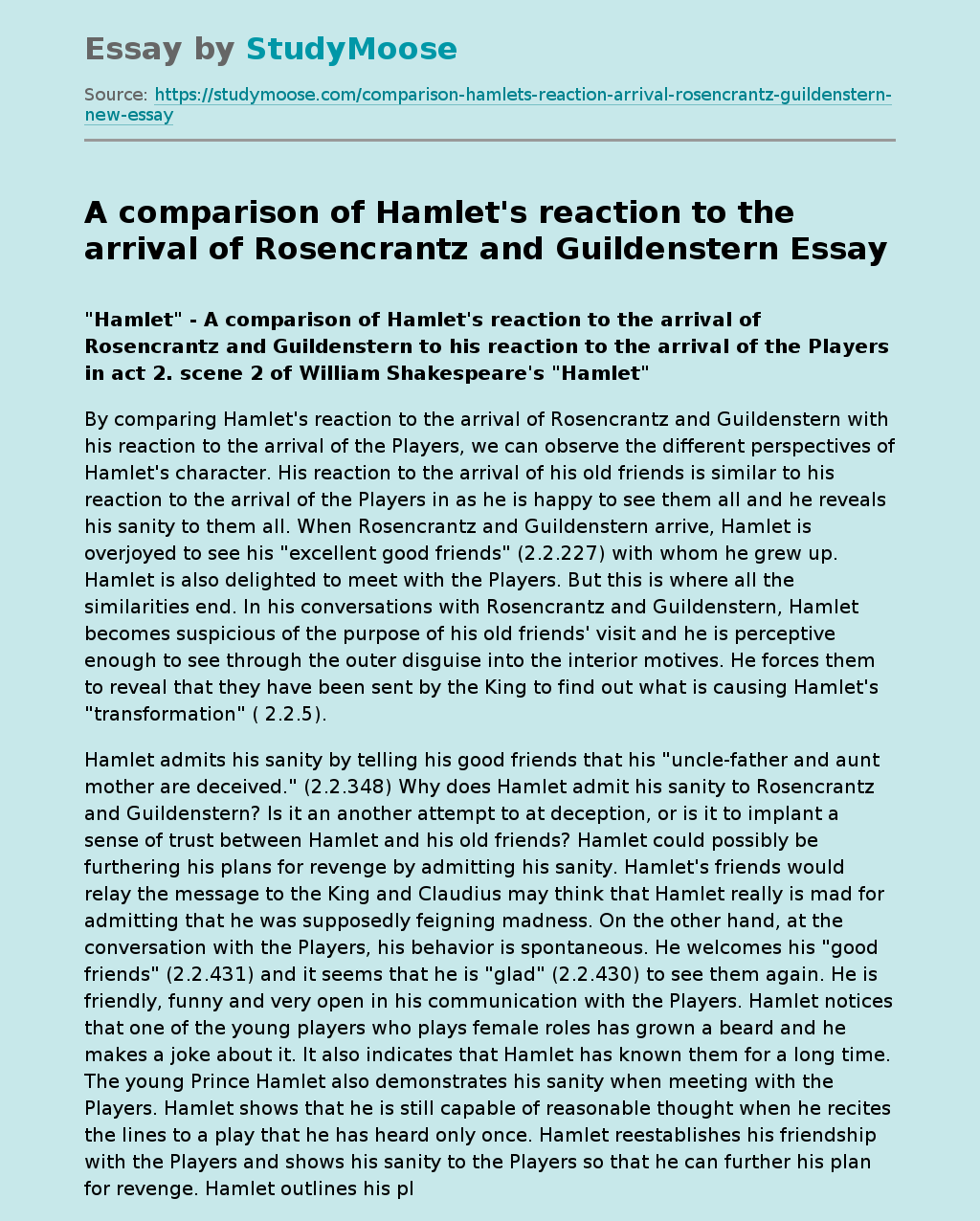