Comparison between Dewey and Montessori Education

In the United States, Montessori is not as popular as Dewey. The name “Montessori” is seen on textbooks. It was learned in educational theory. Because of this, Montesorri is often studied as part of history. This does not mean, though, that Montesorri has not done enough to be recognized today (Enright 21). The Montesorri System Examined is here to blame – a book that, however small, is extremely influential – for it failed to mention Montessori as much as it mentioned the Progressive Method of Education of John Dewey.

Don't use plagiarized sources. Get your custom essay on
“ Comparison between Dewey and Montessori Education ”
Get custom paper
NEW! smart matching with writer

The book was published by Professor William Heard Kilpatrick in 1914 (Enright 26). During this time, too, Kilpatrick was shining as a professor at the Columbia University. It was because of his influence and popularity how the lessons he taught to students became popular. He was more focused on studying Dewey than Montesorri (Enright 21). Montesorri vs. Dewey The approach of Montesorri and Dewey to education was both done in different perspectives. It was through psychological and philosophical approach.

Dewey was focused on enhancing social relationship. He was also concentrating on human imagination and developing it. According to Dewey, it remains highly significant that the development of a human being be maximized while he is still a child. If not, then other factors that contribute to the development of a human being might be stifled if done too late (Enright 22). Montesorri, on the other hand, believed social relationships are enhanced and imagination is developed but only when the intellect is properly developed.

Without working on the development of the intellect, social relationships and imagination will get poor and undeveloped.

Montesorri’s method focused on three areas: the child’s motivation to study the world and considering it a way to master the environment including himself, and the care of the self. The other one is the sharpening and stimulation of the sense which should come early in a person’s life. Kilpatrick supported the study of Dewey and bashed Montesorri’s. Throughout all his teaching years, he criticized the educational method of Montesorri.

Kilpatrick even reached the point of dismissing the sensorial tools of Montesorri since according to Kilpatrick, Montesorri’s study were all based on outdated and obsolete theories (Enright 23). Kilpatrick also said that the materials of Montesorri are too limiting. Her materials are said to restrict the imagination of the child because the materials used by Montesorri are expected to always have a definite result. Dewey, on the other hand, has a collectivist view of the individual, which is the reason why Kilpatrick has praised and supported Dewey.

Kilpatrick was never an advocate of the individualistic view of young person which was a view used by Montesorri (Enright 23). Montessori Today In America, it was the views of Kilpatrick and Dewey that became more known to people. For a few decades, Montesorri’s name was nowhere to be found, or heard. It was through Nancy Rambusch when Montesorri’s name started to be heard again. She rediscovered Montesorri and started the second-wave schools in the US where she thought everything about the method of Montesorri. She also built the American Montesorri Society (Lillard and Vu, 131).

Rambusch was a mother who was never satisfied with life and because of this character, she was able to bump into the readings about Montesorri. She supported the views and methods of Montesorri and started Montesorri schools in the United States albeit having the movement very lacking in promotion or recognition (Lillard and Vu, 131). Books entitled Montesorri Schools in America and The Montesorri Controversy by John Chattin-Nichols were all about the interrelationship of the method of current and past educational controversies and theories that came about between the theorists of the academe, and Montesorri herself.

Another was inside the movement of Montesorri (Lillard and Vu, 131). Surprisingly, Beatrice Hessen’s work on the method of Montesorri was included by the Montesorri Schools in America, which was first seen in The Objectivist. This is actually a study guide that shows the relationship between the method of education of Montesorri and objectivism. The link was later on found out to be a logical and sensible connection for these two given movements (Enright 26). The methods of Montesorri motivate kids to in a free society and stay inside their homes.

This is the same thing that objectivists want to point out. The Montesorri classroom fosters respect for the ideas and properties of other people. More than that, it encourages respect for other people themselves, considering them as individuals or humans. This idea, according to Montesorri, breeds personal responsibility, and more importantly, respectful union or cooperation (Lillard and Vu, 131). Children are not being told to be concerned about all the things they make use of.

They are asked to respect their environment, which can either be their surroundings as they play outside their houses, or when they are inside their classrooms. They are also asked to work on their assignments and projects while carefully making sure that they respect each other (Enright 26). On another level, the ethical and epistemological ideas of objectivism have a theoretical ground that can be seen as affluent. Objectivism is exactly what Montessori needs. It is through the ideas and insights that objectivism has to offer, that Montesorri can develop her study (Enright 26).

Montesorri’s methods are in no doubt quickly developing and strongly thriving because of the help of objectivism to which it is undeniably compatible with.

Comparison between Dewey and Montessori Education. (2016, Sep 23). Retrieved from https://studymoose.com/comparison-between-dewey-and-montessori-education-essay 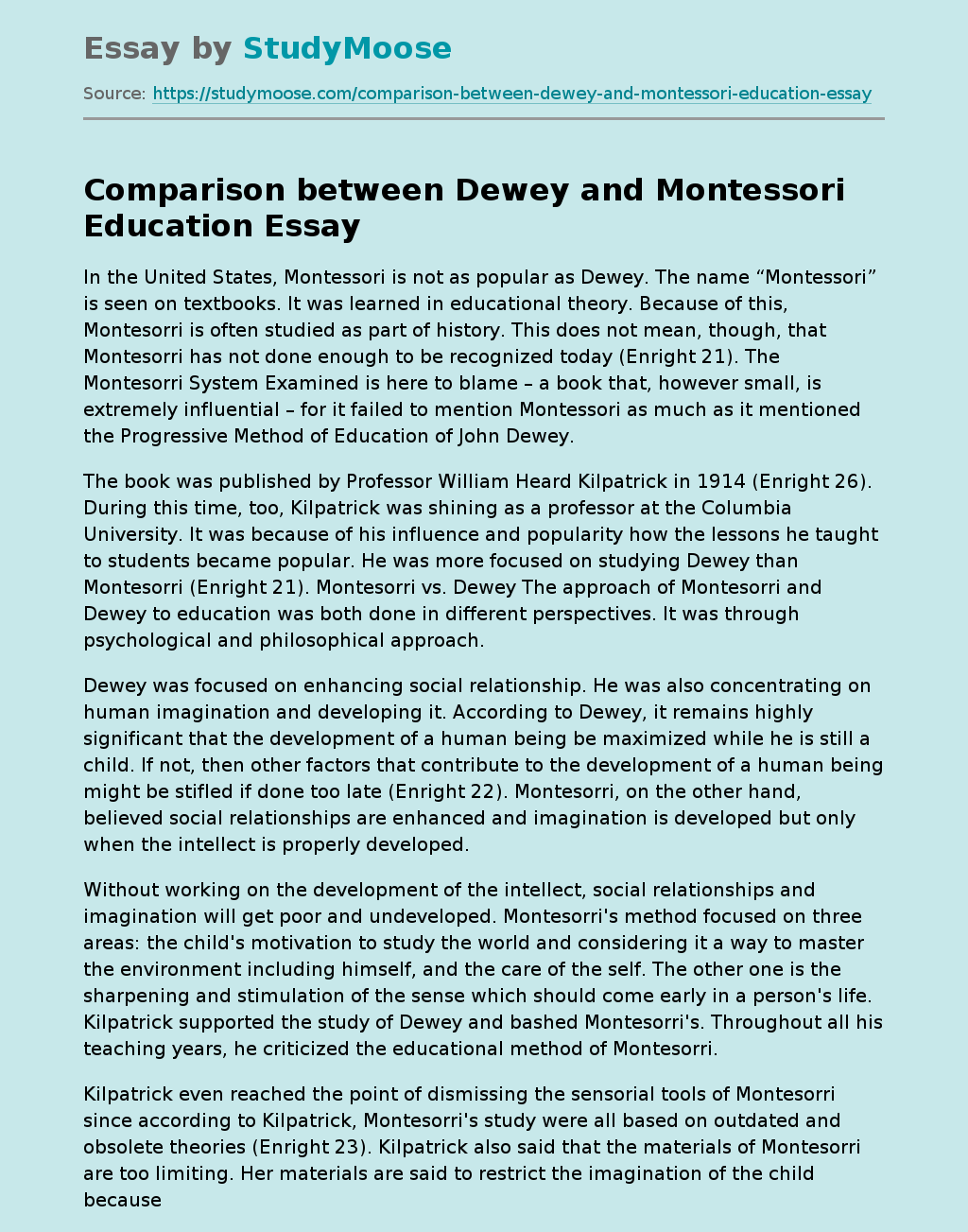