Comparison between cat and human skeleton

At first glance, it might look as if there are very few similarities between a human skeleton and a cat skeleton, However, when you look a little deeper, you find many similarities in shape, structure and function. Evolution has shaped the cat as a hunter and predator. Everything about a cat has been formed to shape a leathal, agile fighting animal. In contrast, the skeletons of humans have formed to provide strength and stability. There are many similarities between the modern-day cats and humans.

Turn in your highest-quality paper
Get a qualified writer to help you with
“ Comparison between cat and human skeleton ”
Get high-quality paper
NEW! AI matching with writer

Like nearly every land mammal, both cats and humans have a well-formed skull and jaw, a vertebral column and four appendages. The most obvious difference between a cat and human skeleton is the size. At nearly 20 times the size of the average domestic cat, a human is a lot larger and way more powerful. Humans are built to walk on two legs.

Therefore, their hips and backbone are shaped much differently and are much more solid than those of the four legged feline.

Although humans are much larger, a cat has roughly 250 bones in its skeleton, compared to the 206 bones of the human skeleton. The extra bones in the cat’s skeleton are found mainly in the backbone, which gives the cat its extra flexibility and agility. A cat has 52 or 53 vertebrae; humans have 32 to 34. These extra bones are spaced out and have more padding, giving the cat flexibility and the ability to twist, turn and spring. Humans have collarbones, while cats do not. However, cats do have a free-floating set of bones in their shoulders that allow them to squeeze into tight spaces.

In both cats and humans, the skeleton provides the same basic set of functions. Because of the density and hardness of bone, the skeleton provides the rigid framework to which other body systems attach. The skeleton determines the basic shape of a body. The skeleton also serves as protection for vital organs, such as the brain, heart and lungs. Because of the structure of the skeleton, it is the basis of all movement. Functioning as an attachment point for all muscles, the skeleton serves as a series of levers and pulleys to push and pull the body into place. Far from being dead, the skeleton houses tons of things that help with production. Human bone marrow produces millions of red blood cells a second, and forms the basis of the immune system. The skeleton of both cats and humans acts as a storage facility for minerals, such as calcium and phosphate.

In the end, cats and humans may seem different but we have more in common than you might think. Stem cells are cells that can grow to become almost any type of cell in your body. They can be taken from different parts of your body and put to use wherever they’re needed. Since they are your own cells there is no chance of rejection. There are two types of stem cells, Adult Stem Cells (somatic stem cells) and Embryonic Stem Cells. Adult Stem Cells can come from the umbilical cord or cells found in bone marrow. Embryonic Stem Cells come from undifferentiated inner mass cells of a blastocyst. These cells are pluripotent, which means they can grow into any cell in your body.

Stem cells are able to repair nerve fiber. Tests on rats have been proved successful. Scientists are trying to figure out how to make stem cells more potent. Experimental surgery has helped thousands on their quest to better health. Umbilical cord blood can be used just the same as regular stem cells. Stem cells can also be used to repair cardiac tissue after a major heart attack. Stem cells have endless potential with very low risk. I think you should be able to receive stem cells if you want. Anyone who needs it should have them readily available. There is basically zero risk and tons of benefit. Stem cells should be used by everyone.

Comparison between cat and human skeleton. (2016, Mar 17). Retrieved from https://studymoose.com/comparison-between-cat-and-human-skeleton-essay 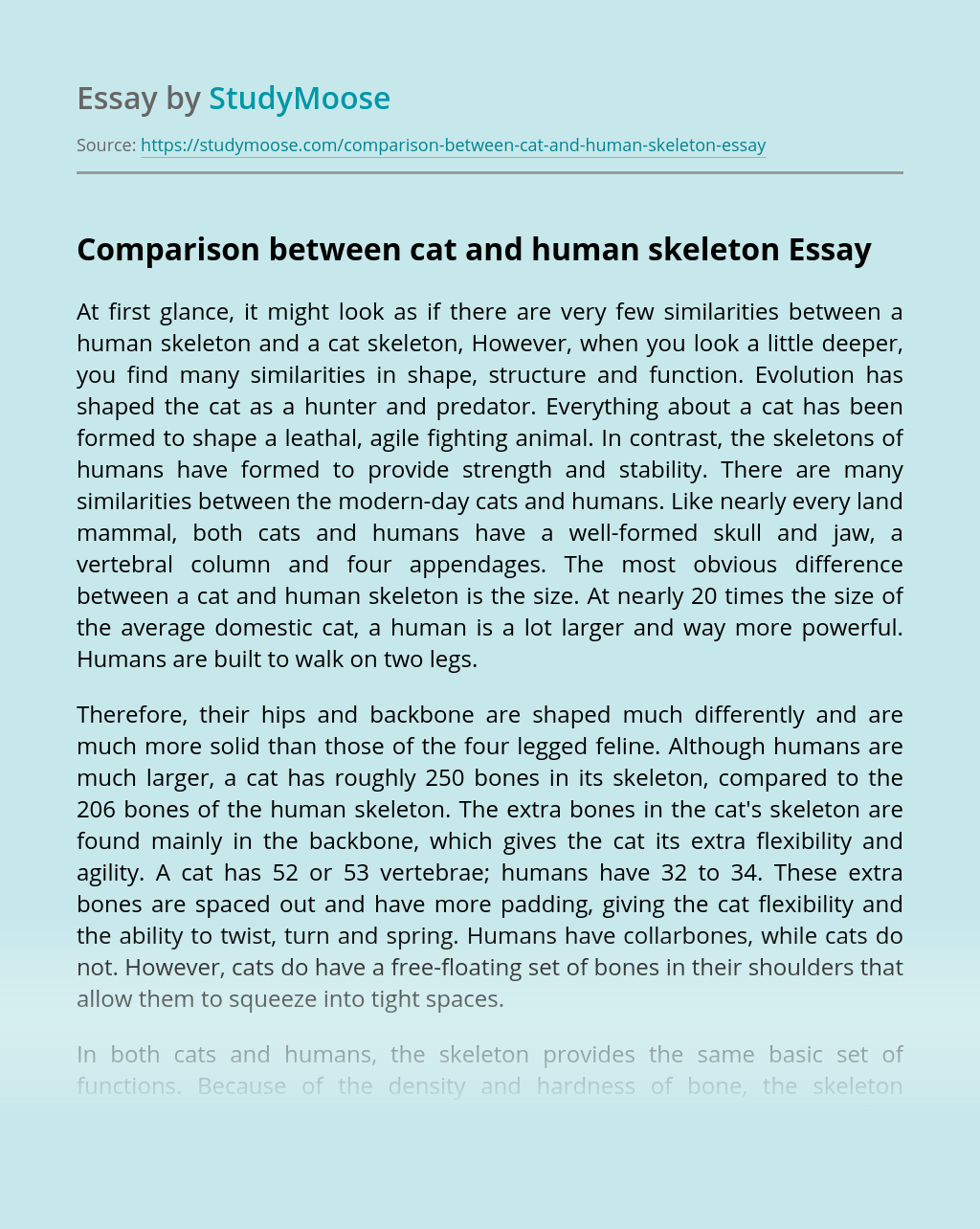 Turn in your highest-quality paper
Get a qualified writer to help you with
“ Comparison between cat and human skeleton ”
Get high-quality paper
Helping students since 2015
Stay Safe, Stay Original