Comparison and Contrast on Theory XY and Z

Douglas McGregor suggested that there are two different ways in which we can look at workers attitudes toward work. Each of these views, which McGregor called Theory X and Theory Y, has implications for management.

Theory X managers believe that workers are only motivated by one thing – money. They are selfish, lazy and hate work. They need to be closely controlled and directed.

Theory Y managers believe that Workers are motivated by many different factors apart from money. They enjoy their work and they will happily take on responsibility and make decisions for the business.

Theory Z makes certain assumptions about workers: People tend to want to build cooperative and intimate working relationships with those that they work for and with, as well as the people that work for them. They have a high need to be supported by the company, and highly value a working environment in which such things as family, cultures and traditions, and social institutions are regarded as equally important as the work itself. They have a very well developed sense of order, discipline, moral obligation to work hard, and a sense of cohesion with their fellow workers. Finally, Theory Z workers can be trusted to do their jobs to their utmost ability, so long as management can be trusted to support them and look out for their well being.

One of the best aspects of theory Z is the long-term employment which would appeal to Americans because they want job security. The collective decision making will create a good work environment and increase productivity. Something that Americans won’t like is the slow evaluation and promotion. Americans don’t like to wait years before they can get a promotion and they would rather get a new job instead. Another great benefit is that the company will have holistic concern for you and your family.

Theory Z also places more reliance on the attitude and responsibilities of the workers, whereas McGregor’s XY theory is mainly focused on management and motivation from the manager’s and organization’s perspective.

Douglas McGregor tends to categorize people as one type or another: either being unwilling or unmotivated to work, or being self-motivated towards work. Threats and disciplinary action are thought to be used more effectively in this situation, although monetary rewards can also be a prime motivator to make Theory X workers produce more. William Ouchi believes that people are innately self-motivated to not only do their work, but are loyal towards the company, and want to make the company succeed.

Theory Z managers would have to have a great deal of trust that their workers could make sound decisions. Therefore, this type of leader is more likely to act as “coach”, and let the workers make most of the decisions.

As mentioned above, McGregor’s managers, in both cases, would seem to keep most of the power and authority. In the case of Theory Y, the manager would take suggestions from workers, but would keep the power to implement the decision. Theory Z suggests that the manager’s ability to exercise power and authority comes from the worker’s trusting management to take care of them, and allow them to do their jobs. The workers have a great deal of input and weight in the decision making process.

Conflict in the Theory Z arena would involve a great deal of discussion, collaboration, and negotiation. The workers would be the ones solving the conflicts, while the managers would play more of a “third party arbitrator” role. This type of manager might be more likely to exercise a great deal of “Power” based conflict resolution style, especially with the Theory X workers. Theory Y workers might be given the opportunity to exert “Negotiating” strategies to solve their own differences.

Comparison and Contrast on Theory XY and Z. (2016, Jun 27). Retrieved from https://studymoose.com/comparison-and-contrast-on-theory-xy-and-z-essay 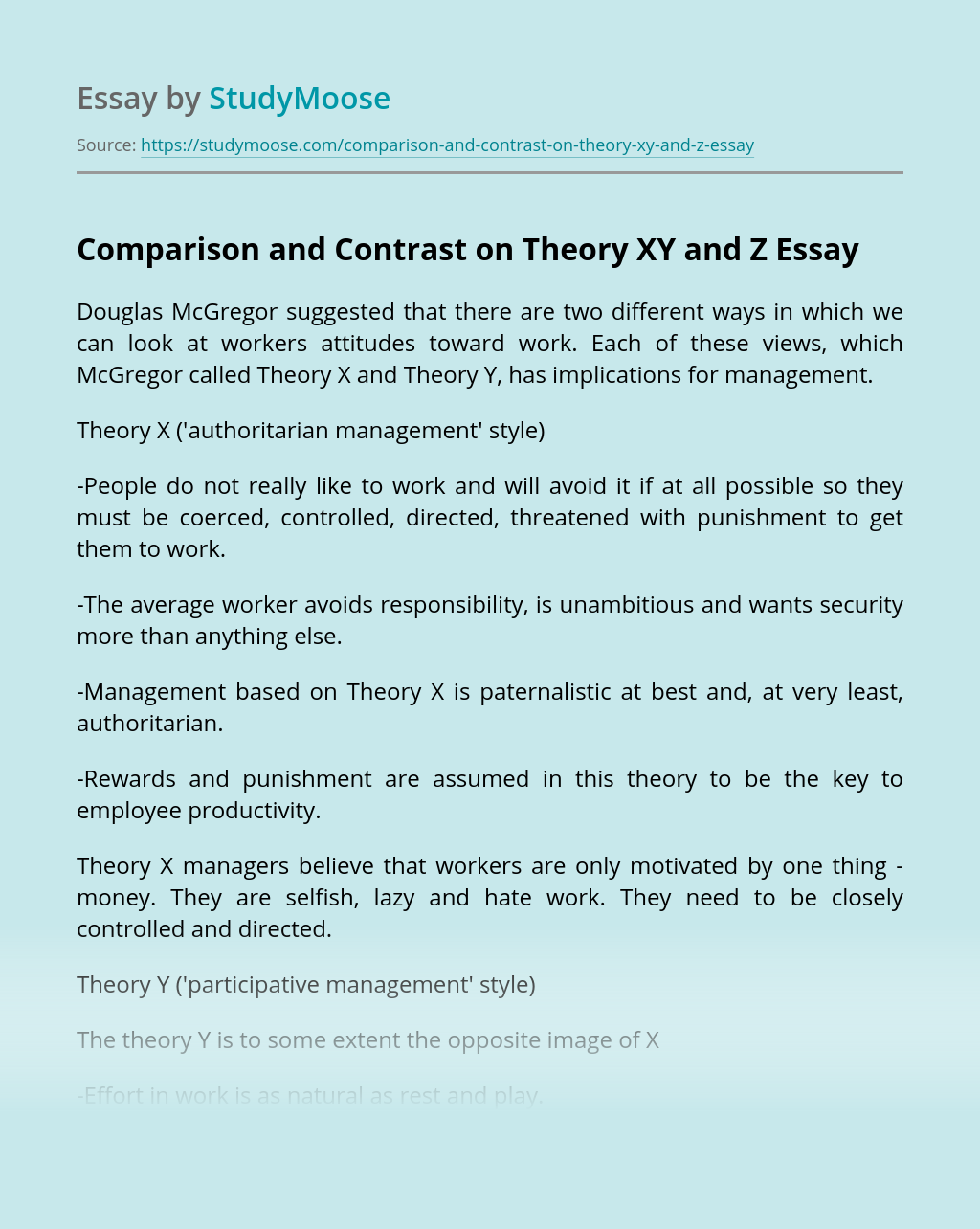 Turn in your highest-quality paper
Get a qualified writer to help you with
“ Comparison and Contrast on Theory XY and Z ”
Get high-quality paper
Helping students since 2015
Stay Safe, Stay Original