In metamorphosis Franz Kafka uses a narrative point of view called third person omniscient, where it is mostly limited since only his thoughts and feelings are presented, however on the other hand in the chronicles of a death foretold Garcï¿½a Mï¿½rquez relates the plot of a murder about which everyone knows before it happens through the use of a narrator who tells the story in the first person, as a witness to the events that have occurred 27 years earlier, Yet the narrator is recounting the tale years later from an omniscient point of view, sharing all of the characters’ thoughts.

Don't use plagiarized sources. Get your custom essay on
“ Comparison and contrast on the narrative point of view in metamorphosis and chronicles of a death foretold ”
Get custom paper
NEW! smart matching with writer

I intend to compare and contrast both narrative point of views in both metamorphosis and chronicle of a death foretold, through affirming the techniques that are used to clarify this point of view such as diction, the use of black comedy, the use of irony etc.

One of the properties of first person narration is that the narrator may be a character who tells the story as he/she sees it.

The fact that a first person narrator tells the story from his/her point of view, in most cases tends to make the narrator unreliable and therefore unbelievable or doubtful for example in the chronicles of a death foretold the narrator states that Santiago Nasar is innocent this shows that the narrator is biased and unreliable. A first-person narrator gives his own point of view but does not know what other characters are thinking this is an ability usually reserved for the third-person omniscient point of view like in metamorphosis.

The third-person omniscient point of view can enter the consciousness of any character therefore making him credible and more reliable than a first person narrator.

In Kafka’s metamorphosis we sometimes see things through Gregor’s eyes, but more typically we see him omnisciently from the outside (from other characters like his father, his mother or his sister) this occurs on page 126 at the beginning of chapter three, this effect causes the reader to feel sympathy for Gregor. This dual effect is extremely powerful in making the reader believe what they read since it is not only one person’s opinion however it is many that say the same things. Limited omniscient narrators are usually unbiased or neutral (which means that they don’t favour any particular characters).

The narrative point of view seems to present a picture of Gregor and the world as he understands it, both before and after his metamorphosis. This does not necessarily mean that all of Gregor’s judgements are to be accepted in fact it is quite on the contrary, Kafka uses irony and black comedy to indicate that Gregor is at times misled, for instance in thinking he can still go to the office even after becoming an insect and, more sadly, in thinking his family is putting his interests first. Since the narrator is omniscient we are given the attitudes and tones of other characters in the book, for example when Gregor’s father first sees Gregor he gets angry thinking that he had lost the only means of providing for his family (page 106) . When we read this we have no doubt that Gregor’s father Mr. Samsa is angry this is called credibility.

The third person omniscient narrator also helps us in getting a clear picture of the surroundings through description. An example of this can be found at the bottom of page 105 the description of the stains on the white doors helps to give the reader a mental picture of the surroundings. Another example of this can be found on pages 119-120 when Gregor’s room is described as “cosy” and “comfortably furnished with old heirlooms”. Another example of the third person narrator’s description of the surroundings is when the narrator describes the view from Gregor’s window as being “melancholy” and quite depressing (through the mention of raindrops and the weather) on page 87. These descriptions all help the reader in understanding Gregor’s pain, suffering and helplessness towards the situation.

One of the most outstanding features of Chronicle of a Death Foretold is the point of view Garcia Marquez uses to tell the story. Narrating the story from the first-person point of view is the unnamed son of Luisa Santiago, having returned to the river village after being gone for twenty-seven years, the narrator tries to reconstruct the events of the day that ends in the murder of Santiago Nasar. In this novel, however, Garcia Marquez makes the narrator telling the story credible towards the end to give the effect of confusion.

The reader is confused about whether the narrator is reliable or not. Even though the narrator isn’t the main character in the text he plays and important roll in the novel as well as in the investigation. The fact that he cannot enter other characters consciousness also complements the fact that first person narrators are unreliable and unbelievable. We do not learn what the other characters are thinking or feeling unless they show us by their words or actions. First person narration can be unreliable due to the limited knowledge and/or understanding of events that have occurred. The author may use this unreliability to give questionable moral values or to make the character or reader biased about the people and events that are described.

The difference between objectivity and subjectivity is the difference between fact and opinion, An objective piece of information, therefore, needs to be the whole truth or at least to be unbiased, whereas a subjective point of view is biased because it is either not the complete picture or it is merely a perspective or an expression of feelings. Depending on whether the narrator is objective or subjective we can judge whether the narrator is reliable or not. If the narrator in chronicles of a death foretold was omniscient he could have given a reliable account of the events that took place after the murder, however since he is biased, he blurs the edges and makes the diseases that the people of the town obtained seem as if they were being punished for not stopping the Vicario brothers.

However, scientifically the diseases had nothing to do with guilt. The narrator in chronicles of a death foretold also creates confusion through giving details that aren’t connected to the murder as well as different versions of the chronological events. For example in the beginning of the text the narrator gives accounts of the weather on the day of the murder and showed that each character gave different versions of the weather according to how each of the characters were associated with Santiago Nasar (page 17), the narrator also gives details that aren’t linked to the murder such as the details given about the wedding (lavish, expensive etc.).

The techniques used to clarify the narrative point of view include the use of irony, black comedy, magic realism, diction and sentence structure. For example in metamorphosis when Gregor attempts to get out of bed, Kafka uses black comedy to give the effect that any topics or events that are regarded as serious or depressing are treated with humor. Another technique of clarifying narrative point of view used by Mï¿½rquez is the use of quotations persistently throughout the text. The word “liberating” on page 107 in metamorphosis, as well as the line “Gregor waited in vain” reflect Gregor’s inner thoughts as the omniscient narrator reveals them, this suggests that the narrator is objective and that the narrator is omniscient.

In metamorphosis the point of view shifts as the corpse of Gregor Samsa is discovered, this shift in the point of view convinces the reader that the Samsa’s had been relieved from an enormous burden. The removal of the “burden” off the Samsa family helps them in planning for the future as if Gregor never existed. This gives the reader the impression that the Samsa’s are cruel and wicked and it also creates a feeling of pity for Gregor.

Comparison and contrast on the narrative point of view in metamorphosis and chronicles of a death foretold. (2017, Nov 15). Retrieved from http://studymoose.com/comparison-and-contrast-on-the-narrative-point-of-view-in-metamorphosis-and-chronicles-of-a-death-foretold-essay 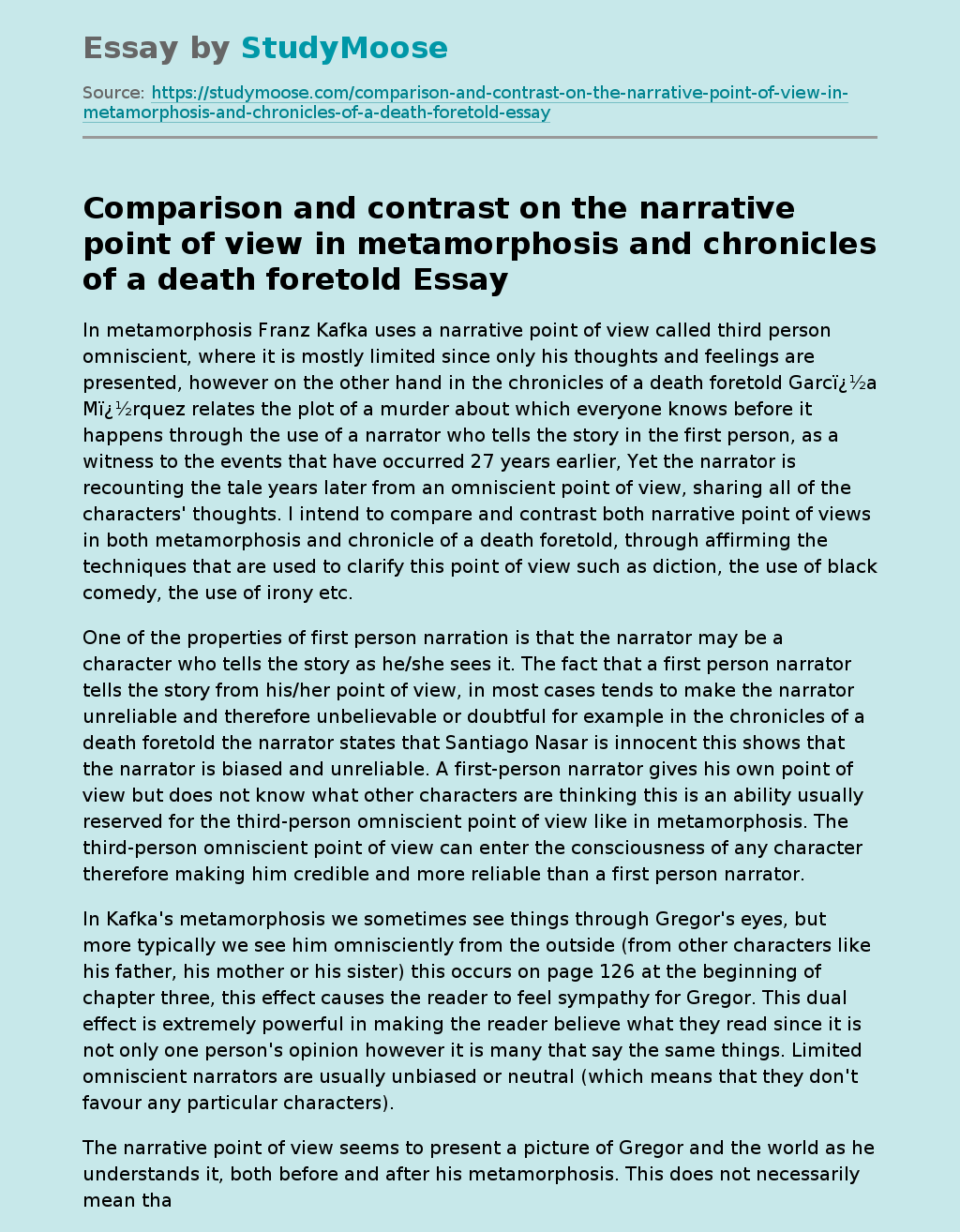