Art, science and literature all grew tremendously during the Renaissance, led by artists like Michelangelo and Leonardo da Vinci, scientists like Galileo, and writers like Shakespeare. In art, the Renaissance renewed interest in naturalistic styles and formal rules of composition such as perspective. The Greek classical ideals of ideal proportions (for depicting the human body as well as for architecture and painting) also regained popularity. Important artists of the Italian Renaissance were with Michelangelo and Leonardo da Vinci. Comparing Works of Art 4

Art Terms of the Renaissance alabaster – A fine-grained, slightly translucent stone with a smooth milk-white surface.

Don't use plagiarized sources. Get your custom essay on
“ Comparing Works of Art ”
Get custom paper
NEW! smart matching with writer

buon fresco – Sometimes called “true Fresco. ” a technique in which pigment suspended in water is applied to wet plaster, A very durable method. chiaroscuro – refers to the fine art painting modeling effect of a strong contrast between light and dark to give the illusion of depth or three-dimensionality. Italian word (chiaro0 and dark (scuro), this technique was widely used in the Baroque period contrapposto – The principle of weight shift in the visual arts.

t’s commonly used to depict a figure in a relaxed stance, one leg weight – bearing, the other bent, the torso slightly shifted off its axis. fresco – painted on plaster. There are two methods, buon fresco and fresco secco. fresco secco – this technique has pigments mixed with a binding agent and painted on dry plaster, and not as durable as a true fresco painted. humanism – it is the movement of the 14th -16th centuries when all the branches of learning, literary, scientific and intellectual were based on the culture and literature of classical Greco-Roman antiquity.

risaille – A style of monochromatic painting in the shades of gray, used especially for the representation of relief sculpture. illusionism – painting which makes two-dimensional objects appear to be three-dimensional. Mannerism – features the use of distorted figures in complex, impossible poses, and strange artificial colors. perspective – refers to the technique of representing the illusion of a three-dimensional world on a two-dimensional surface ( a flat piece of paper or canvas). Renaissance Man – A man who has broad intellectual interest and is accomplished in the areas of the arts and sciences.

A “universal man” or polymath. trompe l’oeil – A French term meaning, “trick of the eye. ” Also known as illusionism. A painting style designed to give the appearance of three-dimensionality. polymath- a person who excels in multiple fields, particularly in both arts and sciences. Another name for “Renaissance Man”. sfumato – this term was coined by the Italian Renaissance artist, Leonardo di Vinci, and refers to a fine art painting technique of blurring and sifting of sharp outlines by subtle and gradual blending of one tone into another through the use of thin glazes to give the illusion of depth or three-dimensionality.

This stems from the Italian word square meaning to evaporate or to fade out. The Latin origin is fumier, to smoke. The opposite of sfumato is chiaroscuro. terribilita – A term applied to the art of Michelangelo describing the heroric and aw-inspiring power and grandeur of his work. Comparing Works of Art 5 Leonardo di Vinci Leonardo di Vinci was born on April 15, 1452, in the small Tuscan town of Vinci, near Florence. Born of wealth of a Florentine and a peasant woman he and his family settled in Florence. He rapidly advanced socially and intellectually.

In 1466 he was appointed as a garzone ( studio boy ) to Andrea del Verrochino, the Leading Florentine painting and sculpture of the day. Leonardo’s stylistic innovations are even more apparent in The Last Supper, in which he re-created a traditional theme in an entirely new way. Instead of showing the 12 Apostle as individual figures, grouped in dynamic compositional unit of three, framing the figure of Christ, represents a calm nucleus while the others respond with animated gestures. The Mona Lisa, His most famous work is well known for its mastery of technical innovations as for the mysterious of its legendary smiling subject.

This work is consummate example of two techniques- sfumato and chiaroscuro- of which di Vinci was one of the first great masters. Sfumato is characterized by the subtle almost infinitestimal transitions between color areas, creating a delicately atmospheric haze or smoky effect. Chiaroscuro is the technique of modeling and defining forms through contrasts of light and shadow: the sensitive hands of the sitter are portrayed with a luminous modulation of light and shade, while color contrast is used only sparingly. Comparing Works of Art 6

Michelangelo Buonarroti, (1475-1564) Michelangelo was born in Caprese near Florence, Italy in 1475 during a time known as the Renaissance. He was a master of sculpture, architecture, painting and poetry. When he was young, he studied Latin Greek,. then he discovered how much he loved to draw. He worked as an apprentice under a well-known painter Domenico Ghirlandaio for 3 years to learn the art of painting. He was most interested in learning how to show physical strength and energy in humans. He also learned about frescoes. Fresco in Italian means “fresh”.

This is a technique for painting murals. The artist paints on wet plaster. As the plaster dries, the painting becomes part of the wall and lasts a very long time. Fresco painting usually takes several painters working together because the work needs to be done quickly before the plaster dries. When Michelangelo was young in Florence, there was much building and growth in the city. He learned a lot about art and architecture from watching churches being built and by seeing sculptures and frescoes that were created for churches.

After Michelangelo worked with the painter Ghirlandaio, he had a chance to work with Bertoldo di Giovannia who was a famous sculptor. During this time he learned about creating beautiful statues from marble. The first statue he created (when he was 24) was called the Pieta. It was so beautiful and is the first work that Michelangelo was famous for. Michelangelo was unmatched and the creator of sublime beauty that expresses the breadth of the human condition yet, in a world where art had flourished only with patronage, he was caught between the conflicted powers and whims of the medical family in Florence and the papacy in Rome.

Another famous statue that Michelangelo created from marble was the famous statue of David which can be seen in Florence. It is over 13 feet high and weighs more than 5 metric tons or 11,000 pounds. Because his work was so famous, Michelangelo was asked by Pope Julius II who was a powerful ruler of the church in Rome, to paint the large ceiling of the Sistine Chapel. Michelangelo was disappointed because he told the pope he was not a painter, that he was a sculptor. 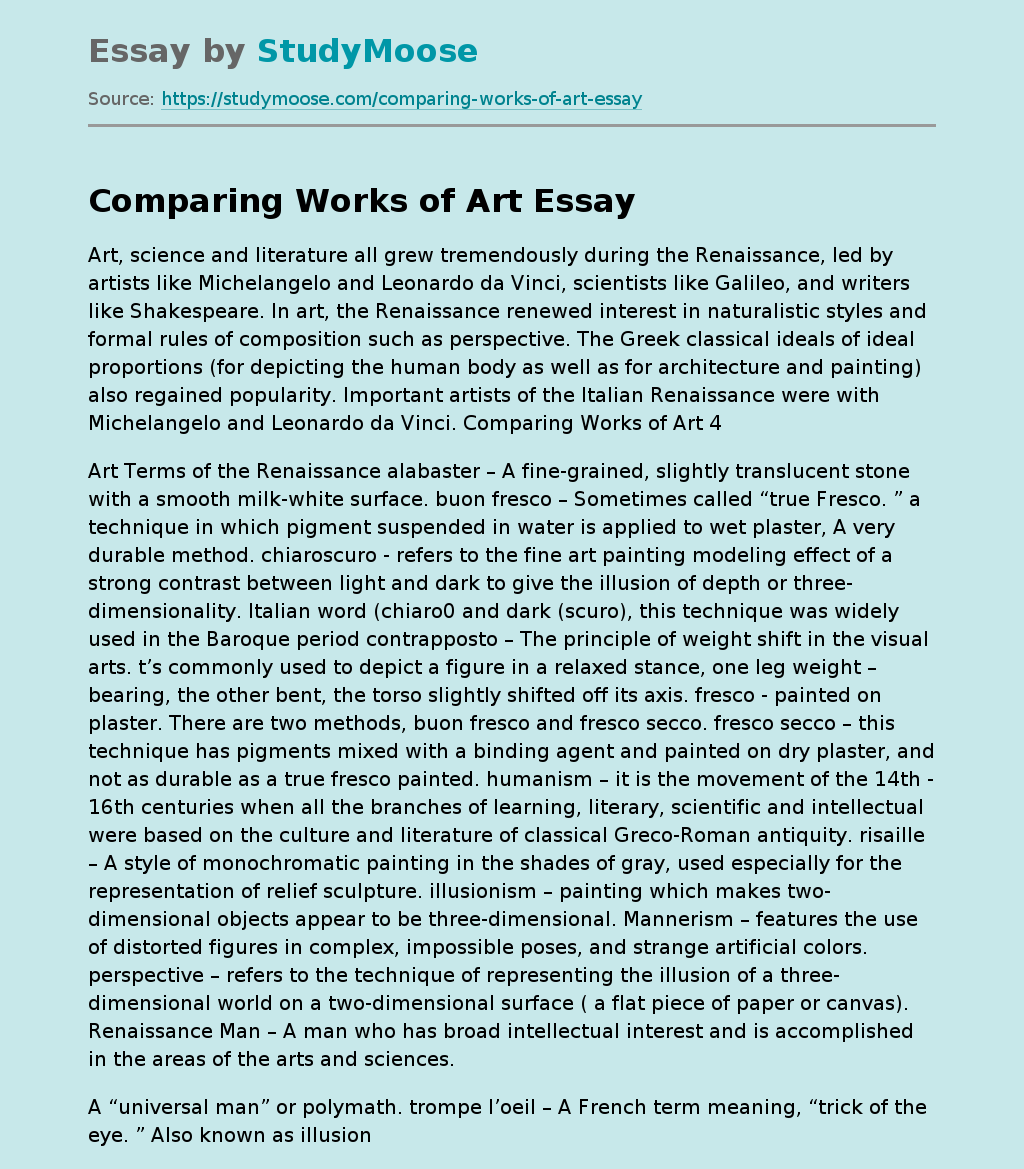