Comparing and contrasting the synopsis “The Matrix” to Plato’s “The Allegory Of The Cave” and also Descartes “Meditation I Of The Things Of Which We May Doubt” which have several similarities and also some differences. In all three of these stories the main idea is that reality is in question. In the Matrix, the human being is in a pod like machine that is controlled by a computer simulating what we think and know to be reality. Reality is not only created but manipulated to deceive what is truly surrounding you, when you are clearly in a pod unaware of what reality really is.

Don't use plagiarized sources. Get your custom essay on
“ Comparing and contrasting “The Matrix” and Plato’s “The Allegory Of The Cave” ”
Get custom paper
NEW! smart matching with writer

In Plato’s “The Allegory of the Cave” this also focuses on two different realities based on what is in fact real and what is perceived. Plato’s view on the prisoners being fooled into a false reality by placing fake objects around them to trick their perception of reality and also put them in a one track state of mind, while life goes on outside of where they are captive.

This is similar to The Matrix because in both stories the people are being manipulated to believe a reality outside of what is truly happening at the present time. In both stories, the person that has been captive for a certain period of time but then is able to experience reality outside of just manipulated perception has doubts, they are in disbelief of what they are actually able to witness for the first time. Reality, not perception but what is truly real happening and not being simulated or manipulated so that you would be fooled into believing something that is not real.

In the Matrix, Neo lived a pretty normal life as an everyday human being but could not sleep well and like Plato stated that the prisoner would have to sense something, get some kind of feeling that something just was not quite right about his surroundings and the way they were existing.

Another similarity is that the prisoners and pods were being manipulated to believe a false reality by people above them. They were prisoners in caves and pods. I think of course a difference is of course time periods. Although these stories have similar ideas, the Matrix was an updated version of ideas of two difference realities. A similarity between the Matrix and Descartes is whether or not we are dreaming or if it is in fact reality and how do we know? Neo is questioned about his dreams and being able to wake from the dream and tell if he was indeed awake or still dreaming and that it was Descartes really focuses on in Meditation.

Once the prisoner is set free, reality for him is shocking because now what you have been exposed to for so long was a lie. Although this false reality was a lie it was not only what was perceived as real to them but familiar. Finding out something like this can be freeing and yet disappointing and scary like it was for Cypher. Once he discovered that they were lifeless humans being manipulated in pods by computers he was terrified and wanted to erase what he found to be reality. Cypher wanted to go back to how things were before he discovered what really happening to him because he could not and did not want to deal with reality. He found comfort in the simulated life he was given.

As far as ignorance being bliss or finding out the harsh reality of illusion, I feel like it depends on the person. I know some people who purposely try to live in a false reality because they just would rather live in a fairytale. They do not want to deal with the harsh realities that come along with knowing the truth. I also know others that no matter how painful or frustrating reality is, knowing what is real and understand what is indeed true is the only way they can function in life.

Comparing and contrasting “The Matrix” and Plato's “The Allegory Of The Cave”. (2016, Sep 25). Retrieved from https://studymoose.com/comparing-and-contrasting-the-matrix-and-platos-the-allegory-of-the-cave-essay 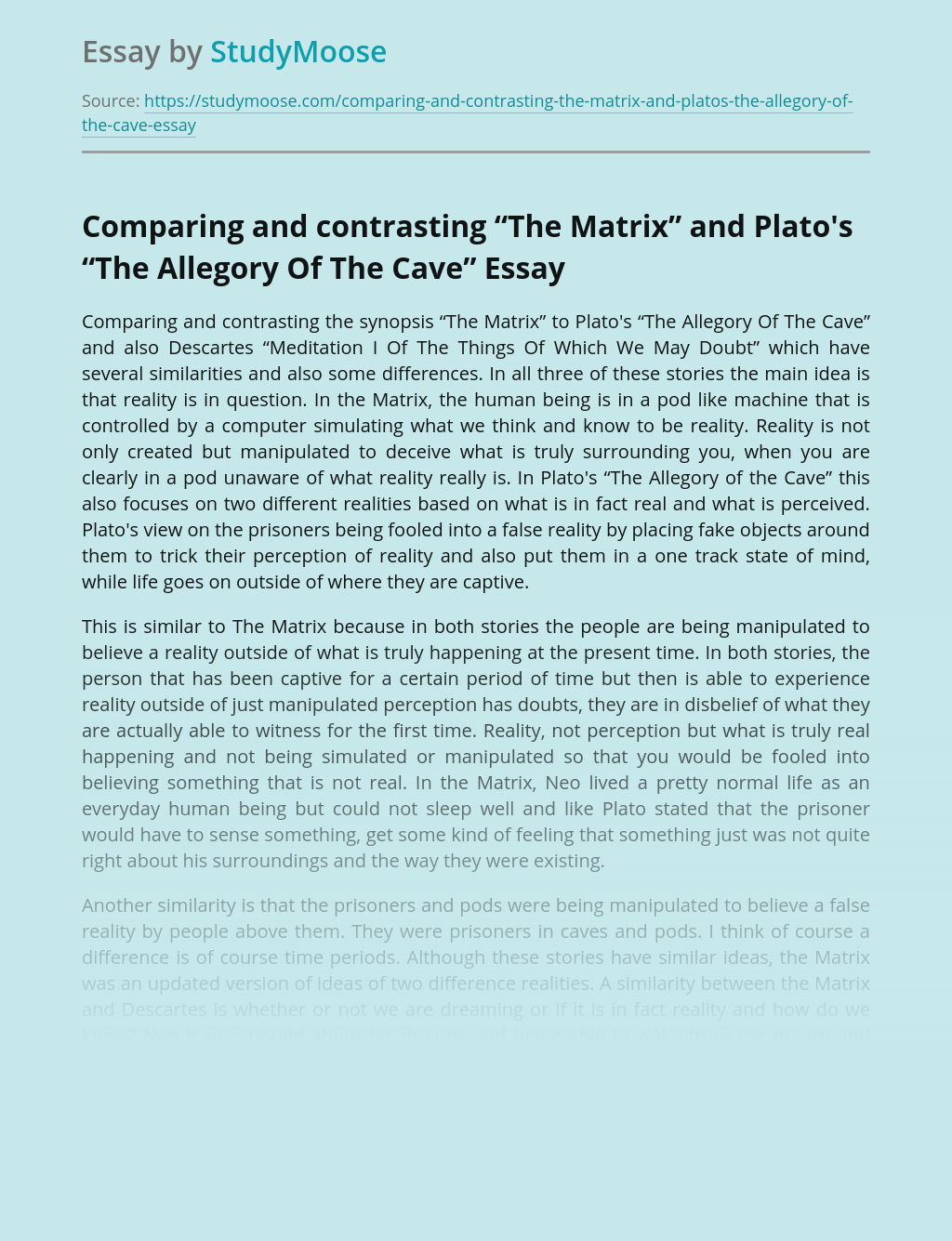