Adolf Hitler, the self-proclaimed “savior” of the German people. He was an insecure, egotistical man, who ominously controlled the German people. Hitler thought that he could change things with force, which soon got him into trouble, and landed him in jail. During his time in jail, Hitler had turned over direction of the Nazi party to Alfred Rosenberg. Rosenberg edited the party’s newspaper, the Völkischer Beobacter (Popular Observer), but had no administrative ability. As a result, Hitler easily resumed complete control of the party upon his release in December 1924.

Don't use plagiarized sources. Get your custom essay on
“ Compares Adolf Hitler to Machiavelli’s “The Prince” ”
Get custom paper
NEW! smart matching with writer

In the years from 1925 to 1930; Hitler built up a network of local party organizations over most of Germany, and reorganized the SA. At the same time he organized the SS, to protect him, supervise and control the party, and perform police tasks. Hitler’s mass of followers began to grow, and soon those who didn’t follow him soon became the minority. Hitler gained political power soon after and his reign of terror began, ending with the deaths of over 6 million Jews that were persecuted by the Nazis, because they were supposedly the problem in Germany.

Hitler indiscriminately followed some of Machiavelli’s principles as described in “The Prince”. Whereas he embraced Machiavelli’s ideas concerning human nature, and separation of politics and morality, he ignored Machiavelli’s concept of military power, which led to his ultimate downfall. As described in Niccolo Machiavelli’s “The Prince”, to be a successful ruler, you must incorporate the principles or guidelines he sets in this pamphlet, three of the most important being, his concepts of human nature, his ideas about separation of politics and morality, and the reality of military power

In chapters XV, XVI, XVII Machiavelli devotes a long time describing aspects of human nature that a prince must understand.

“… And I know that everyone will admit, that it would be a very praise worthy thing to find in a prince, the qualities mentioned above, those that are held to be good; but since it is neither possible to have them or to observe them all completely, because the human condition does not permit it, a prince must be prudent enough to know how to escape the bad reputation of those vices that would loose the state for him, and must protect himself from those that will not use it for him” (Machiavelli, 52).

In other words Machiavelli says that human nature praises certain qualities and blame others, but he says there is no way that human can do all the good things and avoid, and that a prince must figure out how to not take so much blame when he does wrong, and try to do as many good things as he can. For example regarding generosity and miserliness, Machiavelli says to be truly generous, one must be miserly at times.

“A prince, therefore, being unable to use his virtue of generosity in a manner which will not harm himself… should, if he is wise, not worry about being called a miser; for with time, he will come to be considered more generous…” (53) In one finally contrast, according to Machiavelli in regards to courage and cowardice, mercy and treachery he says ” That every prince must desire to be considered merciful and not cruel; never the less, he must take care not to misuse this mercy…Therefore, a prince must not worry about the reproach of cruelty, when it is a matter of keeping his subjects united and loyal” (55). According to Machiavelli, there are times when you don’t worry about doing the right thing, if it leads to the end you are seeking. This kind of thinking is the basis for his ideas concerning the separation of politics and morality.

In essence, Machiavelli’s philosophy concerning politics and morality is this: In order to achieve political prowess (i.e. power, glory, fame) you may need to break the rules, or be immoral. In chapter VIII and IX, Machiavelli describes the ways a man can become a prince. In addition to gaining a fortune, and political prowess, criminal acts and popularity contests can help a man’s rise to power. Machiavelli uses King Agathocles of Syracuse as an example of a man who rose to power through crime (30). King Agathocles rose to power through cruelty, and didn’t care about what was right or wrong (morality). As described in Chapter IX, another means of achieving your political goals is ” When a private citizen, not through wickedness or any other intolerable violence, but with the favour of his fellow citizens, becomes prince…” (33)

He goes on to say ” I maintain that one reaches this princedom either with the favour of he common people or with that of the nobility” (33). Machiavelli’s idea was that a prince needs to please both sides, the rich and the poor, by any means possible. Even if that means telling them what they want to hear, lying, doing whatever is necessary. Machiavelli suggests that it is acceptable to be immoral, if it gets someone what he or she wants. This appears on the surface to be very harsh and cruel, but he tempers his position by saying the one who gains power by treacherous means, may not gain as much glory as the one who gains power by virtuous means. Understanding human nature, and manipulating politics and morality are fine, but the true measure of a prince, is in his ability to wage war.

Machiavelli measured the success of all principalities on their ability to gather an army. Machiavelli judged a prince on whether he could protect himself, or needed the protection of others. ” I say that I judge those princes self-sufficient who, either through abundance of troops or of money, are able to gather together a suitable army and fight a good battle, against whoever should attack them” (37). A strong prince must build strong armies, and there are three types of armies. The princes own troops, mercenaries, and auxiliary troops. “Mercenaries and auxiliaries are useless and dangerous” (42). According to Machiavelli, these troops are undisciplined and disloyal. Machiavelli concludes that the only good army is one that is made up of your own countrymen (48). So important is the waging of war, and the building of a fearful army, Machiavelli suggests that this is the only thing a prince should think about.

” A prince, therefore, must not have any other object nor any other thought, nor must he take anything as his profession, but war, its institutions, and its discipline…it is evident that when princes have given more thought to personal luxuries than to arms, they have lost their state.” (49)

For Machiavelli a prince must devote a considerable amount of time in developing an army by use of any means possible, (once again playing on human nature) training in war time, and in peace time.

The true measure of a successful prince as seen by Machiavelli, is in his ability to manipulate human nature, which involves a balance of contradiction and hypocrisy, achieving your political means morally or immorally, and securing your success by the establishment of a strong army. And if anything you must build a strong army first, in order to use the other two concepts to your advantage. Perhaps if Hitler had adhered to these principles in the correct measure, he too would be seen as a successful “prince.” 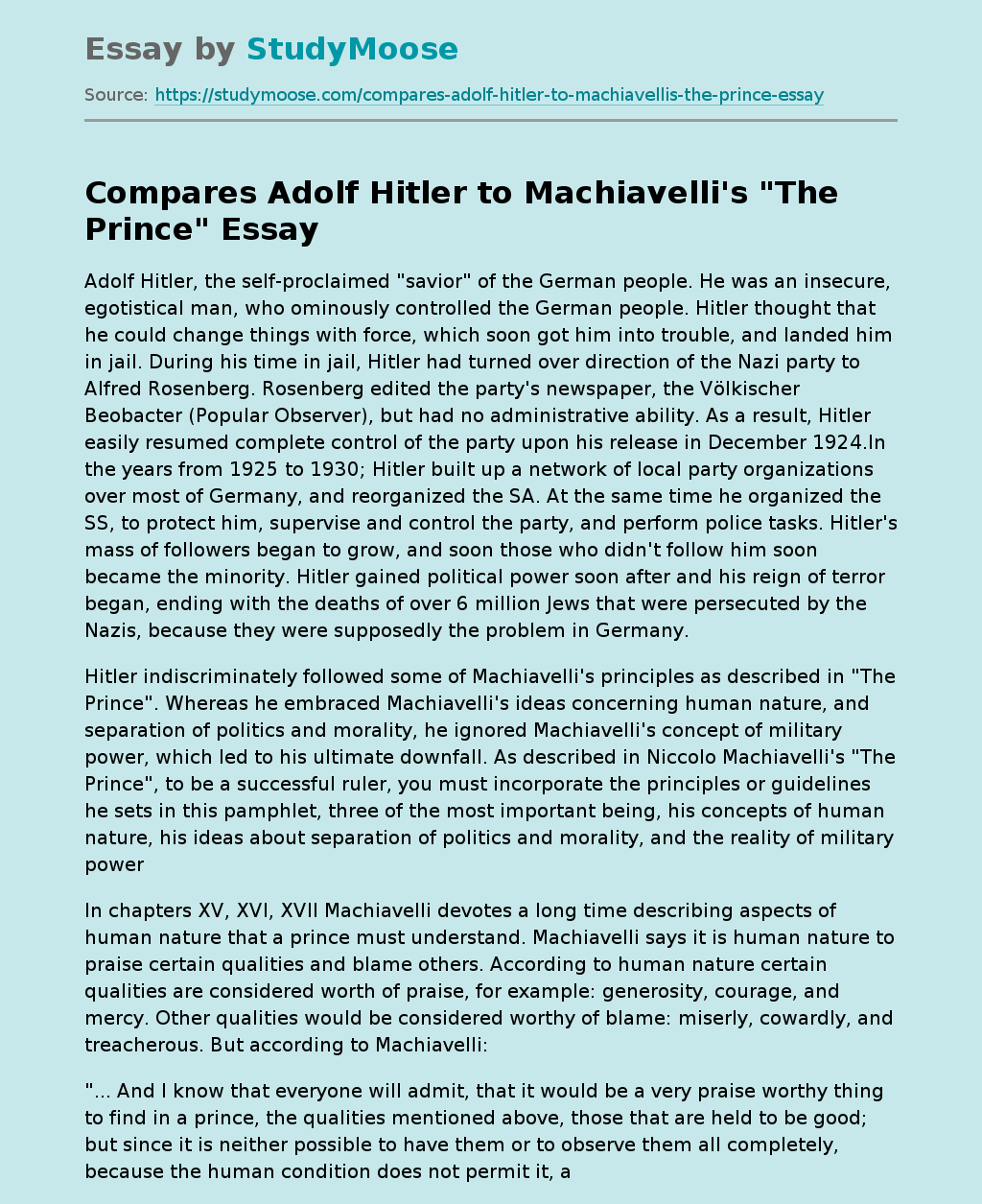