In Willy Russell’s musical “Blood Brothers” he uses contrasting character to portray his ideas on socially disadvantaged people during the 1980s. He champions the poor; he sets his musical in Liverpool where the divide is obvious. By looking at the two mothers, Mrs Lyons and Mrs Johnston the divide, socially clear.

The audience first come across Mrs Johnston when she enters the stage with her back to the audience sweeping and singing. The audience’s first impression of Mrs Johnson conforms to the working class stereotype and her low status.

Don't use plagiarized sources. Get your custom essay on
“ Compare how Willy Russell portrays the two mothers in “Blood Brothers” ”
Get custom paper
NEW! smart matching with writer

This is supported by the fact that she lives in social housing and is down trodden. The lyrics of the song contribute to this. She sings “By the time I was twenty-five, I looked forty-two…” During the song she is describing her past life and how she became pregnant “…the three months on I found myself in the club again…” Before Mrs Johnson finishes her sing, the milkman interrupts her demanding his money “…you owe me three pounds, seventeen and fourpence an’ either you pay up today, like now, or I’ll be forced to cut of your deliveries.

” Mrs Johnston is not quite sure how to reply and tires to reason with him to pay next week. The audience feel sorry for her because she cannot afford to pay her bills.

Will Russell portrays Mrs Johnston as a single parent living in a social housing estate with many children and another on the way. However she doesn’t realise that she is having twins, until further on in the play.

Mrs Johnston’s children like herself; I do no think have a very high education. This is velar by the way they communicate with one another “Ey Mother, I’m starvin’ an’ there’s nothin’ in. There bloody well is.” This quotation also suggests that she doesn’t earn a large amount of money. Mrs Johnston tries to reassure her children by saying “…Next week I’ll be earnin’, we’ll have loads of things to eat…”

On the other hand in act 1 scene 3 we learn more about Mrs Lyons, Mrs Johnston’s employer, she lives in a “rather large” “pretty” house outside of the social housing estate. We first see Mrs Lyons when she enters the room, which Mrs Johnston is cleaning, carrying a “small parcel”. The stage directions tell us she is “bright, breezy, early thirties…” By the way Mrs Lyons talks, it is certainly easy to define that she comes from a wealthier background. Lines such as “Myself I believe an adopted child can become one’s own.” We can relate to Mrs Johnston’s word’s “It’s Weird isn’t it” how someone who seems to have all the material advantages can’t have children “and me I can’t stop having them”.

Willy Russell makes us wonder again about class differences, at the point in the play just after the baby has been born, when Mrs Lyons acts in a superior arrogant way saying “Their born you and you didn’t notify me?” The audience would feel uncomfortable watching Mrs Lyons intimidate Mrs Johnston. We get a further idea of this hearing Mrs Johnston’s response, who backs down and says “You’d better…you’d better see which one you want.” the use of repetition and ellipsis show how nervous and upset she is, and lacking in confidence of being with someone from the upper class.

Will Russell uses a stable member of the public, a policewoman to show how differently people from the working class are treated compared to those of the middle class. This is made obvious by way the policewoman communicates, firstly with Mrs Johnston and then with the Lyon’s family. The policewoman refers to Mrs Johnston as “Love” and the commands her saying “you keep them in order or it will be the courts for you or worse.” She doesn’t see to give Mrs Johnston a chance to talk, only nod. The policewoman address’s Mr and Mrs Lyons by using their surname, she plays it down when talking to them “It was more of a prank really”. I believe that Mrs Lyons is trying to build a friendship with the police woman, by inviting her in for a drink “thank for the drink.”

“Blood Brothers” looks at the differences and conflicts of two different upbringings; poor and rich. Although both mothers seem stereotypical, one representing the poor and the other representing the rich, Willy Russell is obviously championing the poor. There are times in the play where Mrs Johnston qualities seem better than Mrs Lyons, making the audience symmetrises them both, especially when Mrs Johnston gives up one of her babies. The sadness of the whole story is shown in Act 5 Scene 5 with the narrator’s speech,

Only black cards dealt on the thirteenth day.

Two spoons in a cup and an itching knee

Oh Jesus shine light on me

Oh Jesus shine light on me. 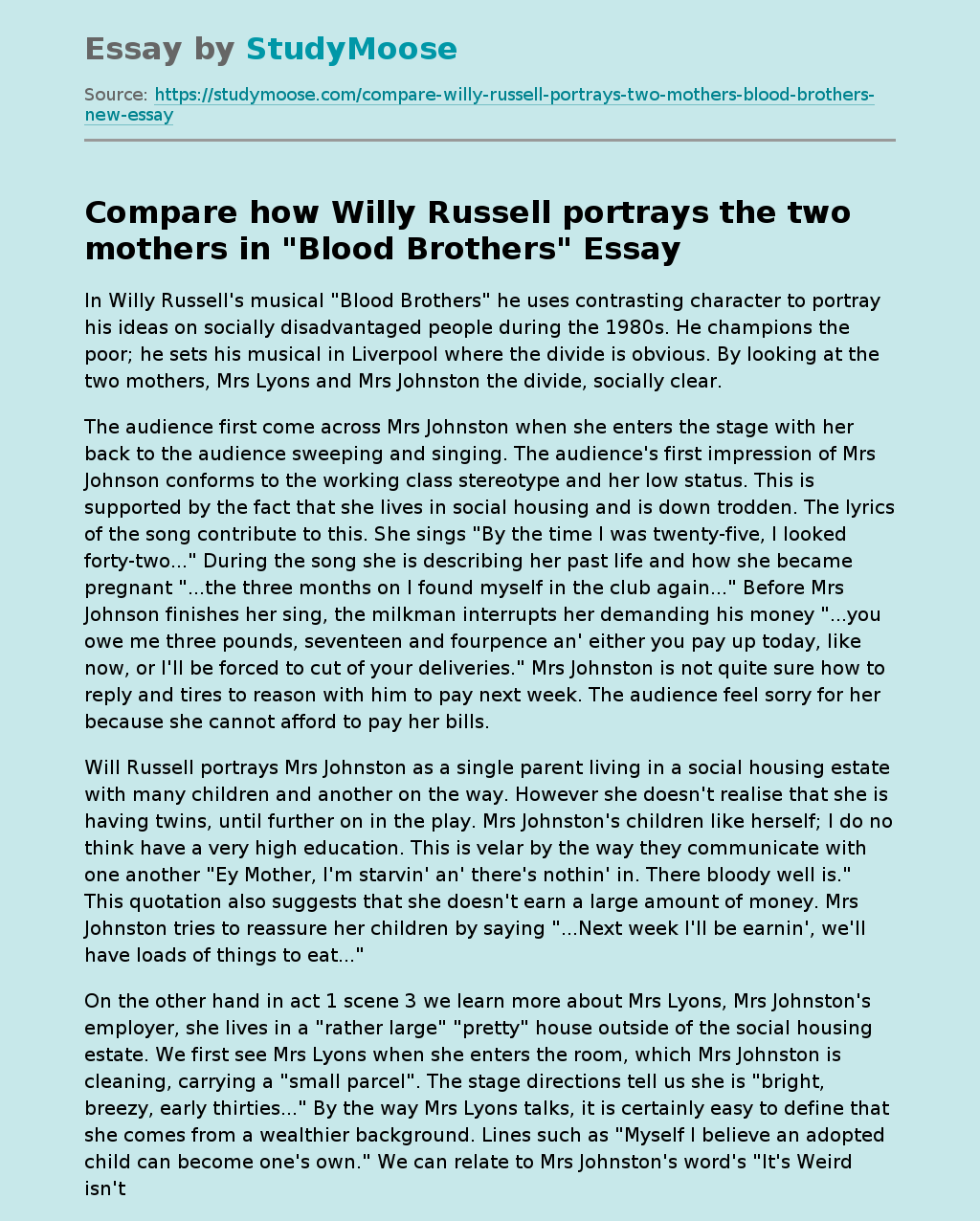